Adolf Hitler is the leader of Nazi Germany during World War II and one of history's most reviled dictators.

He was portrayed by Mikhail Krylov.

The World War II was about to be over and Adolf Hitler didn't know what to do. During the last days of his work, he was spending time in Gestapo HQ. At the first meeting, he receives a small statue of himself as a present from someone. He said that it's precious present and then, he clicked on a hand of statue and there is a small bag of cocaine came out of the mouth of it. He asked Heinrich Müller, a chief of Gestapo to give him a dollar banknote. After when Hitler smelled cocaine, he started to act crazy and check everyone of his officers how are they looking and feeling today.

At the second meeting, he gave his lecture to his officers about how are they going to defeat the Soviet Union. During his lecture, officer Borman and Olaf Schurenberg, a Sovet spy were talking about something funny, but quickly stopped when Hitler notice it. Hitler ordered Shurenberg to walk straight to the board and explain why was his lecture disrupted. Shurenberg said it is an interesting lecture, and then Hitler ordered to repeat everything what he said during the lecture. Shurenberg couldn't resist, so he has done the exactly the same thing, but it was more in his manor.

In the end, he was sitting in the same hall with his wife Eva Braun. They were cleaning the potato and talked about their plans to go somewhere to rest, such as Chili or Dubai. Very soon, they got captured by Shurenberg and his associate and lover Zina. They tied Hitler and Braun up and took away their clothes. In the last scene, Hitler and Braun were lying on the ground in the same hall. 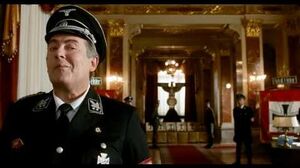 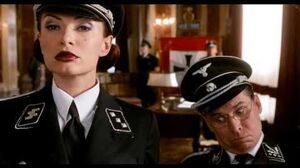