Adolf Hitler is the titular main antagonist of the web animation, Literally Hitler. He is the former chancellor of Nazi Germany who moved in nextdoor to the protagonists' house.

He was voiced by Joe Gran.

While being a passionate artist, he has absolutely no qualms with killing. He only becomes nervous when the protagonists' mom gets in his face to scold and threaten him.

Before Hitler moved into the neighborhood, he was the Chancellor of Nazi Germany with his reason for fleeing might be the ending of the Second World War.

The protagonists, Audrey and Victor, suspect that the new neighbor they would be having dinner with is, in fact, Adolf Hitler. He is first shown in the video when the front door of the house is opened and he introduces himself. He joins the protagonists and their mom for dinner which he has actually poisoned.

When Victor and Audrey start to argue, Hitler turns around and screams at them to stop arguing. Audrey decides to talk back to him which prompts him to make death threats towards both of them. He states that, at first he wasn't actually going to kill them but since they disrespected him, he plans to kill them and their mother.

Audrey and Victor try to fight Adolf until their mother steps in wondering what is going on. All of them have to go with the alibi that they were playing a game called "Kill Hitler."

Hitler prepares to make his poisoned meal of German macaroni and cheese to take out the family. He ends up pulling a knife on the protagonists when they find the idea of Hitler's cooking disgusting.

Victor goes to warn his mother of Hitler being a literal Nazi to which their mother tells him to go to his room. He comes back downstairs to eat the macaroni and cheese and to sacrifice himself to make sure his mother understands Hitler's true nature. When Victor ends up going unconscious from ingesting Hitler's cooking, the mother scolds and threatens him with death for supposedly murdering her son. Hitler manages to escape when Victor gets taken away in an ambulance

Audrey chases after Hitler when he flees the scene to a supposed manions that is merely a display hiding a bomb shelter. Audrey enters it to see a suicidal Hitler with a gun to his head. She tries to have a heart to heart with the man that attempted to kill her brother. She reminds him of his old artwork and asks him why he can't just go back to doing that. Even though Hitler was deeply ashamed of his old artwork, Audrey tells him that it was a part of who he was and should keep doing it instead of causing others to suffer.

In the end, Victor wakes up in a hospital bed to see Audrey waiting for him to wake up. He asks her where Hitler was and she told him that he is somewhere where he can harm nobody. The scene cuts to Hitler composing a fetish painting of Dot Warner from Animaniacs with large stinky feet. 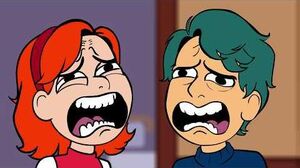 Literally Hitler
Add a photo to this gallery

Retrieved from "https://villains.fandom.com/wiki/Adolf_Hitler_(Literally_Hitler)?oldid=4042601"
Community content is available under CC-BY-SA unless otherwise noted.