Dictator (until his death)

Showing off his military power

He was voiced by Jack Mercer, who also voiced Emperor Hirohito and the Imperial Japanese soldiers.

In "Spinach Fer Britain", a pair of nazis would go around, attacking Popeye. Every time they landed a strike, they would leap out of their submarine, do the iconic salute and exclaim "Heil Hitler!" before leaping back into the sub.

In "Seein' Red, White 'N' Blue", Popeye the Sailor punched a trio of Kamikaze soldiers in the face and his punch resonated across the world in the form of a flying fist with an American flag sleeve. First, the fist traveled to Japan and went up to Emperor Hirohito and knocked him out cold, but then Hirohito quotes "It should happen to Hitler.", which is exactly what the fist went on to do as it flew to Germany.

In Germany, Adolf Hitler was standing in a radio tower, delivering a speech to the German people. Hitler's speech consisted only of him proclaiming "B.O." in a bizarre, atonal, didgeridoo-like voice. The fist came up to Hitler and stopped right in front of his face before doing a Nazi salute. Confused, Hitler did the salute right back. While he did, the fist punched him directly in the face and knocked his mustache off. While this happened, a sign came up saying "Is there a doctor in the house?" with "doctor" crossed out and replaced with "undertaker" in crayon. Hitler got back up and looked around for his mustache. He found it lying on the ground and put it back on his face before dropping back to the floor again. Just then, Hermann Göring came in and picked up Hitler. Hermann worried for Hitler's well-being and begged him to speak to him. Hitler got back up and once again quoted "B.O." in his weird didgeridoo voice before dropping back to the floor again.

In "Her Honor the Mare", Popeye's nephews tricked Popeye into letting him keep a pet horse in the house by disguising him as a painter, who was supposedly coming over to give the house a fresh coat. Popeye's newphews dressed up the horse's butt and painted a face on it and then used a pulley to hoist the horse up their house. As the horse passed by Popeye's kitchen window, its butt was on display and depicted on it was the face of Adolf Hitler, a visual pun that suggested Hitler is an "ass". Accompanying this gag was a polka-style instrumental version of the nursery rhyme, "The More We Get Together", which juxtaposed Hitler's world views of war and discrimination. When Popeye saw this the fuhrer's face, he tipped his hat bid him a "How do you do?", none the wiser.

Adolf Hitler is an adult German man with light Aryan skin and dark raven hair. He has a little toothbrush mustache under his nose, which he is quite proud of. He wears a Nazi general uniform complete with a hat with a Nazi Eagle logo, an open-collared buttoned NSDAP jacket that rides a bit too big on him, a dark undershirt, black tie, dark pants, dark boots, and a too loose belt with an oversized buckle. The exact color composition of his uniform is unknown given he appeared in black & white, but it's presumably supposed to be coffee brown or gray-green, as were the colors of Hitler's wardrobe in real life. He speaks in a deep digeridoo-like voice.

Adolf Hitler is portrayed as a somewhat goofy, cartoonish, and watered-down stereotype of his true self, by means of demeaning and insulting the real Hitler. He is a wears clothes that are comically too big for him and is depicted as a nonsense-speaking man with nothing of value to say, as implied by his microphone reading "Blah" or more overtly, him only quoting "B.O." in a wacky sailor's foghorn-style tone. He is very fond of his mustache and when it was knocked off his face, he panicked without it and passed out on the ground. During the short time we see him, he doesn't demonstrate much character but we do learn through his actions, (leading Nazis and Kamikazes to war in WWII), that he is a hateful, violent, bigoted dictator, who aspires to eliminate all races and creeds he sees as inferior off the planet and to take over the world with his global empire of Nazism. 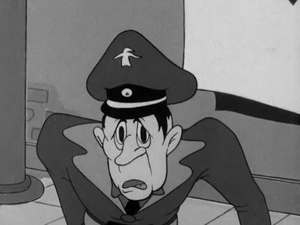 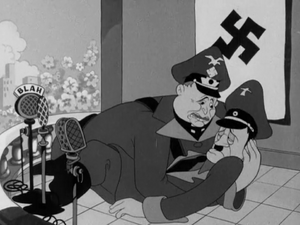 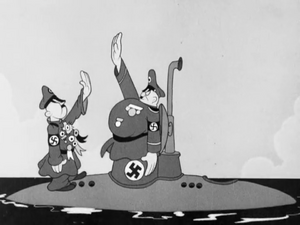 Hitler's Nazis as they appeared in "Spinach Fer Britain". 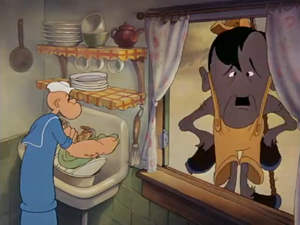 Hitler appears on a horse's rear end in "Her Honor the Mare".
Community content is available under CC-BY-SA unless otherwise noted.
Advertisement