Hitler: The Rise of Evil

Adolf Hitler was an Austrian-born German soldier of World War I. He would eventually take over Germany and launch World War II and the Holocaust against the Jews.

He was portrayed by Robert Carlyle - who also played Francis Begbie in Trainspotting, Renard in The World Is Not Enough, Durza in Eragon, and Rumpelstiltskin in Once Upon a Time. In Hitler: The Rise of Evil, a fictionalized portrayal of the dictator's life from childhood to becoming the leader of the Third Reich.

Adolf Hitler was born in April 20, 1889 and raised in Austria by Alois and Klara Hitler. He was close to his mother, who doted on him, but disliked his father, a gruff disciplinarian who wanted his son to follow in his footsteps as a civil servant. Growing up, Hitler believed he was destined to be a great artist, but he was rejected by several art schools in Vienna. With no skills or education, he was soon living on the street. He was greatly influenced by the anti-Semitism widespread throughout Vienna at the time; he blamed his misfortunes on "International Jewry", believing that Jews were conspiring to undermine his beloved Germany and deny him the success and happiness that was his by right of birth. His anti-Semitism intensified when his beloved mother died while being treated by a Jewish doctor.

When World War I began, Hitler eagerly signed up for the German Army instead of his native Austria, serving in the 16th Bavarian Reserve Infantry Regiment. On October 29, 1914, he allied artillery in Belgium decimated Hitler's units. After surviving the "baptism of fire", Hitler received the Iron Cross and was promoted to Gefreiter (Corporal) by Lieutenant Hugo Gutmann, whom Hitler would learn was Jewish. When the Imperial German Army was only 30 miles from occupying Paris, Gutmann arrived to inform Hitler that he and his squad were being deployed to the Eastern Front. Hitler protested, saying it would have the appearance of retreating. Gutmann replied that it was the orders of General Paul von Hindenburg, later the 2nd President of Germany. Hitler felt betrayed by Gutmann, who he had come to think of as one of the "good Jews".

Soon afterward, Hitler was wounded in a mustard gas attack. Blinded, Hitler was sent to Pasewalk Military Hospital, where he demanded to be sent back to the front, while most men would be sent home. On November 10, 1918, he was still recovering when the German Empire surrendered to the Allies, to Hitler's horror. Upon hearing the harsh economic penalties of the Treaty of Versailles, which would destroy Germany's economy, Hitler ripped the bandages off his face and declared that it was the beginning, not the end.

30 years later in April 1919, Hitler witnessed the Freikorps militia overthrow the short-lived communist Bavarian Soviet Republic. Hitler remained in the Army, the Reichsheer. In September 1919, he was commanded by the head of Abwehr (Army intelligence) to spy on the more aggressive of the more than 50 post-war nationalist parties, such as the German Workers' Party, lead by Anton Drexler. During one meeting, Drexler was making a speech where he recommended the Free State of Bavaria secede from Germany and become an independent nation. Hitler interrupted to condemn the idea and preach about the "purity" of the German people. Hitler's fiery oratory, replete with stories of Germany's greatness and condemnations of Jews and Communists, impressed Drexler, who made Hitler the party's official spokesman.

Hitler soon became a popular speaker, connecting with a German public who felt betrayed by the Treaty of Versailles and longed for an idealized time of national honor and prosperity. In 1923, he led a failed coup against the German government and was sent to prison, but his popularity only grew as he presented himself as a martyr for Germany. He gradually pushed Drexler out and turned the German Workers Party into the National Socialist (Nazi) Party, and led it along with his chief lieutenants - Hermann Goering, Joseph Goebbels and Ernst Röhm. Hitler was also aided by Ernst Hanfstaengel, a wealthy businessman with political connections who introduced him to Germany's elite.

Around this time, Hitler took in his half-sister Angela Raubal and her daughter Geli. Hitler became obsessed with Geli and kept her under lock and key, refusing to let her have friends or a boyfriend and insisting she be at his side as often as possible. When he discovered that Geli had been secretly dating his chauffeur, Hitler had the young man beaten up. Eventually, Geli was found dead of an apparent suicide, although her mother suspected that he had the girl killed out of jealousy.

By 1932, the Nazi Party had a majority in the Reichstag, and Hitler became Chancellor over the objections of President von Hindenburg. At this time, a rift developed between Hitler and Röhm, who wanted greater power for the German Army; Hitler eventually had him killed. After the Reichstag building was destroyed in a fire (which may have been set by the Nazis themselves), Hitler used the crisis to have parliament grant him expanded powers, effectively making him a dictator. 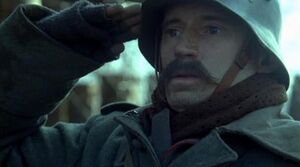 Hitler saluting Hugo Gutmann during WWI.
Add a photo to this gallery
Retrieved from "https://villains.fandom.com/wiki/Adolf_Hitler_(Rise_of_Evil)?oldid=3782128"
Community content is available under CC-BY-SA unless otherwise noted.