Kill all the Jews (failed mostly)

Adolphus "Adolf" Hitler was a 1940's German dictator, who led an army of Nazis to take over the world and kill all the Jews. Despite his minimal appearances serves as a major component to the overall plot of the YouTube web series, Super Science Friends.

The series mainly takes place in 1941, during the Holocaust. Although Hitler, himself, rarely appears, his presence in the series is very important to the plotline as major/recurring villains such as Obergruppenführer, The Nazi Clones, and Hitlerbot all do their crimes in his name.

In "A Super Science Friends", a time shift happened, which sent the world into a state, where Adolf Hitler had won WWII and taken over the world. Winston Churchill had to set things straight so we went back in time to where this alternate timeline first started and organized all of the other Super Science Friends to go to Austria on the Christmas of a year when Hitler was just a little boy. While Hitler was spraying his toys with perfume in a cage, he heard the sound of Winston Churchill coming down the chimney, dressed as Santa. Winston convinced Hitler that he was really Santa to make him happy. While Hitler was off guard, Churchill pulled a gun on Hitler and shot him dead and then escaped with the rest of the crew, who had served no purpose the entire mission. 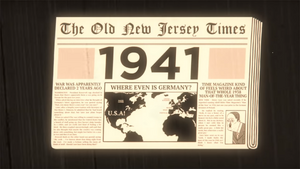 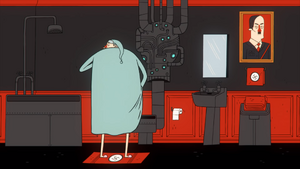 Add a photo to this gallery
Retrieved from "https://villains.fandom.com/wiki/Adolf_Hitler_(Super_Science_Friends)?oldid=4101099"
Community content is available under CC-BY-SA unless otherwise noted.