Chairman of the National Socialist Party

Ruler of Nazi Germany and the Third Reich

Exterminate all Jews.
Suppress all opposition to his regime (both failed).

He was voiced by Norbert Weisser in The New Colossus.

Hitler appears as the final boss of the game, as Mecha-Hitler. He fights the player in a mecha suit equipped with gatling guns on either side. After his mech suit is destroyed, Hitler will continue fighting the player until he is disintegrated, letting out "Auf Wiederschen" before his demise.

While a "Fuhrer" is mentioned in several newspaper clippings, Hitler makes no appearances within the game and the main antagonist is instead General Wilhelm Strasse. A gold mask resembling an impression of Hitler's face can be found on the moon base as a collectible however.

Hitler is revealed to be still alive and at Venus in this game, where he is producing a movie that features him defeating B.J. in a mech suit. He has Lady Helene bring four actors to audition for the role of B.J. (one of whom is ironically B.J. in disguise as an actor named "Jules Redfield"). During the audition, Hitler kills one of the actors out of paranoia he is a Jewish spy and later executes another for delivering an underwhelming performance. He eventually approves B.J. for the role after he becomes impressed at him killing a volunteer soldier, oblivious to his true identity.

By the time of The New Colossus, Hitler has become frail and senile. He appears to have gotten increasingly more paranoid due to his deteriorated mental state, going on a mad rant about Jewish spies in the middle of the audition and executing one of the auditioning actors out of suspicion he is a Jew. He is shown to have a very slim grasp on reality, mistaking Helene for his mother Klara at one point. His delusions even seem to have caused him to believe that the version of events depicted in his movie where he kills B.J. is the truth.

Adolf Hitler in Beyond Castle Wolfenstein. 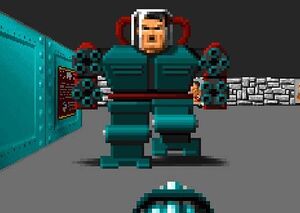 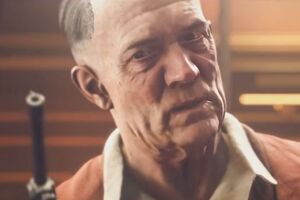 Adolf Hitler in the censored German version of The New Colossus.