Cover the world in darkness.

Turn everyone into mindless zombies under his command.
Kill the resistance (all failed).

Adolf Hitler is the main antagonist of the 2015 game Zombie Army Trilogy and its 2020 sequel Zombie Army 4: Dead War.

Near the end of the Second World War, Germany faces defeat at the hand of the Allies. Unwilling to allow Germany to fall, Hitler takes a final desperate gamble and activates "Plan Z". He uses the Sagarmatha relic to unleash occult forces to raise the dead, as zombies, making him the Vanguard of the Apocalypse.

This comes at a price, however, as without all three pieces of the relic, Hitler was not protected from the undead hordes and killed when the zombies raided his stronghold. Three months later, Hitler became a demonic version of himself, able to control the zombies. Now with renewed confidence, Hitler addresses the zombies in the ruins of a destroyed Berlin (the building of the meeting affected by the USAAF bombing) his plan of conquering the world and repopulating it with the undead.

Several members of the Survivor Brigade travel to Hitler's location, and find him addressing the Zombies at a podium. Karl Fairburne sees the opportunity to finish Hitler once and for all, and fires a round from his sniper rifle at Hitler. The bullet is stopped by some psychic influence, showing a degree of Hitler's new power. Drawn to the sound of the bullet, the zombies turn to attack the group. But the Sagarmatha Relic is used to force Hitler to stand down. Begrudgingly, Hitler allows the group to leave unharmed.

Hitler moves to the Hellmouth to begin the final preparations to his attack. However, the Survivor Brigade return, with the complete Sagarmatha Relic. After sending countless zombies after them, none of which kill them, Hitler resorts to finishing the team himself. Once the Survivor Brigade reach the Hellmouth, Hitler combines with the powers of Hell to transform into a giant demonic version of himself. He summons even more zombies to kill them, but is eventually defeated, and reverts back to his zombie form. Fairburne tosses Hitler into the Hellmouth, down into the fiery pits of Hell.

After Hitler was thrown into the pit of Hell, he began to rule Hell with his new zombie army. He began to work on a mighty machine that would destroy every city he laid his eyes upon. He was finally summoned in Rome by four occultists. The new squad including Karl were sent to hell by Hitler himself where they battled until they returned to the Vatican.

The squad were met with Hitler and his new massive Hell Machine. However, the squad were able to destroy the tank which caused Hitler to summon swarms of Hitler soldiers. As the squad made quick work of his minions, Hitler dropped to his knees and pleaded for mercy. Karl beat him with the Sagarmatha Relic before finally plunging it into his heart and ending the apocalypse. 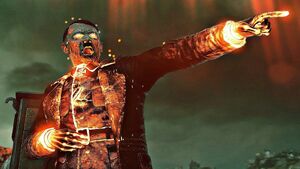 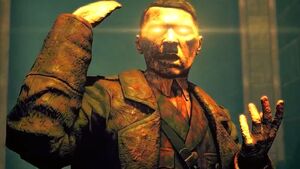 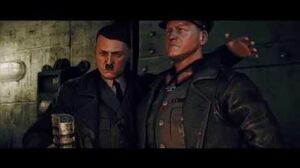