Conning people with a fake elixir

Get rich at any costs (possibly, failed).

Adolfo Pirelli, formerly known as Daniel O'Higgins and Davey Collins, is a supporting antagonist of the 1979 musical Sweeney Todd: The Demon Barber of Fleet Street and the 2007 live-action film of the same name. He is a barber who acts as a rival to Sweeney Todd until his death.

In the film, he was portrayed by Sacha Baron Cohen, who also portrayed Mr. Thenardier in the 2012 film Les Misérables and Admiral General Aladeen in The Dictator.

Pirelli is first introduced as an Italian barber who is "all the rage" in Victorian London. He is very theatrical and dresses in extravagant clothing, and mercilessly beats his young apprentice Tobias Ragg for the slightest imperfection, and often for no reason at all. Pirelli also claims to have shaved the King of Naples and the Pope, arrogantly referring to himself as "the King of the Barbers and the Barber of Kings." As part of his act, he pretends to be a devout Christian, at one point praising God for bestowing the gift of talent upon him.

When Todd and his accomplice Mrs. Lovett are in the town square, they witnessed Tobias selling a concoction of Pirelli's entitled Miracle Elixir, which is purported to stimulate the growth of hair. However, Todd takes one sniff of the mixture and denounces the Elixir as "an arrant fraud" concocted of "piss and ink."

Enraged, Pirelli emerges from his tent to berate Todd, who challenges him to a shaving competition: whoever shaves a person the fastest and the closest will win five pounds. To that end Todd gets Beadle Bamford to act as the judge of the competition. Pirelli wastes time bragging about his vast talent and superiority over all other barbers, while Todd actually concentrates on doing the job and, after carefully preparing his razors and mixing the lather perfectly, shaves the customer in a matter of seconds, and promptly wins. As such, Pirelli is reluctantly forced to pay five pounds to Todd before taking his anger out on Toby, much to Mrs. Lovett's disgust.

The following day, Pirelli and Toby arrive at Mrs. Lovett's Meat Pie Emporium to visit Todd, whose establishment is above Mrs. Lovett's. While Mrs. Lovett gives Toby a pie downstairs in her parlor, Pirelli ascends the stairs to Todd's room to confront him. Pirelli reveals that his real name is Daniel O'Higgins and he is in fact Irish. He reveals that he knows Todd's true identity as Benjamin Barker, having served as his apprentice as a small boy, and threatens to expose Todd to Bamford and his master Judge Turpin unless he pays him half of his profits. In a rage, Todd beats Pirelli up and throws his body in a trunk when Tobias enters the shop. While speaking to Tobias, Todd notices that Pirelli's hand is sticking out and feebly moving. After sending Toby downstairs, Todd finishes Pirelli off by slitting his throat. Mrs. Lovett later takes his coin purse, where she finds three pounds, keeping the purse as her own. 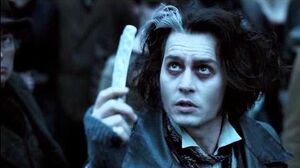 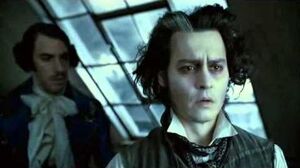