Ruler of the Gamma

Performing a sacred prayer to the Gammaizers to keep peace in the World of Gamma.

Purify the human world and convert it into a mirror image of the World of Gamma via the Demia Project (formerly).

Expedite and learn about human world while searching for cure for the Gamma.

Adonis is a major antagonist in Kamen Rider Ghost. He is the ruler of the Gamma and father of Argos, Alia, Adel and Alain.

He is portrayed by Hiroshi Katsuno.

Adonis was originally the ruler of a small village in the distant past. He had his close friend Edith as his magistrate and had four children his wife Alicia - Argos, Alia, Adel and Alain. At some point, Adonis made contact with the Great Eye and was able to use it to bring his people to the World of Gamma, envisioning it as a paradise free of war and strife. Some time after however, Adonis's wife fell ill and perished, with his son Argos, also dying shortly after. This caused Adonis to become more withdrawn and made him even more determined in his desire to create a perfect world free of death. Under his direction, Edith created the Eyecons using the Great Eye, allowing for citizens of the Gamma to become immortal by sealing themselves in protective pods and using Eyecons to assume physical forms remotely. Edith would also create the Gammaizers to act as a conduit between them and the Great Eye, allowing Adonis to safely interface with it.

Sometime in the past, his follower Danton use to work for him and Edith on creating the earlier project of Demia and Gammaizers. However, Danton becomes deluded upon realizing the incoming danger of Demia and Gammaizers’ capacities through entire universe and creating an alternate to do humanoid-based experiment on remodeling their people and themselves, but Adonis rejected it, leading a civil war between them, and Danton is latter imprisoned for his crimes.

Invasion of the Human World

However, resources in the World of Gamma would eventually begin to become scarce, leading to Adonis's people slowly perishing one-by-one inside their pods. As Adonis held a meeting on what to do, Adel and Igor proposed they invade the Human World and use the souls of humans to keep the World of Gamma sustained. Adonis reluctantly agreed and sent his youngest son Alain to oversee the invasion.

As Alain and Chikara Saionji encountered difficulty in the form of Kamen Rider Ghost, Adonis sent Jabel to assist Alain in dealing with them.

When Alain returned from the human world, Adonis called him to his prayer chamber and asked him how it was, to which Alain commented on how he was taken aback by the sky being blue and not red like it was in their world. However, their conversation was secretly spied upon by Adel, who sensed doubt in his father's voice and plotted to dispose of him, viewing him as no longer worthy of bringing about their utopia.

Adonis was at one point called to a meeting by his friend and magistrate Edith, who asked Adonis to reaffirm his beliefs.

While uttering a prayer to the Gammaizers, Adonis was approached from behind by Adel and had his Eyecon body destroyed by him. Adel promptly framed Alain for their father's death and seized the throne. However, because only his Eyecon body had been destroyed, Adonis was able to survive in his normal body, though he was trapped within an invisible barrier by Adel.

Hoe was discovered by Alia, but Adonis warned her not to come any closer to the barrier as it may hurt her. He also warned her that the Gammaizers were becoming self aware and that they may try to manipulate Adel. This is because Adel thought his father never cared his family since the death of his beloved wife and Argos by illness, making Adel being a perfect candidate for the Gammaizers.

Adonis was later found and saved by Takeru Tenkuji, who had become allies with his son Alain. Alain and Takeru attempted to escort Adonis out, but a team of Gamma Commandos led by two Gamma Superiors showed up, having been ordered by Adel to kill Adonis. Adel's forces fired at Alain first but Adonis stood in the way, sacrificing himself to save his son. As he lay injured, Adonis told Alain he loves him and that he believes he will carry out his good will, only for Adel to appear and finish him off. 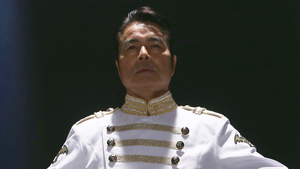 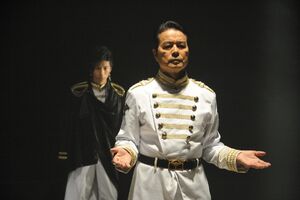 Adonis is approached by his son Adel. 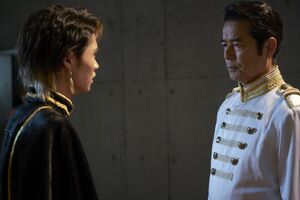 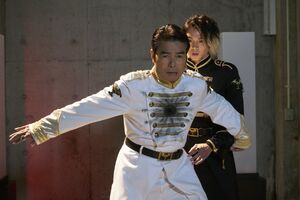 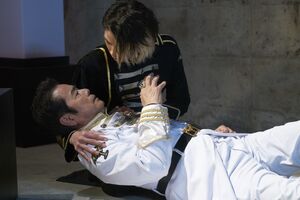