Be better than everyone else.

He was voiced by Greg Cipes, who also played Nega Beast Boy in the same series.

Adonis first fought the Teen Titans in an animal testing center. Even though he defeated the Titans one by one, Beast Boy stood tall and fights Adonis single-handedly, but Adonis gains the upper hand while mocking him, calling him a wuss and don’t know to fight like a man. Beast Boy, now enraged by his insult, violently fights back, leading them both to the chemical tanks, despite Robin’s warning. While battling, a chemical tank was punctured and drenched both Adonis and Beast Boy with its contents, and destroying Adonis’ armored suit. The chemical was a mutagen that it made Adonis and Beast Boy become more vicious and savage, from their behavior and then later physically by turning them into werewolf-like creatures. He then broke into the Titans Tower to attack Beast Boy. However, when Raven came across the scene, he attacked her too and kidnapped her in the process. Fortunately, Beast Boy, who unleashed his inner animal, managed to track them into the city's sewer system and saved Raven's life. However, when Robin, Starfire, and Cyborg found them, they assumed Beast Boy was the main culprit who attacked Raven and was framed for Adonis' crimes. While Robin angrily accuses Beast Boy for attacking Raven with forceful questions, threatening to put the latter in jail, Beast Boy unleashes his Were-beast form again, escaped while trying to look for Adonis to defeat him. Beast Boy later fought Adonis while they were both in their werewolf forms. When Beast Boy won, Cyborg cured the mutation from both of them and Adonis was sent to prison while Beast Boy's name was cleared and declared innocent.

At some point, Adonis returned to harass and mock body-builders at a beach but was easily defeated by Cyborg. Adonis then joined the Brotherhood of Evil. He participated in a race held by Ding Dong Daddy but was excluded when he was defeated by Red X.

When the Brotherhood executed its plans to eliminate superheroes from the world, Adonis was sent with Atlas to capture Pantha. Even though he and Atlas pinned her down, they were both defeated by Pantha. He was attacked at the Brotherhood's base by Mas, who kicked his foot. While hopping on one leg in pain, Herald blew his horn, which stripped him from his armor. He is later knocked out by a strong kick from Herald. It is not known if he was flash-frozen with the other villains at the end of the final battle.

Adonis' powers come from his suit, which grants him strong physical strength and endurance from physical attacks. Adonis' true body reveals to be a small weak boy. When he got drenched in chemicals by Beast Boy (who the latter also got drenched in chemicals who turned both of them into aggressive werewolf creatures), as a Werebeast creature, he still gains physical strength and endurance, even with claws. 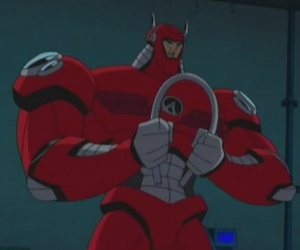 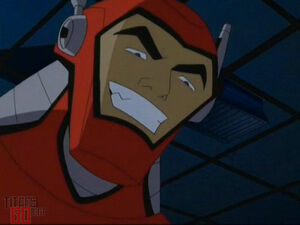 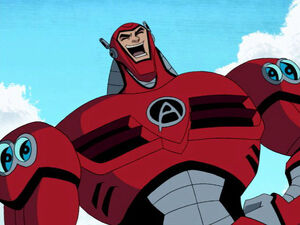 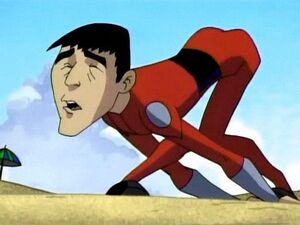 Adonis without his armor