Get Gideon to admit that he outsmarted him.

Trick Gideon into blowing everyone up (failed).

Adrian Bale is a serial bomber mentioned in the pilot episode of Criminal Minds, and is later a supporting antagonist in the third episode Won't Get Fooled Again.

He is portrayed by Tim Kelleher.

Adrian Bale came from a broken home and fitted all the criteria for becoming a serial bomber. As an adult, Bale began his criminal life, after building his own unique bombs. This would put him in the line of fire of the FBI, when criminal profiler Jason Gideon was assigned to his case.

After tracking him down, Bale held a hostage and threatened to blow him up. Gideon was able to talk Bale into surrendering and once Bale was in cuffs, gave the all clear. This proved to be a mistake, as Bale triggered the bomb anyway, killing six agents and the hostage. When referring to the incident later, Bale (using the page quote) said he couldn't help himself.

Bale's actions earnt him a life sentence in prison without the possibility of parole. During his sentence, he developed a cult following online whom he talked to over the internet and gave them tips on building bombs.

Bale and his lasting effects on Gideon are mentioned in this episode, but Bale himself is never shown.

A year after Adrian Bale was sentenced, one of his followers used his designs to cover up his crimes (forgery). After discovering that the bombs match Bale's design, Gideon goes to interview Bale in prison. Throughout their conversation, Bale offered no information. Instead, he took the opportunity to taunt Gideon over how the latter's lapse in judgement led to the deaths of seven people. He also dismissed Gideon's warning that he would make Bale's life much worse than it already was if was involved and did not help them.

Despite Adrian's lack of co-operation, Gideon understood him enough to know that if he wasn't involved before, he would want to be now. With a bit of help from Penelope Garcia, the BAU was able to hack Bale's accounts by sending him a keytracker virus through email. Through this, they discovered his fan club and eventually the copycat bomber David Walker, who did business with one of the victims. Unfortunately, Walker was able to escape before he could be arrested.

Like Bale before him, David locked a necklace bomb onto a hostage. He sent him to the local PD with a ransom demand, whilst he hid in a nearby building. A police sniper spotted him and agents Aaron Hotchner and Elle Greenaway went to confront him. However, before the arrest can be made, Gideon receives a call from Agent Morgan, who has just discovered an email Bale sent to Walker. In it, Bale expresses his regret at giving himself up only to face a life sentence. Hearing this, Gideon realizes that Walker intends to kill himself and try to take the agents with him. Seizing the radio, he orders everybody to get out. Thanks to this, everybody except Walker is able to make it out alive. Unfortunately, this leaves the FBI and PD in an awful predicament as the hostage is still wired up and his pay load will detonate in less than two and a half hours.

All seems lost ... until Jason Gideon realizes they have one last recourse: Adrian Bale! Bale is brought over from Georgia, where Gideon and Hotch try to negotiate a deal with him. Bale says that he will only co-operate on two conditions:-

Hotch is angered by these demands, but Jason agrees to them. He writes out his confession and personally reads it to Bale, much to Adrian's sadistic delight.

With that Bale instructs a bomb squad officer on how to safely disarm the device, under the knowledge that if he lies or refuses to help his deal is void. Following his instructions, the officer is able to isolate the two main wires, a red and a blue one. With less than a minute to go, it all comes down to simple choice: red or blue? Gideon asks which wire do they cut in order to disarm the device, to which Bale answers red. The FBI agent reminds the convicted felon about his deal and how if he lies he get nothing, but Bale repeatedly insists it is red wire. With the clock ticking all that remains is for Gideon to make the call and he does ... telling the officer to cut the blue wire!

The bomb squad officer does as instructed and the bomb is diffused. Bale is seized by the irate Hotchner and dragged away. As Walkers device is removed and the hostage released safely, Elle asks how Gideon figured out Bale was lying. Jason tells her that during their earlier interview, Bale had said that the emotional release from setting off a bomb is too overwhelming for him to pass up. Having learned from his mistake, he simply took Bale at his word.

Defeated, Adrian Bale is taken back to his maximum security cell in Georgia and is set to spend the rest of his life in prison. Gideon accompanies him. Before they part ways, Jason turns the tables on his former tormentor, telling the convict he's glad that he put Adrian away (comparing it to an emotional release). Gideon also reveals that he carried out his earlier threat to make Bale's life even more difficult. He told the other inmates that Adrian is an informant, meaning that Bale is now surrounded by men after his blood. As the cell door closes on him one final time, Adrian Bale can do nothing but watch as Jason Gideon walks away victorious, freed from the shadows of the past at long last. 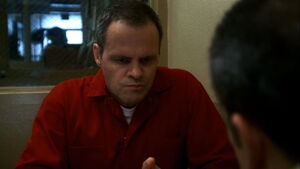