Experimenting and improving his suit to remain invisible.

Force Cecilia to have bear a child to hold as leverage to remain with him (succeeded).

Create a technologically advanced stealth suit to become invisible and stalk Cecilia (succeeded).
Destroy Cecilia's life to regain control and dominance over her to fulfill his obsession with her while covering his tracks and getting away with his malicious crimes (failed).

Adrian Griffin is the titular main antagonist of the 2020 science fiction horror film The Invisible Man, based on the novel written by the late H. G. Wells. He is one of the many incarnations of the eponymous Griffin, and one of the vilest.

Adrian is a wealthy optics engineer, and the abusive boyfriend of Cecilia Kass. Much of his past is unknown and it is speculated that he might’ve had issues with his brother Tom Griffin because of the fact that they talk poorly of each other behind their backs. Adrian met Cecilia at a party and they began a relationship together. Cecilia moves in to his house so that they could live together and in only time she started discovering his true colours. Cecilia became trapped in a violent, emotionally and physically abusive relationship with Adrian, who once told her that he would always be with her no matter where she went. Adrian also wanted to have a child with Cecilia, but she took birth control pills as having a child would keep her in Adrian's grasp. One night, Cecilia escapes from him with the help of her sister Emily and their friend James, who is a police officer. Before they manage to escape, Adrian angrily attacks a window of the car in his attempt to get Cassie back. Two weeks later, Adrian apparently commits suicide, and leaves Cecilia $5 million in his will.

It is revealed that Adrian is actually cheating death and has secretly created a uniform comprised of several small cameras that render him invisible. With the suit, he psychologically tortures Cecilia to the point of madness make her seem insane. He steals her work, causing an important job interview to end badly, and also drugs her into collapsing. Adrian then pretends to be her and sends an insulting email to Emily, causing a schism between them. When Sydney, James' daughter, tries to comfort the depressed Cecilia, Adrian slaps her, thus leading Sydney and James to believe that Cecilia did it thus pushing all of the people close to her away.

She returns to Adrian's home to investigate and discovers one of the invisibility suits. She invites her sister to dinner to discuss the discovery only for Adrian to slit Emily's throat before placing the knife in Cecilia's hand. She is implicated in the murder and is remanded to a mental institution, where she learns that she is pregnant. Adrian's brother Tom pays her a visit and tells her that he is alive, and that he will make the murder charges go away if she comes back to him. He also reveals that Adrian tampered with her birth control so she would get pregnant.

That night, Cecilia stages a suicide attempt by slitting her wrist with a pen, knowing Adrian will stop her. Once he grabs her hand, she stabs him with the pen, damaging his suit and causing it to glitch. Security guards arrive, but he incapacitates them before fleeing the hospital, with Cecilia in pursuit. Cecilia is able to escape the hospital, but not before Adrian tells her he plans to murder Sydney, spurring her to warn James. She goes over to James' house, where an invisible figure she believes to be Adrian is attacking Sydney, forcing Cecilia to shoot him dead.

When she removes the suit, however, she discovers that the figure is Tom, not Adrian. Police storm Adrian's house and find him alive, tied up and claiming that Tom held him prisoner. They conclude that Tom killed Emily, as well, but Cecilia realizes that Adrian set his brother up as the fall guy for his crimes. Cecilia returns to Adrian's house, where he has prepared a romantic dinner for two. To get Adrian's confession, she meets him at his house secretly wearing a wire tap while James listens in from a few blocks away. She agrees to mend their relationship, but only if he confesses to killing Emily.

Adrian insists that Tom was responsible, but claims that the experience changed his outlook on life and that he realizes that he mistreated her. When she starts crying, Adrian intentionally implies that he is the killer. Satisfied, Cecilia departs to use the restroom. Moments later, the security camera captures Adrian seemingly slitting his own throat. Cecilia returns and, apparently distraught, calls the police. Off the camera's sight, however, she taunts a dying Adrian, revealing that she had used the spare bodysuit to kill him. James later on states that Adrian committed suicide to get rid of him after what he did to him and his family.

Adrian is a classic example of a narcissistic sociopath and text-book abuser: he is completely self-centered, incapable of caring about the needs and well-being of others, and has no conscience or empathy.

He is also an obsessive person as he has developed an acute obsession over Cecilia throughout the course of their relationship and he sees her as his possession, and her leaving him wounds his fragile ego to the point that he resolves to destroy her if he cannot have her. He is also skilled at manipulating and controlling those weaker than him; even his brother Tom, who claims to despise him, is completely under his sway.

Adrian inflicts psychological and physical pain upon Cecilia, gaslighting and isolating her as well as hitting her. He turns Cecilia's friends and family against her, and even frames her for murder, all so she will have nothing and no one unless she submits to him. Even his desire to have a child is born from a desire to control her, as he believes that having his baby will bind her to him forever.

He is also quite sadistic, as he killed one guard after mockingly saying the word “bang” when holding him at gunpoint after disarming him.

Invisibility Suit: Instead of a chemical formula, this iteration of Invisible Man invented a combat suit that can turn its wearer invisible through his work in optics. 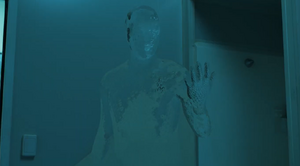 Adrian in his invisibility suit.

Adrian being found by police, staging a false imprisonment as his brother takes the blame. 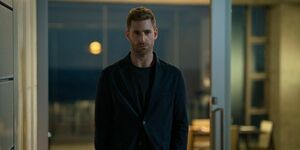 Adrian awaiting for Cecilia for dinner.

Adrian's death, as Cecilia slits his throat while wearing a spare invisibility suit.