She was portrayed by Haley King.

She dislikes Lorean and wants to knock her down at any chance possible. She also dislikes her own dad, a successful surgeon, whom she sees as rejecting her.

She will not let anything get in her way, and if it does, she will go after it. She does not exactly get along with anyone except for Phil Sanders, her boyfriend. 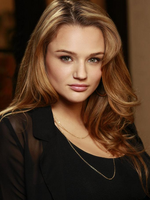 Add a photo to this gallery
Retrieved from "https://villains.fandom.com/wiki/Adriana_Masters?oldid=3828603"
Community content is available under CC-BY-SA unless otherwise noted.