Kill the people responsible for her son's death (succeeded)

Adriana Petrescu is the main antagonist of the 1993 Italian-American giallo/horror film Trauma. She's the mother of the main character, Aura Petrescu, and seemingly one of the latest victims in a series of decapitation murders, which Aura becomes entangled in. It's later revealed Petrescu is alive, having faked her death and been the serial killer all along, in revenge for the death of her newborn son and attempts to erase her memories of his murder.

She is portrayed by Piper Laurie, whose most notorious villainess role is Margaret White in Carrie.

Adriana Petrescu gave birth to her son Nicholas in a violent thunderstorm under the responsibility of Dr. Lloyd. Unfortunately, the storm was too violent for a steady, calm birth of the child, especially when Nicholas' umbilical cord was wrapped around his neck when he came out of the womb. Before Petrescu could fully birth Nicholas, Lloyd tried to cut the cord loose from his neck with a scalpel, but one clap of lightning startled him enough the scalpel slipped, leaving Nicholas decapitated alive, to the horror of Lloyd, the attending doctors and nurses, Adriana's husband Stefan, and especially Adriana, screaming "Murderers!" at them all. Dr. Linda Quirk pressured Lloyd into covering up the murder, with the coaxed go-ahead of Stefan, by wheeling Adriana into the ECT room, where she was administered shocks to erase her memories. This, however, failed, and along with the death of her first born, she was scarred for life, never forgiving the group responsible.

She soon gave birth to another child, a daughter she named Aura, who grew up to be a teenager but with severe bulimia nervosa. Adriana also made a living as a seer, contacting the dead of her clients. She started hallucinating the voice of Nicholas, whose head and headless corpse she kept in a curtain-shrouded crib shrine in his memory. Hearing the voice telling her to avenge Nicholas, she began a killing spree to evoke his death and get her own justice, having killed two of the guilty parties by the time the film started. She was always triggered to kill on the days it would rain, as it made her flashback to the thunderstorm her son died in.

She then scheduled an appointment at Georgina Jackson's private clinic the next day it rained. Not long after she says she recognizes Adriana, who's not shown in the POV camera angle, Adriana reiterates her consistent MO again on Jackson, striking the nape of her head with a claw hammer to paralyze her so she's conscious but unable to fight back. She then pulls out her "noose-o-matic" motorized garrote and slowly decapitates Jackson, leaving her corpse and taking her head. She's first seen when Aura's returned to her after yet again escaping the institution she's sent to for treating her bulimia. She tells Aura there's no other choice but to go back, and Stefan locks her in her bedroom to not "upset" Adriana or disrupt her séance in the evening. Adriana then "conjures" Jackson during the séance, which is later revealed to be a tape sneaked into the ritual, all part of her alibi. When a tree branch crashes through the window and the ritual's broken up, Aura escapes seeing her parents run around. When Stefan comes across a woman's headless body, he too is fatally garroted and decapitated. Aura's next to find the crime scene, as well as see the killer holding up Stefan's head and presumably Adriana's.

When Aura seeks shelter with news graphic illustrator David Parsons, who rescued Aura from a bridge in one of her mental breaks and treated her to lunch, the two slowly developing statutory feelings toward each other. A little boy named Arnie sees Adriana's activities in the house next to his, where she's hiding after having faked her death in the woods, the woman's body actually being that of a neighbor. He even breaks in to snoop around, finding her weapon and even killing by accident one of her geckos Adriana stole from Jackson. Before she catches him, he runs out. When Aura's returned to the hospital from Parson's colleague and then-girlfriend calling for her to be taken back, coincidentally on a rainy day, Adriana breaks in herself when Parsons does. She then kills Mark Leener and Hilda Vanderbilt, two nurses also there during her baby's death, in her usual fashion, a patient witnessing her murder Vanderbilt and waving to her. The other patients panic seeing their headless bodies, Parsons even being accused by a few, but he breaks out with Aura and they run.

Doing their own investigating, they discover the victims' connections in their last place of work from a storage unit picture and find another woman, Dr. Quirk. She's evasive and refuses to answer their questions, threatening them with the cops, but she admits to Alice, her domestic partner, she and the victims were all guilty of something horrible, before driving to a hotel, Aura and Parsons in pursuit. Despite it not raining, Adriana sneaks up and kills Alice off-screen, before going to the hotel, setting a fire to set off the sprinklers and emulate rain, and then murdering Quirk as well, whose head can't form words to tell Parsons crucial information despite the fact it's still moving after she's decapitated. The two escape, and Parsons finds the last victim, Dr. Lloyd, who simply denies culpability and screams at Parsons to go away. Adriana corners Lloyd and tries to garrote him too, but she only cuts the back of his neck because the wire catches on his gold chain. While paralyzed, he's instead placed in the elevator doorway, the elevator descending and snapping is head off, sending it falling down the shaft screaming. When Dr. Judd, Aura's disturbed psychologist, tries to kidnap Aura back to the hospital, believing she can unlock the identity of the killer in her mind, Parsons fights him off, and the cops come just as Judd drives off. His car crashes, and he says that he "loved" Aura before he died, but he's assumed to be the killer when the heads of all the dead people are found scattered at the scene having flown out of his car trunk. Aura then disappears, leaving a "suicide" note implying she drowned in the lake, Parsons devastated he couldn't find her.

Th next day,he then sees Aura's bracelet on someone walking by and follows them to Arnie's neighborhood. After some coaxing, Arnie tells Parsons where the person went, breaking into their house. He finds Adriana's shrine to Nicholas, with curtains with his name stitched into them and, to his horror, Nicholas' rotted corpse in a crib. Adriana comes up behind him and knocks him out with a fireplace poker, revealing herself alive and the killer all along, also having the worn the bracelet that drew Parsons' attention. Parsons is chained in the basement in a cage with a very much alive Aura, who's being held captive. Aura reveals how the neighbor was killed to look like Adriana, then Adriana pretended to hold up her head next to Stefan's to seem dead. Adriana, prepared to kill Parsons, reveals the tragedy of Nicholas' death and hearing voice wanting her to exact revenge. Arnie's already broken in, holding the "noose-o-matic" again, and by the time Adriana marches towards the two ready to strike, the weapon catches on her neck and Arnie starts the garrote, sawing through her neck until her head snaps off, screaming "Nicholas" while flying in the air and then rolling and falling over. The two are rescued, and the detectives assigned to the case close it, catching Adriana was always responsible for the murders. It's assumed Arnie's never charged for the justifiable homicide and also for being a child who knew little about Adriana and the weapon. 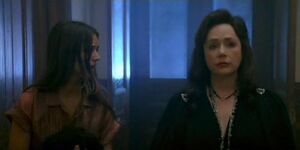 Adriana with Aura returning to the house. 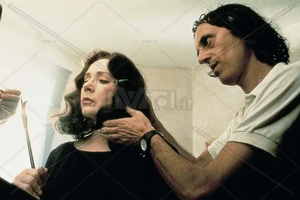 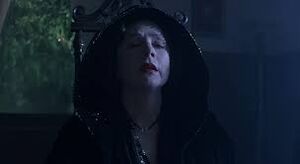 Adriana during her last séance. 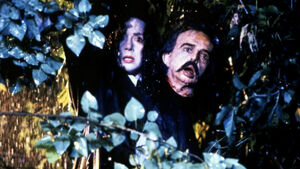 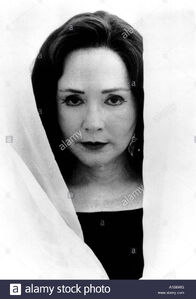 Adriana coming out from the curtains of Nicholas' shrine. 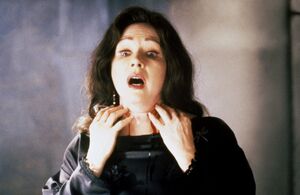 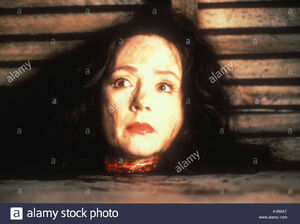