Scheming plans to overcome his rivalry against BoBoiBoy.
Bullying BoBoiBoy and his friends.
Hunting Power Spheres.
Plotting and scheming.
Abusing Probe (including throwing a cup of mug at him).
Taking out his anger on his comrades whenever they make a mistake or things don't get in his way.
Gloating about his plans and sometimes his victory.

Defeat or even humiliate BoBoiBoy and his friends (ongoing).
Retake Ochobot and convince him to give him powers (failed).
Conquer Earth (failed due to lack of proper resources).
Revive Probe with remains of P.E.T.A.I. (succeeded).
Aid BoBoiBoy and co. to save Ochobot (succeeded).
Get all power spheres so he can become the best power sphere hunter in the Galaxy (ongoing).

Adu Du is the main antagonist of the Malaysian animated series BoBoiBoy.

He was at first introduced as the main antagonist, but when other villains that pose more dangerous threats to both him and the protagonists debuted in the show, he winds up becoming an ally for them in spite of having odds on each other. This effectively made him an on & off neutral character of the series. Despite that, he's still one of the most recurring antagonists serving against the heroes throughout the series.

He was voiced by Anas Abdul Aziz (both Malay and English version), who also voiced Probe and Yoyo Oo.

Adu Du is a Kubulus from Ata ta Tiga, a planet which dying due to his race's extremely developed civilization which unfortunately, resulted their planet reduced into wasteland. Prior to his exodus for searching other planets' cocoa, he found Probe, Kubulus' war machine prototype that dumped due to glitches that made him clumsy. The exodus for other planet with similar cocoa from his homeworld also driven with his rivalry with Ejo Jo, with the latter banished him.

At one point in his past, he also uncovered Ochobot, whom is on the run from Tengkotak Troops. He wished to reactivate him but lack of power to do so.

Adu Du was born as a triplet, it was revealed by Probe that he built a laser lawnmower when he was 2 years old. He later on got banished by Ejo Jo from his homeworld when he was a scavenger. He came to planet Earth to attempt to steal cocoa in order to power the Power Sphere, which is Ochobot, but all of his plans was foiled by BoBoiBoy and his friends. He later uses his Mukalakus after Probe sold his spaceship to the weapon dealer, Bago Go. He later appeared in season 2 and teamed up with Fang in season 2, but also failed to defeat them even with the shrink ray and the emotion Y ray. When Ejo Jo came to Earth, he was forced to aid BoBoiBoy to get his friends' Power Bands back, because of Probe's death. Even though he was thought to be redeemed in season 3 after the revival of Probe, his mother convinced him to the bad side. He uses BoBoiBot to replace BoBoiBoy because due to the appearance of BoBoiBoy Fire, that the Rintis Island citizen was forced to join him, but he was defeated by BoBoiBoy once again. He became as the Super Evil Jero Jero along with Probe to aid the Shield Monster, which later revealed to be Ejo Jo's ally. Even with his evil personality, he still convinced BoBoiBoy to help him once again, but then he was later retreated after the appearance of Captain Kaizo.

He appeared in the movie as the villain as first, but after the arrival of the Tengkotak, he was forced by Papa Zola to find BoBoiBoy and his gang. But then he was kidnapped by Bora Ra after they intruded their spaceship, which he fell in love with Kiki Ta, but she denied his request, and later on the three were found by Gaga Naz. They managed to escape, but Yoyo Oo and Kiki Ta trapped them in their spaceship. They were rescued by the tamed J-Rex, and used the fake coordinates to Bora Ra before he got teleported away. They came out from the spaceship and took selfie with the gang and Papa Zola. Probe fixed Ochobot and the villains to back to the lair along with the weakened robotic squid.

Adu Du returned in BoBoiBoy Galaxy as the recurring antagonist and capturing Power Spheres, but he always get foiled by BoBoiBoy and his friends again.

It was revealed that he will be appear in the upcoming movie.

At first time, Adu Du is bratty and mischievous alien who willing to do anything to reach his goal even the fact he lack of resource. As story progress, Adu du slightly shown his good and care side especially toward Probe, his loyal battle robot. This is proved that he is crying toward Probe death due he sacrifice himself to save him, and willing to become BoBoiBoy allies to seek a revenge at Ejo Jo. Because of this, BoBoiBoy decide to help Adu du to revive Probe with remains of P.E.T.A.I robots and teaching him how to be a good people.After success revive Probe, Adu du become BoBoiBoy's gang allies, until his mother (Ibu bu) come to earth to see him, who doesn't like to see him become a good and wanted to him back become evil again.When BoBoiBoy accidentally hurt her, Adu du become angry with him and once again become their enemies. To eliminate and make BoBoiBoy suffer, he decide to built a robot version of BoBoiBoy which called " BoBoiBot" and convince to Rintis Island citizen that BoBoiBoy is to dangerous too be a superhero.

Beside he no longer to be his allies and continue to be BoBoiBoy rival, he still has mind to help BoBoiBoy's gang even with a little help. This is shown when he accept their request to bring them to react Captain Kaizo spaceship for save Fang and take their power band, and aiding them to saving Ochobot from Tengkotak. However in issue 17 of BoBoiBoy Galaxy season 2, it seems that Adu Du has a change of heart, but it will be officially confirmed soon until the next issues. 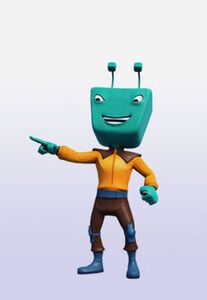 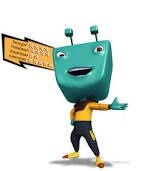 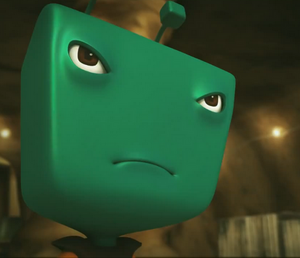 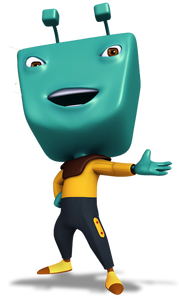