Villains Wiki
Register
Don't have an account?
Sign In
Advertisement
in: Mature, Game of Thrones Villains, Perverts,
and 15 more

Aegon of House Targaryen, the Second of His Name

King of the Andals, the Rhoynar, and the First Men

Lord of the Seven Kingdoms
Protector of the Realm
Prince (formerly)

Aegon II was born in 107 AC, the eldest child of Viserys I Targaryen and his second wife Alicent Hightower. Viserys had only one surviving child with his first marriage to Aemma Arryn, Rhaenyra Targaryen. However Viserys had become the heir to his grandfather Jaehaerys I due to a Great Council electing to pass over the female and female-line claimant, apparently showing that the Iron Throne could not pass to a woman. Viserys' brother Daemon Targaryen thus considered himself his brothers' heir. Angry at his brother Viserys had declared his daughter heir. However when Viserys remarried to Alicent Hightower, daughter of the Hand Ser Otto Hightower, and had sons he continued to proclaim his daughter heir, going against the laws of succession followed elsewhere in his lands (Dorne had not yet joined the realm). A feud developed between Alicent's family and Rhaenyra and her supporters, as Alicent wanted her son to inherit. They became known as the Blacks and the Greens, due to Rhaenyra wearing a black dress while Alicent wore a green dress during a ball.

When Rhaenyra was to be married, Alicent tried to have Aegon marry his half-sister but they were 10 years apart and had never gotten on, Viserys knowing Alicent wanted her son to be King. Rhaenyra married her second cousin Ser Laenor Velaryon, heir to Driftmark. She had three sons during her marriage. However it was widely believed they were fathered by Harwin Strong, as despite having two Valyrian parents they had brown hair and other features similar to Harwin, who was her champion. Laenor was rumored to be more interested in men then women also. The King had Rhaenyra's sons and his sons attend the same events, but dislike grew between them. Aegon believed them bastards, telling his younger brother Aemond Targaryen. In a fight between Aemond and their half-nephews where he called them Strongs, he lost one of his eyes.

Aegon bonded with the dragon Sunfyre the Golden, said to be the most magnificent dragon to ever fly the skies of Westeros. In 122 he married his sister Helaena, who was 2 years younger then him. They had twins, Jaehaerys and Jaehaera, and later another son, Maelor. Aegon also fathered bastards. After Laenor's murder Rhaenyra married her uncle Daemon Targaryen.

In 129 Viserys died in his sleep. Alicent called the Small Council, hiding the news of his death. She persuaded them to have Aegon crowned King. When Aegon was told the news he was with a whore. The Lord Commander of the Kingsguard Ser Criston Cole, known as "the Kingmaker", murdered the only member who supported Viserys' wishes, the 80-year old Master of Coin Lord Lyman Beesbury. Aegon was crowned King in the dragonpit by Ser Criston. As his personal sigil Aegon had the Targaryen dragon in gold instead of red, due to his dragon's colour.

This led to the Dance of the Dragons, a war between the supporters of Rhaenyra and Aegon, the Blacks and the Greens. When Rhaenyra's second son Lucerys Velaryon was killed over Shipbreaker Bay by Aemond, violence began. Daemon sent agents known as Blood and Cheese into the Red Keep, who murdered Aegon's six-year old heir Jaehaerys in front of his mother, Helaena, who began to sink into depression and madness. Aegon stripped his grandfather Otto of the Handship and gave it to Criston. His heir Maelor was sent from the city with a Kingsguard, with the intention he be kept safe in the Hightower. However at Bitterbridge he was torn apart by a mob.

At Rook's Rest a trap was set, which caught Rhaenyra's former mother-in-law Rhaenys Targaryen, wife of Lord Corlys Velaryon, one of Rhaenyra's main supporters. When she arrived on her dragon she was attacked by Aegon and Aemond on their dragons. She met their attack and with her dragon was killed. However Aegon was injured in the fall and left bent and twisted, with burns and broken arms, sleeping nine hours out of ten as he took milk of the poppy. His brother Aemond became the regent. They led an attack on Harrenhal which had been taken by Daemon but found it deserted.

Due to Aemond taking much of the Green army from King's Landing it was taken by Rhaenyra's dragons, many of the Goldcloaks supporting them due to Daemon being their former commander. Aegon disappeared during the fall of King's Landing. Larys Strong "the Clubfoot", Lord of Harrenhal and Master of Whisperers, helped him flee. They hid on Dragonstone, Larys correctly realizing Rhaenyra would not think to look for him on her fortress. Later he was joined by Sunfyre, who had partially recovered from the injuries he took at Rook's Rest.

Rhaenyra's tyranny towards King's Landing won her enmity, and her treatment of the Velaryons caused her to lose support. When Helaena threw herself from Maegor's Holdfast and died on the spikes below, many believed Rhaenyra was responsible. A riot began in King's Landing which blamed the dragons. The mob attacked the dragonpit, many dying but all four dragons in the pit were killed. Rhaenyra's dragon Syrax was also killed by the mob.

Meanwhile Aemond and Daemon died with their dragons in a duel over the God's Eye. Aegon's youngest sibling, Prince Daeron, died at Tumbleton when Addam Velaryon attacked the Greens on dragonback.

Rhaenyra fled to Dragonstone with her oldest surviving son Aegon "the Younger", her eldest son by Daemon, all three of her 'Velaryon' sons having died in the Dance. However Aegon and Larys had gathered support on Dragonstone. The sullen and sour Ser Alfred Broome, was angry that though he was the most senior Knight on Dragonstone the amiable Ser Robert Quince had been named Castellan instead of him, and joined them, slaying Robert personally with a spear. Aegon II descended on Dragonstone on Sunfyre, however was met by one of Daemon's daughters by his marriage to Laena Velaryon, Baela Targaryen, who was riding her dragon Moondancer. Though Moondancer was smaller, she was quicker, and Sunfyre was wounded from his battle at Rook's Rest. The dragons fought, and as they fell Aegon jumped 20 feet above the ground, breaking both his legs. Baela was injured, but was taken to a Maester.

When Rhaenyra arrived on Dragonstone she was met by an escort led by Alfred, who took her to the castle, then slew her guards. She and Aegon were taken before her half-brother. She denounced him and he fed her to his dragon Sunfyre, who burned her then ate her in six bites, leaving her foot "for the Stranger", on the 9th day of the 12th month, 130. As her loyalists would continue in Aegon the Younger's name, Aegon the Elder kept his nephew as a hostage. He made sure they married his only surviving child Jaehaera. Aegon agreed to marry the eldest daughter of Lord Borros Baratheon.

However "the Lads", young Riverlander nobles who supported the Blacks, moved along the Kingsroad, led by Lord Kermit Tully, Lord Benjicot Blackwood, and Benjicot's aunt Alysanne Blackwood, known as "Black Aly". An army under Borros Baratheon met them, but were defeated and Borros slain, leaving King's Landing with minor defences. Lord Cregan Stark of Winterfell led his army to reinforce them. Other armies were coming from the Vale, which was ruled by Rhaenyra's cousin Lady Jeyne Arryn, "the Maiden of the Vale". When the Black forces were a day's march from King's Landing, Corlys Velaryon advised Aegon to join the Night's Watch, but the King ordered his nephew's ear to be cut off and sent to the Lads, saying if his bloodline died so would Rhaenyra's. He then climbed into his litter and took wine. However when the curtains were pulled back he was found dead with blood on his lips. It is unknown who was responsible. This meant Aegon the Younger succeeded him as Aegon III.

Cregan arrested 22 men, wanting punishment for the death of Aegon. Even though he was opposed to them, he still believed Kingslaying should be punished. Cregan became Hand for a day, most of those accused took the Black. Ser Gyles Belgrave of the Kingsguard and Lord Larys Strong chose death, while Lord Corlys Velaryon was freed due to his granddaughters Baela and Rhaena Targaryen.

Two years later Jaehaera Targaryen, like her mother, died by falling from Maegor's Holdfast onto the spikes. Though it was termed suicide, many suspected the Hand Lord Unwin Peake was responsible, intending for Aegon to marry his daughter, though Aegon III eventually married Daenaera Velaryon. With Jaehaera's death, the line of Viserys I and Alicent Hightower ended (though Aemond had impregnated Alys Rivers it is unknown what became of the child).

History does not remember Aegon II well, even though he made sure to clarify for the historians that Rhaenyra (who is also not thought of fondly) was never the queen and, by the end of the Dance of the Dragons, a madwoman feared and hated by her own allies. Though officially Rhaenyra is termed a usurper despite all Targaryens born after being descended from her, everyone remembers Aegon II as the true usurper, who plunged Westeros into chaos for a throne he had no right to. 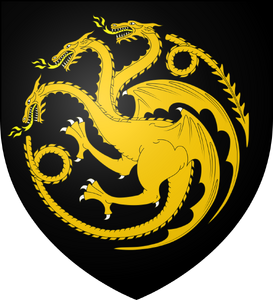 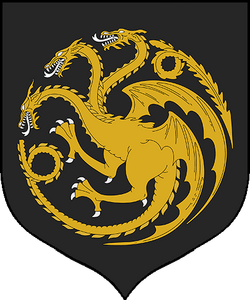 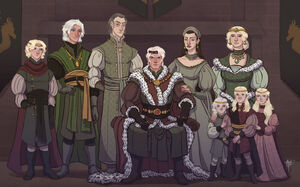 Aegon II with his family and chief supporters, the Greens. 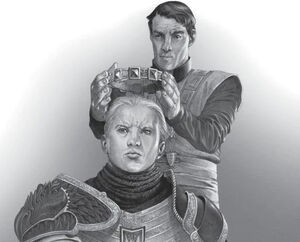 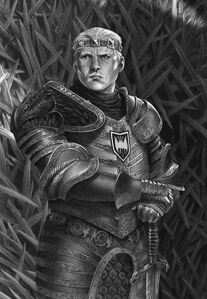 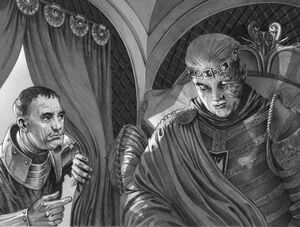