Aeolus is an antagonist that appears in Mega Man ZX: Advent. He is one of the chosen ones selected to be the next Mega Man and is a bio match for Biometal Model H.

Aeolus is described as a perfectionist and has an air of superiority. He also displays trait of misanthropy, deeming the human race ignorant to the point that they deserve to be eradicated (believing that they are the root of all conflicts). Although he not above working with other and seems to tolerate the other Mega Men Atlas, Siarnaq, and Thetis in order to impede Grey/Ashe's progress.

In spite of this way of thinking, Aeolus appears to be somewhat touched by individuals sacrificing themselves for another, as evidenced by his response to Biometal Model Z staying behind to face the four Mega Men, in order for Vent/Aile to rescue Ashe/Grey.

Aeolus first appeared accompanied by Siarnaq when Grey/Ashe defeated Rospark and witnesses a Raider's soul being absorbed into Model W. As Grey/Ashe prepare to do battle, Aeolus and Siarnaq had more pressing issues to attend to, while taunting the rookie Mega Man before leaving with the Model W. Aeolus meets the protagonist again at the Floating Ruins, where he engages them in battle for the Model W that is disturbing the area's gravity, but ultimately lost and vows to achieve his goals before making off with the Model W.

Aeolus is seen next to the Chosen Ones in Model A's ciphers. He appears again alongside Atlas, Siarnaq, and Thetis in the Ouroborus to block Grey/Ashe's path to Albert. He perfectly convinced that he can defeat all of his opponents and ultimately become the king of Mega Men. However Aile/Vent soon arrive to distract them while Grey/Ashe escape and the 5 begin to battle.

In the following event when Ouroborus starts to crumble after the defeat of Master Albert, Model Z chose to remain behind and face the four alone, while Vent/Aile went to the aide of Ashe/Grey, whom had fainted after the battle. Using his knowledge of Biometals, Model Z somehow managed to disable their movements. The outcome of their battle remains as of yet unknown. If the player beats the game on Expert mode, a hidden ending scene shows Aeolus and the other three alive and well in there megamerged states, though it is unclear whether or not they're copies of the originals.

Aeolus is an aerial combatant with Thunder-elemental attacks.

With his charge attack, he is able to generate two plasma cyclones that can shoot in certain directions depending on the protagonist the player chooses: If playing as Grey, the cyclones will shoot in a V-pattern of if playing as Ashe, one cyclone will fire from Aeolus from the front on a horizontal path and another will fire behind him.

His weapon of choice is dual laser swords that he uses for close-range combat (in conjunction with his aerial abilities). However, Aelous can emit a sonic boom after his 3rd slash attack; from the 3-slash combo. In Expert mode, he can emit two sonic booms that can travel across the screen faster. 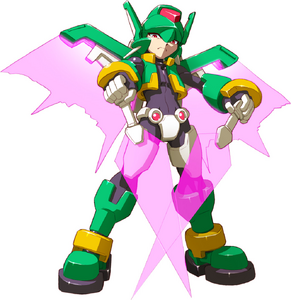