Resident of the Island of No-Name

Keep Happy to himself to stop time.

Aeon the Terrible (though his name is sometimes spelled Eon) is a giant talking vulture and the sole antagonist in the 1978 Christmas special Rudolph's Shiny New Year. He could live for one eon and when it was up, he would turn into ice and snow. He lives on the Island of No-Name: a giant iceberg near the north pole, where the sun never shines. He spent ages terrorizing those who lived in the Sands of Time: a desert near Father Time's castle.

He was voiced by the late Paul Frees, who also played Burgermeister Meisterburger and Grimsby in Santa Claus is Comin' to Town, Kubla Kraus in Jack Frost, Jack Frost in Frosty's Winter Wonderland and Rudolph and Frosty's Christmas in July, and Winterbolt in the Rudolph specials, Quizzler in Mouse on the Mayflower, and Boris Badenov in the Rocky and Bullwinkle series.

In the special, Happy, the baby new year ran away after being laughed at for his big ears. When Aeon learned of this, he knew that if the baby is not brought back to Father Time before midnight of the new year, then time would stop and Aeon would not die. He searched drastically for the baby. Father Time asked Rudolph, the Red-Nosed Reindeer, to search for Happy and Rudolph proudly accepted. Father Time told Rudolph that Happy would be hiding on a series of islands called the Archipalego of Last Years. Aeon found Rudolph sailing towards the islands and tried to stop him but was stopped by Big Ben, the clockwork whale. For two days, neither Aeon nor Rudolph were able to find him, but when they arrived to the island of the year 1023, Aeon found him first and flew off. Rudolph and Big Ben chased after Aeon and squirted water at him, which made him drop Happy.  Happy then landed on the island of 1776 and finding him again, Aeon let out a loud shreik and flew off. He promised Happy that he would take care of him and to be his friend and brought him to the Island of No-Name, shortly before midnight of New Year's Eve.

Rudolph and his friends found the island and attempted to rescue Happy but they had only 30 minutes to do so. They tried to climb up the iceberg but with no avail. Aeon spotted them and let out a horrible shriek, which caused an avalanche and encased Rudolph and the others in snowballs. Rudolph managed to melt the snow with his nose and found Happy in Aeon's nest while the vulture was sleeping. Rudolph convinced Happy that having big ears was a good thing and Happy's reaction woke Aeon up. Happy then showed his ears and Aeon began to laugh. He laughed so hard that he fell out of his nest and freed Rudolph's friends from their snowballs. Aeon realized that he could not turn into ice and snow if he's warmed up inside with laughter. When Santa arrived to bring everyone back to Father Time, Aeon waved goodbye and continued laughing. It is unknown what has happened to him afterwards.

Aeon is a merciless, vicious, ferocious, bloodthirsty and bellicose vulture who is stated to live for approximately one eon; at his death, he will supposedly turn into ice and snow. It appears that his time is up on December 31 of the year that the special takes place, so he goes looking for Happy, the Baby New Year, to make time freeze and himself immortal. When he eventually sees Happy's oversized ears, Aeon is very humorous, comical and hysterical, so he laughs extremely hard that it is impossible for him to turn into ice and snow, being warmed with laughter, so he consequently gets the result that he wants. 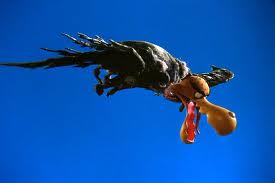 Aeon attacking Rudolph from above.