Villains Wiki
Register
Don't have an account?
Sign In
Advertisement
in: Mature, Monarchs, Game of Thrones Villains,
and 26 more

Kill Ser Duncan the Tall for beating him (failed).

Prince Aerion Targaryen, better known as Aerion Brightflame or Aerion the Monstrous, is a character from the A Song of Ice and Fire universe, appearing in "The Hedge Knight", first of the "Dunk & Egg" novellas by George R.R. Martin, as its main antagonist.

Aerion Targaryen was born the second son of Prince Maekar Targaryen. Aerion was always an exceptionally cruel boy, and was loathed by his youngest brother Aegon, who was often the victim of Aerion's torments. Aerion once threw Aegon's pet cat down a well, and would visit him in the middle of the night and hold a knife to his privates, jesting that he would remove his privates and turn him into a sister for Aerion to marry. Aerion hid his true nature from his father, around whom he was all smiles and courtesies.

Aerion participated in the Ashford Tournament, arriving with three members of the Kingsguard. He first encountered Ser Duncan the Tall in the stables, where he mistook him for a stable boy.

He challenges Ser Humfrey Hardyng in the tournament, and intentionally lowers his lance in order to pierce Hardyng's horse, gravely injuring Hardyng's leg and leaving the horse to die in agony.

Aerion and his knights later attacked a Dornish puppeteer named Tanselle for showing the death of a dragon in their show. Aerion took this as an insult, and personally broke one of her fingers and told her that the dragons should never lose. Aerion's brother Aegon, now in service to Ser Duncan as his squire allerted Duncan of what was happening, and Duncan rushed to the defense of Tanselle, on whom he had a crush. He knocked Aerion to the ground and kicked him in the face, loosening his tooth. Dunk was imprisoned for striking Aerion.

Dunk was later informed by Aerion's uncle, Crown Prince Baelor Targaryen, that Aerion was after his blood, and that the only way to save himself was through trial by combat. Aerion learned of this plot and invoked a trial by seven, passing it off as a way to also allow his brother Daeron (who had made matters worse by lying about Dunk to cover up his failure to watch their brother) vengeance, when in fact he simply didn't want to fight a man of Dunk's stature by himself.

Dunk managed to find seven champions, among them Baelor Targaryen himself, and the trial began. Aerion and Dunk clashed during the battle, and Aerion knocked him from his horse. He gave him a chance to yield, but Dunk refused, and used his superior size and strength to wrestle Aerion into the ground and pummel him. A terrified Aerion yielded, and the trial was ended. Sadly, Baelor was accidentally killed by a blow from his brother Maekar.

After the trial, Aerion's father exiled Aerion to Lys, hoping that a few years in the Free Cities would be good for his son. This proved not to be the case. Aerion rode with the Second Sons for a while, and possibly fathered some bastards in Lys.

Aerion's vanity and insanity culminated when, while drunk, he drank a cup of Wildfire in the belief that he would become dragon. The Wildfire burned him from the inside out, killing him. In a twist of irony, this showed everyone around him how weak he was, as Targaryens who were strong of mind were immune to any form of heat, proving to all that he was no dragon.

Aerion was renowned for his monstrous cruelty and insanity. He was slim and of average height, with curly silver hair, a statuesque face with sharp cheekbones, a straight chin and pale skin, and violet eyes. 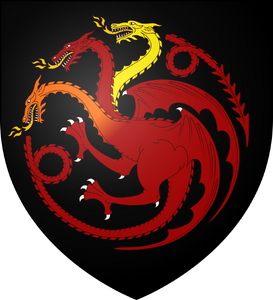 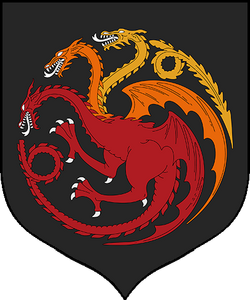 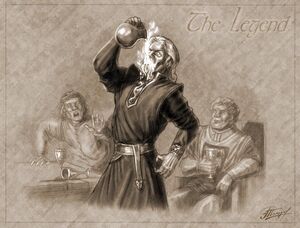