Afina was a one-shot villainess in "Awakening", a Season 3 episode of the television series Sanctuary.

She was portrayed by Aliyah O'Brien.

Afina was an ancient vampire queen who was frozen for many centuries in a tomb in East Africa. Afina was discovered by Helen Magnus and Nikola Tesla, and Magnus freed her in order to save Tesla. After being freed, Afina was cordial to both Magnus and Tesla, but she would later reveal her true colors and betrayed them. Afina resurrected her plans to take over the world and she planned to use Magnus as a blood source. Magnus decided to give Afina the key to Hollow Earth, but only if she spared the surface. Afina agrees to the deal, and Magnus gave her the map and the password. However, Afina was unaware that the map was booby trapped against vampires, and as a result, the compound exploded, assumingly killing Afina.

The episode takes quite a few liberties in terms of Afina's failure to carry out her plan. As she begins the process of awakening her vampire army she is interrupted by Magnus and stabbed with a metal rod, which does virtually nothing to her due to her instantaneous powers of regeneration, Tesla attacks her, and is promptly defeated. His goal in assaulting Afina is to give Magnus enough time to shut down the machine and prevent the vampire army awakening, but after defeating Tesla we see Afina standing not two feet from Magnus as she works to stop the machine. Yet for some reason, after standing and gloating, Afina decides not to stop her, and continues her attack on Tesla. From a writing standpoint this scene makes no sense as one blow from Afina would have destroyed Magnus or at the very least stopped her tampering with the machine, while Tesla lay on the ground 50 feet away and helpless.

Afina's second inexplicable mistake is not only trusting the pair with the gateway key to Hollow Earth, but giving up the secret to escaping her lair before they even give it to her. After they give her the key there is nothing whatsoever to stop her from capturing or killing Magnus, and eliminating Tesla, as the pair are helpless against her and have lost their leverage, yet she lets them go seemingly out of the kindness of her heart, or a sense of honor, despite having just betrayed them minutes earlier, and being quite clearly an evil character bent on the subjugation of humanity.

Her third head scratching decision is to activate the key, thus enabling her to travel to Hollow Earth, before waking her army. It would have made much more narrative sense for her to wait on the key and resurrect her vampire court first, but for some reason she seems to forget that was ever her intention and prepares to charge into Hollow Earth by herself.

Lastly, it is shown that Afina has super speed that is in fact so fast it might be confused with teleportation. When the key rune changes to a symbol for detonation Afina could easily have used her speed to teleport to the bottom of her vampire trap, a deep shaft in the ground that would probably have protected her from the blast, or at least mitigated the damage enough for her to survive, given how quickly she heals- the wound in her chest literally closes the instant she removes it from her body. We also know the blast must be small and localized because Tesla and Magnus are quite unconcerned, alternately walking and slow jogging out of the area.

At the end of the day Afina suffers from too many classic sexy vampire tropes, eliminating all suspension of disbelief. She is extremely arrogant and beautiful, and certainly evil, yet forgets her own plan and fails to punish Magnus in any way for trying to kill her, in addition to being extremely naive and too stupid to have plausibly survived as long as she has. Aliyah O'Brien does a fantastic job given what she has to work with, and though it would be entertaining to see Afina's return, that event is doubtful given the silly ignorance she displayed in this episode. 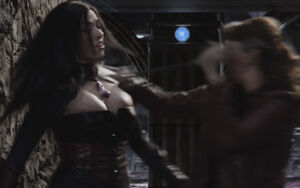 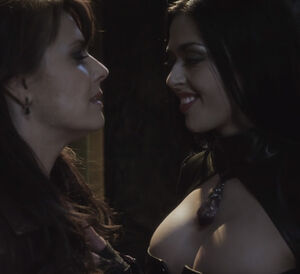 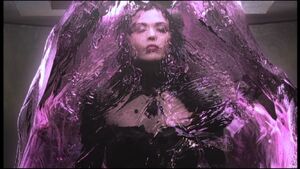 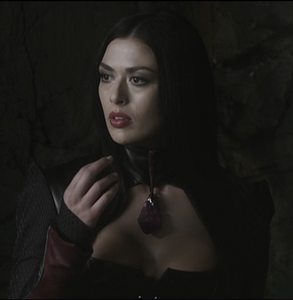 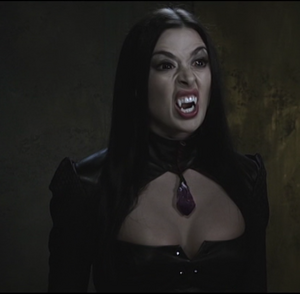 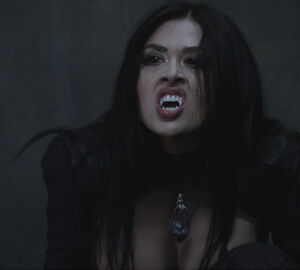 Add a photo to this gallery
Retrieved from "https://villains.fandom.com/wiki/Afina?oldid=3469710"
Community content is available under CC-BY-SA unless otherwise noted.