Free Elizabeth from Funtime Baby's Entertainment and Rental (for Michael; succeeded)
Bully the younger son (for the older son; succeeded).

The Afton Family is the main antagonistic faction in the Five Nights at Freddy's franchise. They are the friends-turned-enemies of the Emily Family.

Comprised of infamous serial killer William Afton and his three children (with the family's matriarch being entirely absent from the series as of current knowledge), the Aftons are a highly dysfunctional family responsible for spreading much suffering both to other people and among themselves through abuse, neglect and even murder.

William Afton and his unnamed wife met at one point in time, got married, and eventually had around three children, those being Michael Afton, Elizabeth Afton, Big Brother, and the Crying Child (the latter two are both theorized to be Michael). At one point, Mrs. Afton would either die or divorce William, given that she never appears in the series. William himself would be a neglectful and likely abusive father.

In 1983, William killed Charlotte Emily, the daughter of his business partner Henry, presumably outside of the original Freddy Fazbear's Pizza. Before or after this event happened, the first death in the Afton family occurred: it was none other than the unnamed younger son. During the day of his birthday, at Fredbear's Family Diner, the elder son and his friends put him into the mouth of Fredbear as a prank. However, the animatronic crushed the child's head, killing him. While in the hospital, Michael apologizes for killing him, and the mysterious Fredbear plushie makes a promise to "put him back together".

In what is heavily implied to be 1985, on the night of June 26th, William would go on to kill five more children in what would later be known as the "Missing Children Incident", leading to the closure of the pizzeria. The kids would go on to possess Freddy Fazbear, Bonnie the Rabbit, Chica the Chicken, Foxy the Pirate Fox, and the elusive Golden Freddy, thanks to the help of Charlotte, who now possesses a Puppet-like security animatronic.

NOTE: This part doesn't have a confirmed placement in the timeline.

Sometime after the original Freddy's Fazbear's Pizza location closed down, William built Circus Baby's Pizza World, now with robots being made to kidnap and kill children. However, the second death in the family occurred when Elizabeth got too close to one of the robots, Circus Baby. which resulted in her getting pulled into the robot's stomach, crushing her to death. William cancels the grand opening of the location and covers the incident up by saying it was due to gas leaks.

At an unknown time period, Willliam sends his son, Michael Afton, to Circus Baby Entertainment & Rental, an underground location he made after his daughter was killed. Michael goes there, and Circus Baby, now possessed by Elizabeth, helps him. On the fifth day, every robot in the location transforms into Ennard. Baby, now controlling the amalgamation of machines, reveals that she desperately wants to escape with her friends, and scoops Mike using the Scooper, killing him. With the giant hole in Mike's body, Ennard replaces his insides with itself, escaping the location. After a week, they were forced to escape Mike's body and go into the sewers because Michael's body was rotting. Michael survives because of the Remnant injected into him from the Scooper. He swears to find his father.

NOTE: From this point, everything is confirmed to take place in the order it's mentioned in.

In 1987, a new Freddy Fazbear's Pizza is opened. William murders another set of innocent children, who presumably possess the new Toy models, and leaves; It's also theorized he was the night guard, using a different name. Shortly afterwards, a night guard named Jeremy Fitzgerald applies for the night guard position in the location, who after the first week on the job, gets moved over to dayshift, allowing a third night guard, Fritz Smith, to take his place. Unfortunately, the Bite of '87 occurs, resulting in the pizzeria being closed down yet again.

The third Freddy Fazbear's Pizza is set to close in 1993 after being open for five years from the year 1988. Michael applies for the night guard job under the alias of "Mike Schmidt", in which he claims to be for free pizza, although its implied he has ulterior motives. However, after his first week of working, he's fired due to his general unprofessionalism, bad odor, and his tampering with the robots. The restaurant later closes down in the same year.

At some point after the pizzeria's closure, William goes to the abandoned location and destroys the four main animatronics with the presumed assistance of Shadow Freddy. After succeeding, the souls inside go after their killer. Afton, in a blind panic, goes to the Safe Room and eventually hides into the Spring Bonnie suit, now withered. Due to the conditions of the suit, the spring locks malfunction and kill William, tearing him apart and killing him slowly.

Thirty years later, William, now known as Springtrap, is revealed to have survived and been taken to Fazbear's Fright, a horror attraction that serves as a homage to the original Freddy Fazbear's Pizzeria. There, he roams the attraction, attempts to kill the place's night guard for the week, and escapes after it's set on fire. He eventually goes through unknown changes and becomes Scraptrap.

He is then lured into another Freddy Fazbear's Pizza. A day after he was salvaged by his own son, Michael, he reunites with his daughter, now Scrap Baby, who became this way after she was ejected out of Ennard for being a bad boss. Days later, as Scrap Baby is about to kill Michael, Henry interrupts her. Henry explains that the entire location is a trap, and sets the pizzeria on fire. Michael and Elizabeth are presumably killed in the fire, while William is kept alive by Golden Freddy and tortured in his nightmares.

Years later, Fazbear Entertainment develops a VR game that cleans the dirt off their reputation. They use circuit boards to speed up the process. However, they end up scanning one of William's burnt circuit boards, which allows him to escape Golden Freddy's torment and become a digital virus known as Glitchtrap. For his time trapped in the game, he drives a man named Jeremy to insanity and presumably suicide and recreates his first five murders in-game. He eventually escapes his virtual prison through possessing a woman named Vanessa, and forces her to commit his evil deeds until her purpose for him is fulfilled.

Later, the Fazbear Funtime Service is released. Glitchtrap infects the system and makes every robot hostile, as well as being the one responsible for adding Springtrap. Behind the scenes, Vanessa is being driven to madness by Glitchtrap. She soon makes a rabbit costume and uses it to do her captor's dirty work at the new Freddy Fazbear's Mega PizzaPlex.

Vanessa, now under the pseudonym of "Vanny", retrieves William's body and rebuilds Springtrap through unknown means. Glitchtrap promptly possesses his own body once more, resting in a recharge station until he is fully rebuilt. Meanwhile, an abomination rests close to the recharge station, although it's unknown what it is, what it's doing there, or what its motives are. It is up to the player what Vanny and William's fates are due to the multi-ending nature of Security Breach. However, the Afton ending (which is said to be the canon ending through the files) shows how Gregory foils Afton's plans after he tried to hack into Glamrock Freddy's system. Afton is repeatedly burnt by Gregory, which causes the building to collapse in on itself. Gregory and Freddy are able to escape the building, but the abomination is able to pull Afton inside, leaving it and Afton's fate unknown. 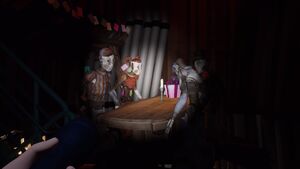