The Legend of Zelda: A Link to the Past

Advisor to the King of Hyrule

Making people disappear before their loved ones.

Break the seal of the Seven Sages (succeeded).

Resurrect Ganon from the Dark World and assist him in conquering Hyrule (failed).

Agahnim is a dark wizard and the central antagonist of The Legend of Zelda: A Link to the Past. Although he is believed to be a servant of Ganon, the prince of darkness, in reality, he is actually Ganon's alter ego, created to break the seal on the Dark World by sending descendants of the seven sages from the Light World into the Dark World.

This biography of Ganon's alter-ego Agahnim is organized into the latest "official Zelda timeline", this may change completely in the future as the timeline given is merely meant as an example, and there have been official timelines before it.

This is the timeline where Ganondorf killed Link in his final battle with him, leading to the Imprisoning War described in A Link to the Past's backstory.

Pre-A Link to the Past

While trapped in the Dark World, Ganon created a copy of himself with several of his abilities - the Ganondorf copy was then sent to Hyrule under the alias of "Agahnim". The land of Hyrule became besieged by an onslaught of terrible misfortunes, like pestilence and drought, the King of Hyrule offered a reward to a person who could put an end to these problems.

Agahnim arrived and put an end to the troubles with a previously unknown magic. He was declared a hero and was given the positions of Chief Advisor to the King, Priest, and Heir to the Seven Sages.

Agahnim used this position and his mysterious magic to brainwash all of Hyrule's soldiers, make the King of Hyrule disappear, and capture six of the descendants of the Seven Sages to make them disappear to the Dark World.

After Link rescued her, Zelda hides in the Sanctuary. She was the last of the descendants, so Agahnim would probably come after her as well. Eventually, Agahnim's troops find her and take her to the top of the highest tower of Hyrule Castle.

Agahnim then sends Princess Zelda to the Dark World, this breaking the seal of the Seven Sages. He tells Link that nothing can stop him now, because the Tribe of Evil can now use the Triforce, and that evil and darkness will soon overrun the Light World. He then vanishes, but Link manages to find him in a hidden chamber where he duels with the Dark Wizard. Before Link can defeat the wizard, he flees into the Dark World. During Link's quest to rescue the seven maidens, Link learns that Agahnim is a servant of Ganon.

While in the Dark World, Agahnim returns to Ganon and he possesses Agahnim's body - deciding to put his copy to use it to defeat Link instead of just getting rid of it. When Link defeats Agahnim a second time, at the top of Ganon's Tower in the Dark World, Agahnim collapses, and from his body, Ganon appears. Ganon turns into a bat and flies to the Pyramid of Power. At the start of the final battle, Ganon reveals that Agahnim was, in fact, his alter ego - a copy of him.

Though Ganon was destroyed, he was somehow able to recreate Agahnim before the destruction. Agahnim (now going by the name of Agunima) went to Holdrum with Onox in order to assist him in reviving his true self. He guarded the Dancing Dragon Dungeon but was defeated by Link, despite this Ganon was still revived later in the game.

Agahnim is never created by Ganon in these timelines, instead, a copy of Ganondorf named Phantom Ganon appears.

Agahnim appears as a primary shield type spirit with the ability to increase magic attacks. His spirit battle is against two male Robins on the Omega form of the Temple with increased magic power, favoring special moves, but are weak to reflected projectiles.

Link cannot hurt Agahnim directly, not even with Master Sword. Link must use his own magic attacks against him. When attacking, Agahnim hurls magic attacks at Link. The first one is a magic ball, which can be hit with Master Sword to reflect it and make it wound Agahnim. the second attack can also be hit with Master Sword, but it splits up in multiple fireballs flying through the room. The third attack is a lightning attack which Link can only avoid by standing at Agahnim's side. The lightning strike cannot be reflected. If Link strikes at Agahnim directly, he receives an electrical shock.

While he fights alone in Hyrule Castle, in Ganon's Tower, he creates clones of himself to confuse Link. This can actually work to Link's advantage, as the clones create magic balls that can be bounced back. 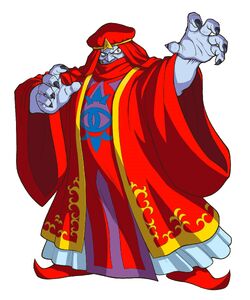 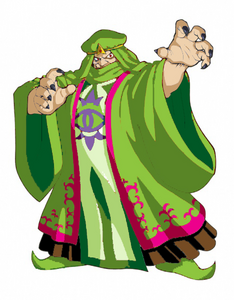 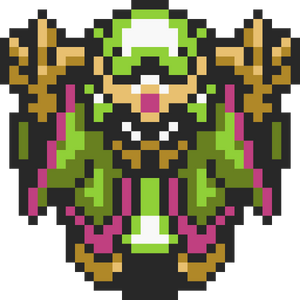 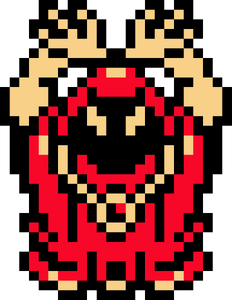 Agunima
Add a photo to this gallery

Retrieved from "https://villains.fandom.com/wiki/Agahnim?oldid=3677124"
Community content is available under CC-BY-SA unless otherwise noted.