To be a better agent than 83 (failed)

Agent 84 (also known as Heather) is the secondary antagonist of the 2015 film Barely Lethal. She is rivals with fellow Prescott Agent 83.

She was portrayed by Sophie Turner.

She has long red hair, blue eyes, and wears a black skintight suit as her uniform while a Prescott Agent. In her civilian form, at the house party, she wore an all black look that consisted of a leather jacket, a crop top with a belly button piercing, a short skirt, and leather boots. At prom, she wore a dark blue-green dress with high heels, which were also used as a weapon.

Agent 84 has been an agent with the Prescott Academy for as long as her rival Agent 83 has been (since they were little girls). She was always jealous and disgusted of 83, claiming her to be more superior than she is. As a result, she later decides to show off in front of her (in her civilian identity) and make her feel the same way.

Agent 84 is first shown poking eyes on a teddy bear with a pencil, as instructed by Prescott head Hardman. She giggles at 83 when she finds out she has an attachment to teddy bears. Later they train in physical combat while the film slowly progresses to their teenage years where 83 knocks down 84, and when she offers to help her up, shoves her arm out of the way and gets up on her own.

Later, Hardman assigns the case to Agent 83 to apprehend the sexy, beautiful but seemingly dangerous arms dealer Victoria Knox, which frustrates 84, claiming she wanted that case while also spilling secrets that 83 likes the new perfume by Ke$ha. 83 successfully apprehends Knox but disappears into the lake below. Hardman tells 84 to take care of her right away. At this point, however, Knox either bribed or manipulated 84 to join her side and help her escape from the academy.

In the interrogation room, 84 joins Hardman before he is even able to question Knox about her motives and Knox gives a signal to 84 when Hardman is not looking, meaning they are aware of their plan. Knox escapes and 84 later blends in with the teens down in a place called Massachusetts. Going by the name "Heather", she decides to use her new identity to take advantage of 83 (now Megan Walsh) for revenge, and even befriends two of the girls who showed a complete dislike for her at a party. She dresses very sexy in her new look simply to get on her nerves and even tries to steal her love interest Cash.

Heather tries to get to him but Megan beats her to it and asks him out to the dance. She instead asks Roger out to the dance. Later, driving a black car with tinted windows, Heather catches up with Megan, who was also with Liz Larson, and attempts to assassinate her inside the car. Megan takes the wheel and tries to lose the car to no avail. The chase takes it all the way to the junkyard, where both cars crash, but with Heather able to escape before Megan can catch her. She finds out the driver is Heather from the scent of her Ke$ha perfume, and figures out she is a double agent.

Later at the Homecoming dance, Heather is dancing with Roger and it seemingly all goes well until Megan shows up and tries to win him back since her other date, Cash, was boring to her. This infuriates Heather and she fights Megan in the gymnasium. Realizing the number of innocent people inside, Megan takes the fight into the school hallway where Heather reveals her true colors and jealousy towards her.

Of course now with the secret out, Heather wants to kill Megan.

Despite her defeat and Knox's arrest, while looking at a tablet in a limousine, she decides to hunt down Megan and find out where she is going to college and tells her associate this. 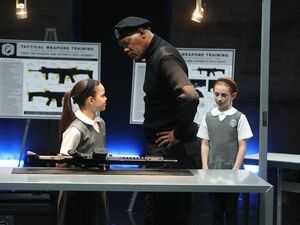 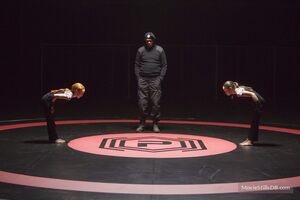 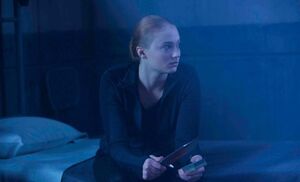 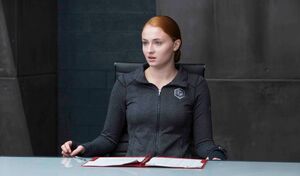 84 at the boardroom meeting. 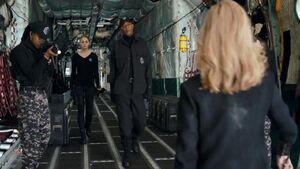 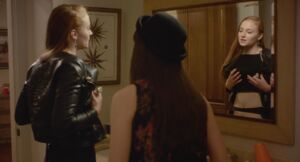 Heather (84) annoys Megan (83) by showing off her beautiful body at a party. 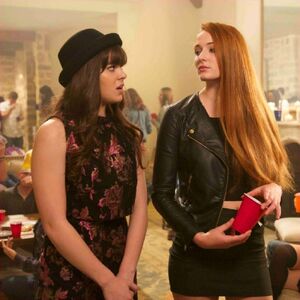 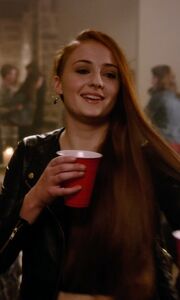 Heather flirts in front of Cash. 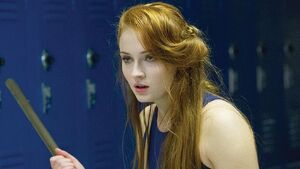 Heather battles Megan in the hallway... 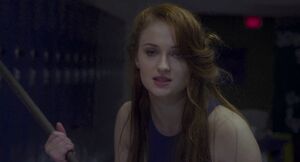 ...and tries hurting her. 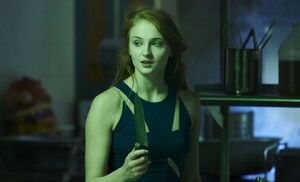 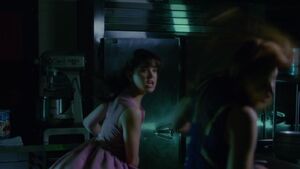 After being stabbed by Liz, Megan knocks out Heather. 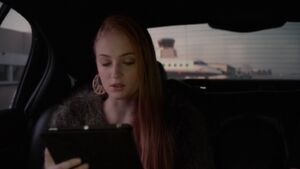 Refusing to give up, 84 demands to find out where Megan is going to college.
Add a photo to this gallery
Retrieved from "https://villains.fandom.com/wiki/Agent_84?oldid=3860591"
Community content is available under CC-BY-SA unless otherwise noted.