8Agent John Bishop is a major antagonist in the Teenage Mutant Ninja Turtles series. He serves one of the two main antagonists of third season (alongside Utrom Shredder), one of the three main antagonists of the fourth season of the 2003 series (alongside Karai and Hun), and a supporting character in the sixth season, Teenage Mutant Ninja Turtles: Fast Forward. He was also mentioned in the Mirage comics and appears in the IDW comics as a major antagonist as well as being mentioned off-panel in the Mirage Comics. He was voiced by David Zen Mansley.

In 1815 New Orleans (Seemingly during the Battle of New Orleans), Bishop was abducted by a group of Aliens. The Aliens experimented on Bishop and returned him to Earth, seemingly physically unaffected. From then on, Bishop developed a great hatred towards aliens and vowed to protect Earth from extraterrestrial threats.

In 1947 Roswell, New Mexico, Bishop and a group of army soldiers shoot down an alien space ship. Bishop personally confronted the captured Alien with a grin on his face.

Bishop first appeared during the Triceratons invasion of Earth, being present for a meeting of the United Nations after thier nuclear missiles didn't make it past the planetary force field. He is seen making a call to a mysterious benefactor and told him to start making preparations.

Later, after the Triceratrons withdrew after they realized Professor Honeycutt was not on Earth due to his posotronic energy signature not being present, he was authorized by the UN to do whatever it took to deal with the invaders.

He orders his men to capture the Turtles and Professor Honeycutt alive. They are taken to his lab where Bishop says he knows about them, including their names. It turns out he made an alliance with General Blanque of the Federation (his afore-mentioned secret benefactor) into handing over Honeycutt in exchange for the Turtles, With them on his side, Bishop plans on dissecting them for mutant DNA so he could mutate soldiers into mutants to create an army to defend the . He battles the Turtles, Splinter, Leatherhead, April, and Casey, and gets the upper hand on them. After they turned the tables, he realized that he was heavily outnumbered so escapes with the DNA samples through a secret door, but not before declaring that they will meet again.

Next, he kidnaps Karai, and threatens Oroku Saki, aka the Shredder, into giving him his work in exchange for her safety. However, instead of surrendering, Saki sends Hun to retrieve Karai. Bishop fights the Turtles with Hun and Karai, and appears to get the upper hand again. He escapes again.

Bishop kidnaps Splinter, the Turtles' master, for his rat DNA to be part of his slayers. While in the fight, Bishop is thrown by the explosion and impaled by a hook. However, when the Turtles look back, he is gone and has gray liquid on him, suggesting he is not human.

He then leads an assault on Saki's mansion. At that time, he has Baxter Stockman working by his side. Here, he defeats several of his henchmen, including Hun but ends up failing to complete his goal.

When the EPF is threatened of getting its funding cut due to the attack at Oroku Saki's mansion and failure to capture Finn, Bishop faked an alien invasion in order to prove to the President, the one who plans on cutting his organizations funding, of how useful the organization is. His plan worked as the President agrees to give him money to fund the EPF.

However, it gets worst when the aliens that Bishop used for his false invasion had their mutagenic goo go into the sewers. This resulted in some animals and a citizen of New York to be mutated. Because of this, he tries to warn Stockman to postpone his attempt to get a new human body. But his head scientist was too focused on creating his own body. But it proved to be a failure after a series of hallucinations and decomposition's. When Stockman is presumed dead in the river, Bishop picks his body up and resurrected him to fix the outbreak.

The Turtles (excluding Donatello who was infected) demanded they give a cure. Bishop agreed, having Stockman work with Leatherhead, while he had them retrieve the Heart of Tengu, which he heard from a mysterious contact that it was an archive of alien technologies. Once they got it to him, he had Area 51 self-destruct to cover its existence (though they all left before that) and had the cure spread everyplace in New York. But when they use lasers to try to crack the Heart, it shattered, as the entity cut off communications. What Bishop didn't known was that the entity was the Water Foot Mystic, who was manipulating everyone so that Karai's control over them will be broken.

Stockman recovered a number of nanobots from a Triceraton wreck at Coney Island, which they presumed to be a new alien technology, not knowing it is a government project. Stockman places a microchip on one of the nanobots, activating them to serve Bishop's commands. Unfortunately, they found out that the nanos were intelligent and that its original programming was fighting with Stockmans and gathered all advanced technologies as it escaped, underlining Stockman's overconfidence once more to Bishop. Later he joins forces with the Turtles and other heroes and villains in fighting against the Tengu Shredder.

A Century of Change

Bishop eventually hired Stockman back to use alien DNA as part of his Earth defense project. This lead to creation of Organic Mousers. However, a lab fire broke out one day and Bishop got pinned by rumble while trying to save Stockman. To Bishop's surprise, a captive alien that got free decided to save him despite being subjected to DNA tests. It was this action that showed Bishop that aliens were just people who lived on other worlds; they were capable of mercy and war just like humans.

Bishop decided that to protect Earth, the plan had to change; rather than repel aliens from Earth, he should reach out to peaceful races to create a cooperative between worlds to help against the real criminals. Thus Bisbop spent the entirely of the 21st century evolving the Earth Defense Force into the Pan Galactic Alliance. Thanks to his Immortality, Bishop remained the president of the organization and always ensured fair and impartial law for everyone on Earth, which now included aliens.

When the Turtles travel to the year 2105, they are surprised to find Bishop is the president of the Pan Galactic Alliance - essentially, the leader of the entire planet Earth, and the ambassador to other planets.

Bishop appears in the IDW comics where is origins are different. He was born a deformed human with intelligence and that his father worked in the Government. As an adult he is dwarf sized so his father created a suit to help him fit in society better. Like his 2003 incarnation, Bishop is xenophobic towards all mutants and aliens, but is more unhinged than his 2003 incarnation and prone to emotional outbursts.

Due to being cybernetically enhanced on, Bishop is immortal and a dangerous martial artist. He held his own against seven fighters and took out Hun, and Shredder's elite guards. Bishop also has high intelligence, fooling even the President with his schemes. Furthermore, while his intellect isn't at Baxter's level, he still is highly knowledgeable in several scientific disciplines. These include biology, genetics, and engineering. He even advised Baxter to avoid replacing his body as he suspected that it would drive him insane.

Bishop's best feat of skill would be in the episode Hun on The Run. In this episode's climax, he takes on Hun, Karai, and the Turtles and almost comes up on top. On the other hand, he isn't as skilled as Master Splinter as shown when the latter defeats him with considerable effort. 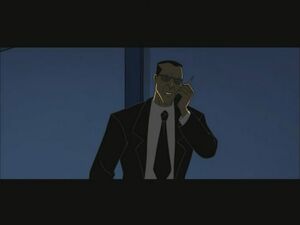 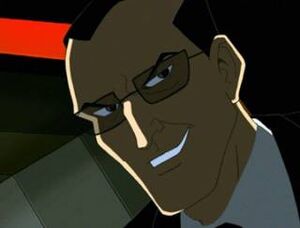 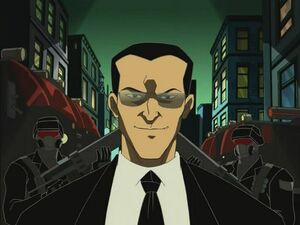 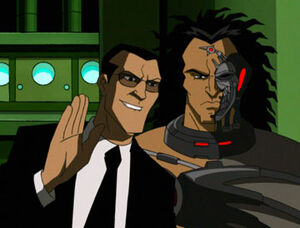 Agent Bishop and the Slayer. 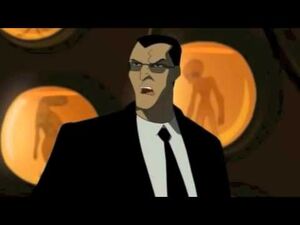 Agent Bishop angry that the bureaucrats at D.C. plan to cut his organization's funding. 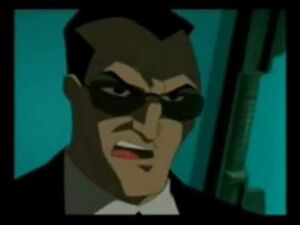 "Blow that ship out of the sky!" 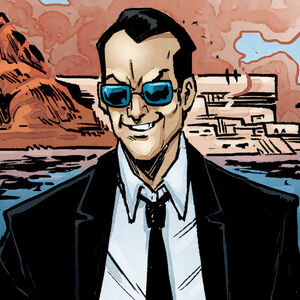 Bishop in the IDW comics 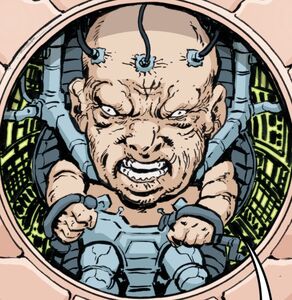