Top agent of One Concern

None (Mostly due to her disliking pretty much everything)

Agent Black is a major antagonist from Iconoclasts.

She is an agent of One Concern, likely the oldest of them, whose job is to investigate reports of people who commit sin and enact penance upon them. One of many transcended agents, Black possesses an extended lifespan and nigh-invulnerability, as well as superhuman strength and reflexes, though this all came at the cost of her arms, which were replaced by heavy mechanical ones, and a never-ending headache which she describes as "thousands of knives piercing her head". This made her extremely sensitive to loud noises, which only aggravates her headache.

As a result of both her transcendence and the headaches, Black became a mentally unstable individual, constantly bored or annoyed by the people and things around her and prone to violent outbursts of anger at the slightest provocation. She's a pragmatic agent, only concerned with completing her job at all costs and angered at having to follow rituals and customs and at anyone interfering with her. She's not shown to care for anyone, merely tolerating the presence of her fellow agents, or at least the ones who don't get in her way. Despite this she's shown to hold deep grudges against anyone she feels have wronged her in any manner, going to great lengths to exact revenge upon them.

Almost nothing is known of Black's previous life before her transcendence, as Black herself only has a vague recollection of it. All she remembers is of a man suggesting her to transcend and that something important made her go through with the procedure. For a while she couldn't endure the pain caused by her cluster headaches, attempting to take her own life many times before accepting she simply couldn't die.

Through her almost two centuries of life she was approached by her fellow agent Gray, who attempted to hit on her many times only for her to dismiss him every time and treat him with sarcasm. During this time she attempted to find another purpose for her life other than her job, allowing Gray to approach her despite her clear annoyance at his advances. During a regular discussion Gray presents her to Elro, a ChemiCo officer whose father had recently died from Penance. Gray gives him his condolences, but Elro dismisses Gray's pity and calls him out for being a hypocrite, stabbing him with a syringe containing a formula he created which could kill transcended agents. Soon, Gray starts boiling up, exploding on Black's arms. This event causes Black to grow a deep grudge against Elro, making it her goal to kill Elro at any cost.

Agent Black makes her first appearance after Robin destroys The Controller which brought Penance upon House 3 of Settlement 17. She is waiting inside Robin's home with her right-hand Agent White, having followed rumors saying Robin is practicing maintenance on the homes in her settlement without a license. Since they couldn't find any evidence of Robin's transgression she just lectures her, but the two leave after Black receives a notification about Elro's location on her handheld.

She is next seen in the settlement itself, performing Penance of Elro's house, having waited for him to be inside of the house performing a sin to justify his Penance. Black shows contempt for not showing Royal his domain (although she can't stand him), then commands Robin to be imprisoned rather than bringing her home, needing a moment to gain her composure after successfully finding and performing Penance on Elro. Inside the prison Robin meets with Mina, who helps her escape.

After Mina and Robin escape Concern's forces, they end up lost in the Shard Wastelands. There, Robin meets a young man with Ivory powers called Royal. They start talking and becoming friends until an Isi Machine called Lobuka detects Royal as a Concern agent and attacks both of them. After they destroy the machine, Royal wants Robin to be recognized for his acts and takes her to a Concern camp in the middle of the Shard Wastelands. There, Agent Black discusses with the Concern infantry general, Chrome, about him not doing his work in finding and killing Isi enforcers (calling them pirates). Black relies of how Chrome uses his affably attitude to justify his narcissism, and how he has this "beauty contest" with Royal, in which Chrome is losing. Black finally loses his patience with Chrome and goes to supervise the camp in other place. After Royal presents Robin to the entire camp, not knowing she was being hunted by them, Chrome orders to fetch both Agent Black and Agent White. They declared that Robin should be bestowed penance, but Black couldn't bear having her in sight anymore, and tells that they should kill her right now. Chrome orders Royal to kill Robin using his ivory powers, but Black notices that Royal was planning something. And so, Royal raises Robin in the air with a big blast so she could use the Concern Train and escape. After Royal helps Robin in defeating Chrome, the train crashes and Robin ends up unconscious. Royal meets Mina and they both bring Robin to Mina's home, the Isi Settlement. 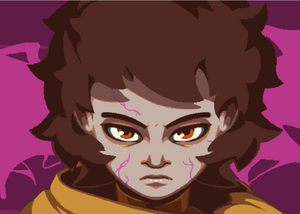 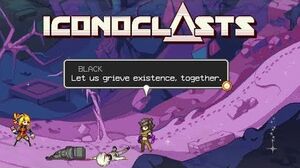 Iconoclasts - All Agent Black Scenes & Dialogues
Add a photo to this gallery
Retrieved from "https://villains.fandom.com/wiki/Agent_Black?oldid=3775138"
Community content is available under CC-BY-SA unless otherwise noted.