Wreaking havoc.
Barbecuing with his katana.

Prevent the Earth residents escape and arrive to Elysium (formerly).

Kill Delacourt for getting him fired off his job as an agent (succeeded).
Defeat and kill Max Da Costa and all his allies then to use Max's data inside his head in order to conquer Elysium under his own order (all failed).

Agent Kruger is the central antagonist of the 2013 sci-fi action film Elysium and the archenemy of the film's protagonist Max Da Costa.

He was portrayed by Sharlto Copley, who also played Adrian Pryce in Spike Lee's 2013 adaptation of Oldboy, and King Stefan in the 2014 film Maleficent.

Designated by the Civil Cooperation Bureau as Agent 32 Alpha 21b, Kruger is a mercenary working as Secretary Jessica Delacourt's personal sleeper agent. Born in 1970, Kruger has been employed as a CCB contractor since 2042.

From his dialect, as well as the South African flag found on his vessel, it can be assumed that Kruger is an Afrikaner.

He is first seen after Delacourt orders him to shoot down three hijacked shuttles, each containing sick and elderly civilians from Earth looking for a new opportunity on Elysium. It is revealed that he is notorious for committing numerous human rights violations, including rape and torture and President Patel fires him shortly after Elysium's council found out how Delacourt destroyed two of the shuttles.

Kruger finds himself re-employed by Delacourt when John Carlyle, a CEO stationed on Earth, is attacked by Max Da Costa and Spider's crew. Now accompanied by Drake and Crowe, Kruger makes short work of Spider's crew, killing Max's best friend Julio and stabbing Max in the stomach as he escaped. During hunting for Max, one of Kruger's drones found Max leaving Frey Santiago's house. He brutally interrogates Frey in front of her daughter Matilda, before deciding to kidnap them both to take them to Elysium. Not long afterwards, Max returns near the downed drone and bargains with Kruger to take him to Elysium in exchange for the reboot program (threatening suicide by live grenade). During the shuttle ride, Kruger sexually harasses Frey, angering Max and driving him to active the grenade just as the shuttle began its landing approach on Elysium. The grenade detonates, causing the shuttle to crash and Kruger's face to be severely disfigured by the blast.

During the climax, after his squadmates lock up Frey and Matilda in the armory, they use a Med-Pod to reconstruct Kruger's face. As he recovers, Delacourt enters the armory and chastises him for letting the situation go out of control. Now aware of the potential power of the code currently in Max's head, Kruger stabs Delacourt with a mirror shard and leaves her to die with Frey and Matilda. He soon upgrades himself with a next-generation, military-grade Exosuit and he madly rampages through Elysium's base of operations, while his squadmates kill most of Elysium's political leaders and plan to install Kruger as the new president of Elysium.

Battle with Max and Death

After rescuing Frey and Matilda, Max joins Spider and a bodyguard, where they run into Kruger, who stabs Spider's hand and attempts to kill Max by destroying his Exosuit. However, Max rips Kruger's link to his Exosuit out of his head and disables his Exosuit. Realizing that he is now vulnerable, Kruger triggers a grenade, planning to kill Max as well as himself. However, Max takes advantage of his now-superior strength to toss Kruger off the bridge leading to the main control hub, leaving him to die by his own grenade.

He is a ruthless, dangerously unstable, sadistic and megalomaniacal special mercenary, and a senior agent for Civil Cooperation Bureau and for the Elysium space station who is bent on conquering Elysium. Known for being a ruthless mercenary, Kruger has a knack for killing and enjoys watching his targets brutally die. According to his psych evaluation, Kruger suffers from paranoia, schizophrenia, antisocial personality, dependent personality, histrionic personality, and anger management issues.

That said, he is able to fake politeness when it suits him, as seen with Frey and his daughter by politely talking to Frey before brutally torturing her. He even claims he does not like hurt children, asking Frey's daughter to close her eyes during the interrogation. However, this claim is revealed to be a lie, as he tells Frey he will make sure her daughter will never heal from her injury. Also, while affable enough with his men, they are afraid of him, implying he would not hesitate to kill them if they cross him or on a whim. This is shown when an agitated Kruger recovered from his injuries, holding his men at gunpoint for no reason.

He is a skilled swordsman, mostly relying on his katana to dispatch his enemies. He's also reliant on a force-field shield, allowing him to deflect bullets fired by Spider's men and to continue assaulting his enemies using melee.

Given that Kruger is outfitted with an Exosuit, his physical strength rivals Max Da Costa's. This is further improved when his squadmates install a military-grade, next-gen Exosuit, allowing him to gain speed and strength far greater than normally possible. 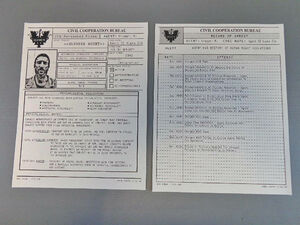 Kruger attempting to kill Max Da Costa and his associates.

Kruger interrogating Max's friend Frey on his whereabouts, after discovering she has been helping him.

Kruger welcoming Max on board his aircraft, knowing he has valuable data stored inside his head.

Kruger about to be seriously injured by a grenade blast.

Kruger's face is reconstructed in one of Elysium's Med Bays.

Kruger speaking with his boss, Jessica Delacourt, moments before killing her.

Kruger threatening to destroy Max and take over Elysium.

Kruger is blown apart by his own grenade after being hurled over a ledge by Max. 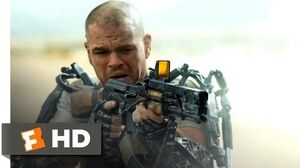 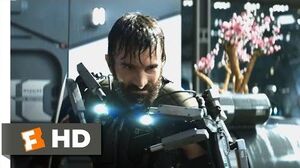