Gain as much power as possible (succeeded, later failed).

He was portrayed by Jaiden Cannatelli.

Just like the other kids at the Odd Squad Academy, Ohlm had to attend the academy and pass the quizzes that were assigned to him. He managed to get good grades on his assignments and eventually got honored and hired to be an official Odd Squad agent. But Ohlm was unsatisfied with this and wanted to be the Big O, and the academy girl said: "well, after lots of hard work and years of training". Ohlm asked "so, you won't give me the job right away?", and the academy girl answered, "no, that's ridiculous." Ohlm was impatient and declared he would destroy Odd Squad. But the academy girl didn't hear him because she had water in her ear.

When Ohlm became an official Odd Squad agent, he hid his true intentions by pretending to be an idiot. Whenever he attended Odd Squad, he would act like a fool by failing his cases on purpose, eating yogurt with the wrong end of the spoon and acting like a happy-go-lucky child. But when no one was looking, Ohlm secretly gave the villains the information they needed and introduced them to the gadgets and combining them. Unfortunately, something would always go wrong, and Ohlm would be left in a frustrated state, but things changed for him later.

After Olympia accidentally got Otis and Ms. O fired from Odd Squad, the Big O was selecting the new Ms. O for the squad. He said that while all the kids were reasonable candidates, only one of them gave him an action figure: Ohlm. So he decided to give Ohlm the Mr. O position for the squad, much to everyone's dismay. He kept up his stupidity act, and told the agents to give him all of their gadgets, so he could put stickers on them. Meanwhile, Olympia and Oona realized that the villain break-ins started before Otis joined the squad, so he couldn't be the mastermind behind the break-ins, meaning Ms. O was also innocent. The two of them told Otis and Ms. O the truth and went out to find the real mastermind. They kept Otis hidden, so the culprit wouldn't go back in hiding. The four of them went in the Odd Squad Files Room and searched through the extremely large file amount in the agents' history. Then, they thought about Ohlm being Mr. O and realized every single time he was in headquarters, there was a villain break-in. They also realized Ohlm was pretending to be a fool so no one would suspect him. Seconds later, Ohlm shows up, with yogurt and eats with the right side of his spoon, revealing he was faking his idiocy.

Ohlm puts on a pair of glasses as he reveals his true intentions. He explained what happened at the academy, and that he sold out the agents and give the villains Odd Squad's plans. Now that he had the role of Mr. O, he was in a position to take down Odd Squad. He reveals that he never wanted to put stickers on the gadgets (even if he does like stickers), and took out a sticker-inator, and trapped the gang in a giant banana sticker stuck to a wall. Agent Ozlyn gave Ohlm the last of the squad's gadgets, and Ohlm said "excellent" and let out another evil laugh. Ozlyn felt like Ohlm was evil, and he felt like she was right. He grabbed the Hairbrush-inator and the Hat-inator, combining them together to make the Freeze-inator which he froze Ozlyn with. Eventually, the main quartet gets out of the banana sticker and chases after Ohlm.

It turns out the reason Ohlm took all of the squad's gadgets was to combine them to 10,000 and create a Black-hole-inator that would suck up every Odd Squad agent (including himself). Ohlm nearly gets sucked into the black hole but Ms. O goes back for him and saves him. Olympia told Otis and Oona that they needed to take the gadgets apart, but Oona said "whoa, whoa, you can't just take away any gadget! Then it won't equal 10,000 and it'll do something else. Believe it or not, it could be even worse than that!" Ohlm told Ms. O "Ew! Your hand is sweaty!", to which she replied that she was saving him, and he asked her if she could do it without sweating so much. Otis told Olympia and Oona that they needed to take away a specific gadget to get a specific number, and asked Oona "Oona, what's a good number?".

She answered what it was. Ms. O's hand was slipping, and she said "Agents, help! My hand is slipping!", and Ohlm said "It's because they're so sweaty!" Oona told Ms. O that she was coming, told Otis and Olympia that they needed to find the difference between 10,000 and 9,995, and that it was their answer. Then Oona went to go get her robot suit. Olympia told Otis to let each other use the number line, and they sat down. She enlarged the hexagon-shaped part of her smartwatch. Ms. O's hand slipped and Oona saved both her and Ohlm in her robot suit. Ohlm said "Ew! Your robot hand is sweaty, too!", but Oona replied "You've got the sweaty hands! That's the problem!". Otis told Olympia that they needed to find out how many numbers were between 10,000 and 9,995, and she replied that they could count up from 9,995. Her smartwatch started responding when Otis said "that's 1, 2, 3, 4, 5.". He also told Olympia that they needed to take away gadget #5, and when they stood back up, he asked "Where is it?", and she pointed at where it was, answered "Way up there!", and told Otis that they'd never reach it in time.

Otis asked Olympia "Olympia, remember how I told you my duck family used to fly south for the winter?", but she asked if they were seriously talking about that right then, and he told her that what he didn't tell her is "I flew with them." He then flew up to gadget #5 and separated it from the other gadgets, turning 10,000 into 9,995. With #5 separated, the black hole was cancelled and Ohlm's plan was foiled. Turns out gadget 9,995 was the Pineapple-inator.

Otis asked if Ohlm was okay from the black hole. Ohlm was mad that Odd Squad was not destroyed like he wanted, and he vowed to keep fighting to destroy Odd Squad. With no options left, Ms. O realized the only thing left to do was to tell Ohlm's parents about his evil plan, and how he almost destroyed the world. Ohlm tried to explain, but his parents punished him and sent him to his bedroom. 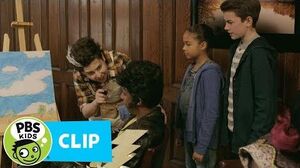 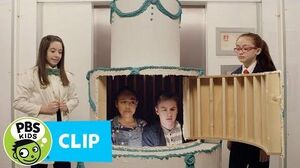 ODD SQUAD A Villain on the Inside PBS KIDS 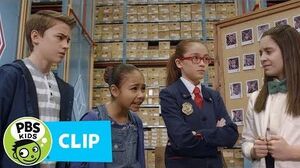 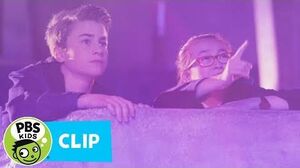