Member of the Flecks police

To kill Lake for acting as her own individual and to avenge Mace's death (failed).

He was voiced by Bradley Whitford, who also portrayed Eric Gordon in Billy Madison, Steve Hadley in The Cabin in the Woods, Dean Armitage in Get Out and President Gray in The Darkest Minds.

Agent Sieve is a chrome man that wears armor with a latex mask that hides his metallic identity.

Agent Sieve is a ruthless chrome cop that is tasked with hunting down rogue reflections known as Slivers and killing them, primarily by "sanding" them out of existence.

Sieve is the more manipulative of the Fleck duo as he attempts to reason with people in a more calm, convincing, and deceitful manner.

However, after the death of his colleague Mace, Sieve became more ruthless and vowed to avenge his death by killing Lake instead of bringing her in alive.

In the Book 1 episode "The Chrome Car", Sieve made his debut were he teamed up with Special Agent Mace to hunt down Lake while locking Tulip her Prime in their car. Tulip manages to escape and Lake reflects into the tool mirror, becoming her own person and escaping the Flecks.

In Book 2, Sieve becomes a recurring antagonist alongside Mace. In the episode The Black Market Car, Sieve accompanies Mace in pursuing Lake through a Slug Person's shattered eye glass. However, Lake is able to evade the duo by hiding next to a magic deer named Alan Dracula.

In the episode "The Map Car", after a crazy cloud man named Marcel is killed, the drawn water turns back into regular water after the map is complete. This causes the water to become reflective, allowing Mace and Sieve the opportunity to track down Lake and her friend Jesse whom she meet during her time in the Family Tree Car.

In the follow-up episode "The Toad Car", Sieve and Mace pursue Lake, Jesse, and Alan Dracula as they are escaping from the Map Car. The duo are locked out of the Toad Car as they try to bust down the door. During the wait as both Lake and Jesse refuse to kick a talking toad named Terrance, Sieve begins to manipulate Jesse by stating that he isn't the bad guy and Lake is, stating that she broke the law in the mirror world by becoming her own individual. During the deceitful discussion, Mace brings in an item known as "The Lawbreaker" to burn down the door to the Toad Car with Sieve taunting Jesse, stating that he should have sided with them when he had the chance. Eventually, Alan Dracula kicks Terrance which causes the door to open. Lake and Jesse take Terrance with them as he is needed for access to the other cars. That topped with the fact that the plug for the Lawbreaker was broken by the closing door left the two Flecks trapped in the Toad Car.

They eventually escape in the episode "The Mall Car" when the leader of the Apex, Grace uses her compact mirror to allow the Flecs to pursue Lake and Jesse. Jesse's number eventually gets down to "0" which causes a portal door to Arizona to open. Unfortunately, Lake is unable to crossover to the real world with Jesse, as she is a denizen of the Train and not a passenger like Jesse. Desperately, Jesse tries to go back to her but is pulled back by the force of the portal, leaving Lake in the mercy of the Flecks.

In "The Wasteland", Mace and Sieve pursue Lake and Alan Dracula to the top of the Infinity Train, though Lake is able to commandeer a stolen Apex pack shooting the harpoon cable at Sieve, sending him plummeting into one of the train's bridges. Sieve could only watch in horror as Lake, Alan Dracula, and his partner Mace fall off the Train into the Wasteland.

In the Book 2 finale "The Number Car", Sieve entered the Passenger Preparation Car when the power goes out, going through the monitor. He witnessed Lake murdering Mace, and now seeks to avenge his death by immediately killing Lake instead of bringing her back alive in the Chrome Car. He tries manipulating One-One but to no avail. Annoyed, Sieve wildly swings his Sander to kill Lake but gets his Sander stuck on a mechanism in the Car. Eventually, Lake's hand reflects off of Jesse and she gets a number as One-One agrees to put their number down to "0", allowing both of them to enter through the portal door leading to Arizona. Just as Lake is about to make it in, Sieve grabs her by the ankle, stating she's finished. In an act of desperation, Lake throws a patch of grass at Sieve's cheek, causing a leaf to fly by Alan Dracula. Sensing that his friend is in danger, the deer shoots Sieve with his eye lasers causing the latter to explode, killing him. 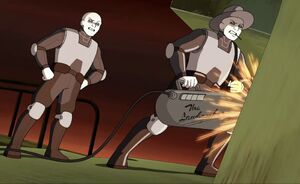 Agent Sieve with Special Agent Mace.
Add a photo to this gallery

Retrieved from "https://villains.fandom.com/wiki/Agent_Sieve?oldid=4273696"
Community content is available under CC-BY-SA unless otherwise noted.