He is the personal assistant of Dr. Robotnik, with whom he originally aided in trying to capture Sonic when the government assigned them to do the task. Following Robotnik's defeat, Stone begins following Robotnik's manifesto to survive without him; this lasted until Robotnik manages to return from the mushroom world and Stone quickly rejoins Robotnik in his quest for world domination and revenge against Sonic.

He was portrayed by Lee Majdoub.

Agent Stone is first seen in the film accompanying his egomanical boss, Dr. Robotnik, to investigate the power outage accidentally caused by Sonic. He and Robotnik start to harass and belittle Major Bennington, "translating" Robotnik's words for Bennington as Robotnik sends his army of drones to locate the source energy and begins the investigation. He is later seen with Robotnik who analyzes Sonic's footprint.

After one of the protagonists of the film, Tom Wachowski punches Robotnik in the face escapes with Sonic, Stone quickly enters Tom's house and helps Robotnik, only to be humiliated by him for not chasing after Tom and Sonic instead. Stone then found Sonic's leftover quill.

When Tom and calls the Green Hill Police Station, Robotnik, Stone, and other agents monitor the call. Stone is later seen accompanying Robotnik interrogating a bar patron who was encountered by Tom and Sonic.

After Robotnik fails to capture Sonic and having his drones destroyed, he orders Stone pin himself to the wall and starts to vent his frustrations onto him before noticing Sonic's quill in Stone's jacket and begins to analyze it.

After Robotnik is sent to the Mushroom Planet in the final battle, he begins to lose his sanity. This is shown as he finds a rock that resembles a human face and calls it "Agent Stone" and lugs it around.

After the events of the first film, Agent Stone found a contingency plan by Robotnik that was left for Stone prior to his final fight with Sonic in case he was defeated so that Stone could survive without him. In it, Robotnik gave Stone instructions on how he could succeed him and take over the world. Stone's first step was to retrieve Robotnik's Control Glove so he could control Badniks, which was located in a bank. Stone hired Lindsey and Jason, a pair of thieves, to rob the bank and find the glove. However, Lindsey and Jason turned on him after they realized the power of the Badniks and attempted to take the glove for themselves, but Stone managed to hack the final Badnik they summoned and used it to take the glove from them. After gaining the Robotnik Control Glove, he had to ingratiate himself into the society of Green Hills and slowly take it over from inside. To do this, he became a Barista for a coffee shop, but his boss, Karen treated him very poorly, even spitting his own latte in his face in disgust and telling him to clean up her mess.

He remembered that Robotnik had warned him about all sorts of people, such as suckers, scammers, and people without ambition. Stone told one of his co-workers that he would be controlling everything in the shop in about a week, and would make Karen bow to him. On his first day, his co-worker Tina asked him to cover for him the weekend as she had an important family meeting to attend, which Stone accepted, but Tina was lying about the family meeting, instead wanting to go to the beach and take a week off. Believing she was clever for tricking Stone, she had only fallen into Stone's trap, who had several Badniks dismantle her car behind her so that she couldn't go back home, leaving her stranded on the beach. Since Tina could not come to work, Karen replaced her with Stone, who moved up in the ranks.

With Karen gone, Stone became the new owner, and he could change the name of the shop to whatever he wanted, changing it to Mean Bean Coffee Café.

A few months later, Agent Stone was still making lattes for his clients, though he still missed Robotnik, and his job with him until he got a text from his boss about making his Austrian goat latte, which got him excited, and he kicked everyone out. of the store to celebrate and announce the return of his boss.

After Robotnik appeared with a new look, as he was bald, and with a new mustache, he was well dressed for his arrival, and gave him his latte until he met Robotnik's new ally, Knuckles, a warrior echidna, and He cried out in pain as he shook his hand because Knuckles had big fists.

Stone, Robotnik, and Knuckles opened Robotnik's new base, and he learned about the Master Emerald, an emerald of great power, and was amazed at the power his boss would have, as he would use it to exact revenge on Sonic. He stayed in the cafeteria while Knuckles got upset with Robotnik for leaving Stone behind.

A day later, he was looking for new suits for Robotnik, but was interrupted by Wade Whipple, a police friend of Sonic's, who thought he was a robot because of his hands, though Stone proved to be human, and was questioned by Wade about bagels. Stone was rescued by Robotnik, who possessed the power of the Master Emerald, and in order not to abandon his boss again, he decided to go with Robotnik to form a tornado by the power of the Emerald.

With the Death Egg Robot built, Stone was inside with Dr. Robotnik as they celebrated the destruction until Sonic, Tails, and Knuckles showed up to stop them, and he had to learn how to use the robot, and Robotnik launched the missiles at the heroes. During the fight, Stone was knocked out until the robot's destruction. However, Stone somehow survived, and disguised himself as a G.U.N. agent, and heard something called Project Shadow.

Stone is an average heighted slim man in his late twenties to early 30s with short, slicked black hair and brown eyes and has a neatly trimmed beard. He also wears a black suit with a navy shirt and black tie.

At first, Stone appears to be a normal and level-headed man and very loyal to his boss, as he is used to Robotnik's antics and understands him more than anyone else. He has also shown to be a complete subservient to Robotnik, as he takes the abuse and humiliation from Robotnik without question. He also genuinely cares for or admires Robotnik, to the point of making a latte for him, and considering Robotnik enjoyed the latte, Stone is the only person Robotnik has shown any kindness to.

However, it is shown that Stone can be nearly as dangerous as Robotnik himself in the comic book Sonic the Hedgehog 2: The Official Movie Pre-Quill. How he looks up to Robotnik goes even further, as he is obsessed over him, missing him during his absence, and having coffee drinks forming the shape of his and Robotniks face with heart shapes surrounding them. 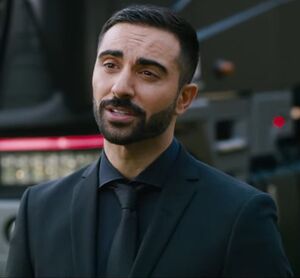 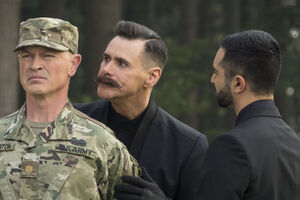