Oppressive Spy
Agent Tierny is one of the two main antagonists (alongside Commander Pyre) of the animated series Star Wars Resistance. She serves as a major antagonist in Season 1 and as the main antagonist of Season 2.

She serves as an agent in the First Order Security Bureau who was sent to investigate the Colossus after reports showed several members of the mechanic crew were affiliated with the Resistance.

She was voiced by Sumalee Montano, who also played the Wu Sisters in Kung Fu Panda: Secrets of the Masters, Melanie Pratt in NCIS: New Orleans, Shi Long in Kung Fu Panda: The Paws of Destiny and the Emerald Empress in Justice League vs. the Fatal Five.

Instead of aggressive interrogation tactics, Tierny was a master manipulator who preferred to lure her targets into a false sense of security. She hoped to restore peace to the galaxy through absolute order.

Tierny used her persuasion skills to sow a wedge between Ryvora and her employer Yeager and friend Xiono, claiming that they had withheld information from her because they did not trust her. Tierny also recognized that Ryvora would make a good asset to the First Order due to her piloting skills and offered her a place in the First Order. Despite promoting a positive image of the First Order to Ryvora, Tierny did nothing to help stormtroopers who had fallen onto the landing platform at Doza Tower during the Battle of Castilon.

In 34 ABY, Agent Tierny was called to Castillon by Commander Pyre, as he had identified a Resistance spy on the platform and those who were sheltering him, Kazuda Xiono, the spy, and his companions, Jarek Yeager, Neeku Vozo and Tam Ryvora. Kazuda, Neeku and Yeager escaped the capture of Pyre, but Tam Ryvora voluntarily surrendered to the First Order, because she did not know that Kazuda was a spy of the Resistance and did not believe the First Order was so bad, but they captured and treated her aggressively, until Tierny arrived, and could do what she does best: manipulate to get information.

Upon arrival, Tierny was already aware of the situation, and asked Pyre if the others had been captured, and the commander said that not yet, but soon that would change, and then asked to speak with Tam, saying she could be useful.

Ryvora was brought before them, and Tierny approached amicably expressing apologies for the aggressive treatment of the First Order, and then told her that she wanted to ask her some simple questions, starting with the fact that if she knew anything about the Resistance, telling her they were violent and dangerous, using the well-known pilot Poe Dameron to make the First Order look like a victim, and took her to the rest room of the Ace Squad to interrogate her privately.

There she gradually won over Tam, offering her good food that she never had a chance to have, and putting the tyrannical desires of the First Order in a more idealistic way to gain her sympathy, and pretending to be on her side, and when she told her that her friends were not spies, Tierny revealed the true story of Kazuda, making her trust him less, since as far as she knew, his alibi was true until then, and told her that he was recruited by the Resistance, and then weakening confidence in her friends, Tierny was beginning to get what she was looking for.

Shortly after, Kazuda and his friends sank the Colossus under the ocean with Torra Doza's help to the level of the communications antenna and ask the Resistance for help, and Tierny and Tam felt the sinking, and she went to see what was happening in the office from Doza, telling Pyre that it seemed convenient for that to happen the same day they discovered Resistance members on the platform, and Pyre agreed with that.

After this, Pyre went to see what was happening and managed to capture Yeager, but could not prevent Xiono from sending the message to the Resistance or escaping, although it did not matter since they could not send help at that time, and later Pyre arrested Doza himself, and Tierny returned with Tam.

Tierny was beginning to encourage Tam, telling her that she deserved more than the Colossus, and then she showed Yeager taking the blame for Kaz, and at that moment Tierny beat Tam, telling her that they used and manipulated her, and Tam could no longer trust anyone but Tierny, for she was teaching her many things.

Walking through the level of cells, Tam crossed with Yeager, and accused him of having lied to her; something that was true, and Yeager did not look convincing being arrested by the First Order, saying that they were the ones who lied to her, and Tierny made her move along.

Later, Tam expressed interest in Kaz and Tierny told her that they still didn't find him, and wanted to know if there was a possible hiding place he could use, and Tam told her she didn't know. Then she made an impossible offer to deny Tam: fulfill her dreams of being a pilot by serving in the First Order, telling her that her dreams there would be a reality.

In the following events, the First Order used the Starkiller Base to destroy the New Republic and thus have its greatest victory, but Kazuda also freed Yeager and Doza, and gradually removed the First Order from the platform.

Tierny said Pyre was losing control of the platform, and decided to ask for reinforcements and destroy the platform if necessary, so they chose to leave the station, and when they were going to board their shuttle, Kazuda and Yeager arrived to try to convince Tam, but she was mad at them for lying to her, and left with the First Order after they took off.

After the agent's persuasion, the newly recruited cadet Ryvora renounced her friendship with Team Fireball. Later, after processing the conflict of loyalties between the First Order and her former crew, Ryvora turned in her own comlink that connected to Kazuda Xiono. Tierny and Pyre hence traced the comlink's signal to the former Resistance world of D'Qar, which was the site of a major conflict between the Order and the main Resistance group recently. Due to the choice of location for the space station's attempt of evading the Order, Tierny deduced that the Colossus' crew were unaware of the Resistance's recent escape from the First Order. As they caught the resistance cell in the middle of salvaging hyperfuel from the downed Fulminatrix, the two opposing forces once again draw fire against one another, with the Colossus aiming to protect Xiono and his coaxium extraction efforts for the functioning of the space station's hyperdrive engine. The Colossus was able to escape, yet not before receiving significant technical damage.

After learning that the Colossus had briefly docked on Aeos Prime and been helped by its people, Tierny and Pyre decided that the Aeosians had committed a crime punishable by death. The duo brought a fleet of Resurgent-class Star Destroyers to the system and bombarded the surface, killing the planet's entire population. This atrocity was enough to finally convince Tam to defect from the First Order and rejoin her friends.

Tired of failures from both Agent Tierny and Commander Pyre, Supreme Leader Kylo Ren uses the Force to force them to stand and aim their blasters at each other, wanting them to understand that he will not tolerate further failures.

During her final battle against the Colossus Resistance, Tierny receives a transmission from Supreme Leader Kylo Ren. Tierny tells Ren that she has the Colossus in her grasp but that she needs reinforcements. Ren however knows that she has failed and tells her that the First Order does not tolerate the weak. He asks if she understands. Tierny says she understands but Ren responds by Force-choking her, killing her mere moments before the Resurgent-class Star Destroyer Thunderer is obliterated by Colossus Resistance starfighters. 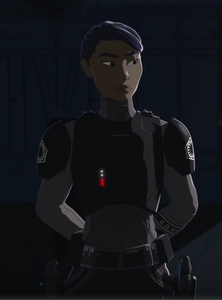 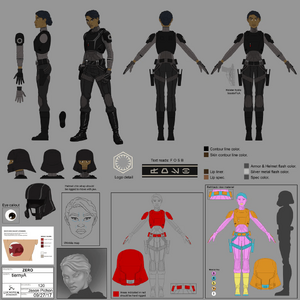