Villains Wiki
Register
Don't have an account?
Sign In
Advertisement
in: Male, Female, Partners in Crime,
and 15 more

Using the meat of the birds that Agnes kidnaps to make chopped meat.

Give their daughter a good education so she'll be an "respectable woman". (succeeded, in their vision)

Agnes's Parents are minor, yet pivotal antagonists in Monica's Gang. They are the parents of tAgnes, and they are the main reasons of her villainous nature.

They are a married couple who had an daughter, called Agnes, and cared a lot for their daughter's education, despite they having a very twisted vision of how a "good" education would look like. Even after their deaths, they still took care of Agnes as ghosts.

Before their deaths, Agnes's parents personality is unclear, but it's said that the only reason that they became ghosts after their deaths, instead of going to the afterlife, was their evil nature, and the big hatred in their hearts, implying that they were bad persons just as they are as ghosts. As ghosts, they act toxic and abusive to their daughter, despite thinking that they're making her an "respectful woman". They are also very sadistic, using the feathers and meat from the birds that Agnes often kidnap, to make pillows and chopped meat, and it is they also would kill, Maggy, Denise and Monica, for breaking into their house, and being a "bad influence" for their daughter. They are also hypocondriac, as they think they're allergic to everything and are extremely afraid of getting sick.

Agnes's parents were partners of Asclepio's House, an organization who seeks to rebuild the world at the way they found better. They had a daughter, who, despite having them as parents, lived in the Inverse Tower, an orphanage like magical building in which Asclepio's House constantly brought orphan children to teach the organization's principles. One day, due an insect invasion in the Inverse Tower, accidentally caused by one of the kids in it, Agnes's Parents died because of the diseases the insects brought. Agnes became extremely sad, and leaved the Tower, starting to live in an abandoned house. Her parents, however, due to their evil nature on Earth, became two shadowy ghosts, also started to live in that house and continue to teach their daughter "good" manners.

In "The Missing Birds", when Agnes kidnap and encage Maggy for breaking into her house, she reveals that her parents died, and that she live with their ghosts. Here, they are show to be as sadistic as their daughter, as they affirm that they uses the feathers and the meat from the birds Agnes often kidnap, to make pillows and chopped meat. Then they start to serve dinner to their daughter, and, hungry as always, Maggy finds a way to escape to go have dinner with them too. Before Agnes can put her in her cage again, dozens of birds appears, and starts to attack Agnes and her parents, leading them to run away. The birds were Agnes victims of kidnapping, realeased by Junior, Maggy's younger cousin.

They also appear in "Little Shadows from the Past", where Agnes capture Maggy's cat, Vanilla, which makes Maggy, Denise and Monica go to her house, to save him. When Agnes's Parents see Maggy running with Vanilla in their arms, they get out from a picture, and, stating that Maggy is a "bad influence" to their daughter, they'll "take care of her". They appear when the girls are running away from Agnes. Agnes's father roll up all of them with his stretchy body, and asks his wife if they can already take them to the kitchen, which she answer saying that they're too thin, and they'll have to fat them a little bit, with exception of Monica, who she affirms that she is chubby enough. That enrages Monica, who rabbit-hit Agnes's parents to knock out, showing that they aren't that resistant. Agnes then, put them all in a cage, but Maggy makes her realize, how she is different from her parents, and that she doesn't have to do what they order. Agnes free them, but after her parents wake up, her father shout at her loudly, saying that their daughter is a "respectable woman", and she can't be with people like Maggy and her friends. She grounds Agnes, and order her to change clothes. Maggy argues with him, saying she can't do that, which Agnes's father answer by saying he'd never let his daughter be "corrupted by bad influences" like her and her friends. Denise then realizes, that, if Agnes's parents taught her everything, they probably are also the origin of Agnes's fear of sickness and allergies. She then throws Vanilla on them, making them scared of the latter's fur, scaring them away and defeating them for the second time.

They do not makes any appearance in Monica's Gang and/or in the spin-off Monica Teen, as they presumably, finally, went to the afterlife so they can be judged to go to Hell. However, they can be considered the posthumerous overarching antagonists of the Shadows from the Past arc, as they are the reason of why Agnes became an shadow ghost just like them, and that's a very important point in the plot of this arc.

Agnes's parents looks like two elderly people, with black hair and eyes. Agnes's mother has spider legs, and uses a yellow robe, and a blue/red shirt, while Agnes's father has an extensible snake-like body and uses an green suit with a red tie in his first appearence, and a black suit with a blue tie in his second. 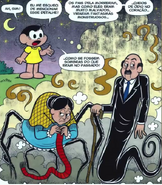