Stealing the youth of others.

Growing and dealing marijuana.
Tending to her demonic dog/familiar.
Witchcraft.

Remain young by feeding off of the youth of others.

Agnes is the main villain of the 2013 comedy-horror film Hansel & Gretel Get Baked. She is the film's version of the The Witch from the original Hansel and Gretel fairy tale written by the Brothers Grimm.

She was portrayed by Lara Flynn Boyle, who also played Serleena in Men In Black II.

Agnes is a witch who grows Black Forest, a particularly strong strain of marijuana. A stoner, Ashton, goes to get some Black Forest from Agnes, who knocks him out, straps him to a table, and proceeds to mutilate him, eat parts of his flesh and eventually draining his life-force to regain some of her youth.

Ashton's girlfriend, Gretel, and her brother, Hansel, come by Agnes' house in search of Ashton, but Agnes denies knowing where Ashton is. Gretel, however, remains unconvinced that she's telling the truth, but Hansel insists they should leave.

Later in the movie, Gretel breaks into Agnes' house and finds evidence that Ashton is dead, but she ends up captured. Hansel comes by Agnes' house and figures out her true nature, after which Agnes proceeds to knock him unconscious, only to then hear a knock at the door. She answers the door to find two police officers, whom she shoots before slamming the door, annoyed she's having a rough night.

Agnes then proceeds to strap Hansel to the table and prepares to cut him up until Gretel finds him. After a brief struggle, Gretel manages to push Agnes into her oven, free her brother, and escape. The oven explodes.

In the final scene, an electrician finds Agnes' pet cat and decides to take it home with him, only for the cat to attack him inside his truck and shift into the form of Agnes, who drives off. 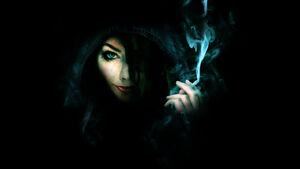 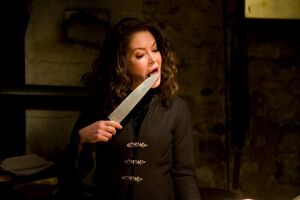 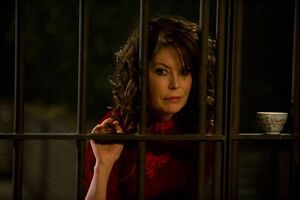 Agnes outside a cell 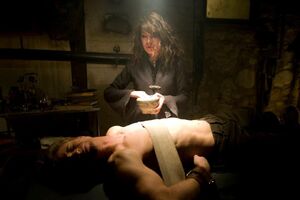 Agnes with a captured Hansel