The Shy
The Weirdo
The Hypocondriac
Darkness Being
Huge Shadow

Lock birds on cages so she can hear them singing all day (partially succeeded, but then failed).

Agnes is a major antagonist in Monica's Gang and Monica Teen.

She is an introvert, unsympathetic, and socially awkard girl who lives in the Pitanga Tree district. She lives with her parents's ghosts, who are the reason of her nature, a terrible person who often harm animals for her own fun and entertainment, which causes an extremly bad fame, as any kid or animal who hear her name are insatantly terrified.

In Monica Teen, it's revealed that Agnes died in a young age, but her spirit was still trapped on Earth, turned into a shadow demon, because of the hatred in her heart, just like her parents, and she was eventually invoked by Penha, who needed her help to get revenge on the gang.

Agnes was always a evil and mean person, because of the education her parents gave her, constantly saying that happiness and friendship are bad things that only lead to sadness. Since they were part of Asclepio's House, an evil organization who seeks to educate and organize the world, at their own image. Agnes lived in the Inverse Tower, a magical building created to be an orphanage, but in fact, it was a place the organization used to educate children in their own twisted principles. Her only friend there was Boris, an orphan boy, mean as her. They constantly bullied a boy named Feitoso, and hey nicknamed him "Captain Fray".

One day, after Feitoso made a deal with a demonical being, and thee latter send a lot of insects to spy him, so he would never tell anyone. The diseases the insects bring, however, endangered people at the orphanage, including Agnes's parents, who were sickened, and died. After that, Agnes started to act with even more evil and hatred in her heart, gained an intense fear to illness, and started to live in an abandoned house, with her parents ghosts, who continued to give her a ruthless and severe treatment that made up her personality.

Agnes only had two friends, Penha and Sofia, two another evil from the Pitanga Tree district, as they formed the Pitanga Tree Girls. She first met the gang when Monica and Maggy were going to an ice cream shop in the Pitanga Tree district, and saw her. They witnessed a bird getting scared and flying away from her as soon as it saw her face, the first time the gang saw how tenebrous she is. Late in that day, Penha and Sofia teamed up to bully Monica and Maggy, and kick them out from their district. Agnes however, ran away from Maggy as soon as she saw her cat's fur falling out of her, as she though that she was allergic to it.

Her next appearance was in "The Missing Birds", where Maggy and her cousin Junior, discovered Agnes's sadistic hobby of locking birds on cages to make them sing to her. They broke into Agnes's house to try to save them. When she found Maggy she locked her on a cage. There, she reveals her parents death and that she lives with their ghosts. However, when Maggy escaped and was going to have dinner in her house, dozens of birds appeared and attacked Agnes and her parents, as Junior revealed that he saved them, and then Agnes was defeated for the second time.

In "Little Shadows from the Past", Agnes's kidnap Maggy's cat, Vanilla, what makes Maggy, Denise and Monica into breaking in her house again to rescue him. While Monica and Denise, both disguised as the owner of the city's beauty saloon, distracted Agnes, Maggy tried to find Vanilla. Denise made Agnes look beautiful, much to the latter's surprise and joy. When Maggy, running with Vanilla, told them to run, they took off their disguise and ran. He parents, however, appeared and trapped them with their shapeshifting abilities. Monica, with her super strength, "kicked their asses", and they broke free, only to see a big cage falling into them, an trap activated by Agnes. Maggy talked to Agnes and made her realize that she does not have to do what her parents want her to do, and she can be a good person if she wants. Her father, however, woke up and grounded her, saying exactly the opposite of what Maggy just said, making her sad. Denise broke free of Agnes's parents trap, as she throw Vanilla on them, making them horrified of the later's fur, as they're just as fearful of illness as their daughter. Agnes appear in the end of the history, looking to the girls from a window, vowing revenge against them and losing the very last good that existed in her heart. 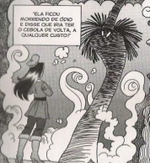 Agnes serves as the secondary antagonist of the Shadows from the Past arc of Monica Teen. Here, it's revealed that she died prior to the events of the series, and that her ghost and presence were still trapped on Earth due to her purely heart made of pure darkness. She first appears tormenting Monica's dreams in the form of different nightmares, involving an old house and lots of cages, elements from her past. This is because she was invoked by Penha, to contribute in the latter's plan to take revenge on the gang for everything that happened when they were kids, especially on Monica. Agnes served as Penha's bodyguard and the muscles of the duo. When Monica contacts a paranormal witch, Madam Creuzodete, to discover what is making her nightmares, Agnes appears, attacks Creuzodete, and prevents her from saying to Monica what is the true nature of her nightmares. Monica and Denise goes to the house in Monica's dreams, Agnes old house. There, Agnes attack them but they manage to escape.

This was intentional, as Penha makes up a video showing Monica breaking in the house with no apparent meaning (Agnes does not appear in the video) that could incriminate Monica, uses it to blackmail Jim Five, and make up a fake affair beetween her and Jim. During a party, Jim and Monica break into Penha's office and attempts to use a virus to destroy the video, with Sofia blocking the door, to not let Penha enter. Penha however, uses her Scorn Glare on Sofia, which makes her kick the floor, cracks it and is knocked down. Penha calls Agnes, who trap Jim and Monica with her tentacles. Penha enters the room with Paulette and mocks Monica, asking Paulette to put the video on the big screen. Paulette, who reveals to be Denise in a disguise, however, puts another video, one that shows Penha confessing her plan to Monica and demonstratiting how bad she is. Enraged, Penha order Agnes to kill everybody, which she'll gladly do, starting with Monica, but not before she says her last words. Monica orders everybody to attack, and a lot of magical creatures who Agnes bullied as ghost appeared, led by Angelo, the gang's guardian angel, who reveals himself to be Monica's backup plan. He says that Agnes is an aberration, who doesn't want to accept that her time in that world is over. She attacks him, saying that Earth is her place, but he says that she doesn't have a choice, and uses his divine power to banish her to the undead realm, where she will be judged to go to Heaven or to Hell. She is never seen again, and she's problaby aching forever in Hell.

Agnes is a tall, slender, light skinned young-teenager girl, with blond hair and black eyes. She usually wears a pink/purple coat and tap, and a green scarf, due to her being extremely afraid of getting sick.

As a ghost, Agnes is still slender and tall, but with black skin and a demonic desing. She has sharp teeth and claws, tentacles in her back and in her feet, and some spikes around her neck that resembles her scarf.

Due to the horrible education it was given to her by her parents, Agnes is a cold hearted abuser, who harm and encage animals (mostly birds) for her own sadistic pleasure, by forcing them to sing to her. She doesn't like social contact (exceptfor her friends, Penha and Sofia) and will do anything to avoid it. She's not a scary cat however, and can be brute and wrathful to others. Her heart became so dark, to a point where her soul couldn't go to the afterlife, and she was still on Earth, even after her death. As a ghost, Agnes is a vengeful, blood thirsty monster, who will do anything to help Penha in her plan to make the gang suffer as much as possible.

Fear Inducement: Because of her bad fame, she can scary away almost any animal or kid who crosses her way, without even doing nothing. Trap Proficiency: She is shown to have experience in using different types of traps, like capture nets, and having big cages that fall from the cell her own house. She often uses these skills to capture animals, mostly birds, and bring them to her house to do some evil things to them.

Shapeshifting: She can shapeshift, despite this ability only being shown when she changes between her disguised form, and her true form as a ghost. Tentacles: In her true form she has extensible tentacles, that she uses to trap and hold people Sharp Teeth/Claws: She has dangerous sharp teeth and claws in her true form, despite not being exactly used on the history, this is possibly the way she would the people in the party. Super Strength: She can easily hold people up, and attacks Angelo with such force that it actually hurts him, despite being an angel. Nightmare Manipulation: She was able to invade Monica's mind and create terrible nightmares while her sleep, with the objective of making her go to Agnes's own abandoned house and contributes to Penha's plan.