Fanatical Pawns
The Agnese Forces (in Japanese: アニェーゼ部隊) is a paramilitary organization led by Agnese Sanctis and is the main antagonist faction of the Orsola Aquinas Rescue Arc of A Certain Magical Index. It is an organization comprised of powerful magicians and battle nuns who serve on behalf of the Roman Orthodox Church by eliminating all of their enemies. Following the events of September 8 and the Adriatic Sea Battle, Agnese Forces eventually reforms and joins Necessarius of the English Puritan Church as representatives of the Roman Catholic Faith in England. After World War III had ended, they once again returned to the authority of the Roman Orthodox Church.

Agnese Forces were created at an unknown point in time, but they were made up of orphans ran by the Roman Church. The church had apointed Agnese Sanctis as the leader of the unit despite her younh age, most likely because of her leadership abilities and the fact that the nuns follow their leader no matter what.

The Agnese Forces obeys the direct orders and wills of the Roman Orthodox Church and adhear strictly towards Roman Catholicism. Despite their devotion to the Catholic Faith, the group's leader is what keeps them together and her orders are always carryed out no matter what. Agnese often uses it to her advantage as she always manipulates her subordinates orders and wills to serve her own purpose and advantages. Agnese often manipulates others like Touma and Index to find and capture Orsola Aquinas and she often bends others to blindly follow the dogma of the Roman Church whether they're members of the church or not. The Agnese Forces also follow the dogma of their leader, Agnese, who bends the wills of her subordinates to suit her needs such as stabbing out their ears to they couldn't be affected by Index's Sheol Fear.

The organization's actions are based around those of Agnese, but her actions are based purely on doubts rather than faith. An example is when during the battle between Agnese Forces and the Amakusa Christian Church, the forces doubted that they'd win and so they were able to be defeated as a result. After the events of the Battle of the Adriatic Sea, the organization has reformed and its members are now more layback and carefree then before. They still obey Agnese, but she's since then redeemed herself and is less dogmatic than before.

Members of the Agnese Forces are Battle Nuns, nuns of the Roman orthodox Church who often engage in battle and reinforce church dominance over the world and the magic side. They use weapons such as swords, polearms, giant crosses, tortches, and other medieval era weaponry. Due to the large number of members within the unit, Agnese Forces often does things like find information, launch investigations, prosecute and kill enemeis if necessary, and heal the injured due to their large size of 250 members. It's assumed that the Agnese Forces is used by the Roman Orthodox Church to conduct their operations and that they don't have to take responsibility when word gets out.

The nuns report directly to Agnese Sanctis though, they can split up into multiple groups due to their large size and will take orders from people like Lucia who's the second-in-command of the organization. The nuns were under the direct control of the Vatican and Vatican representatives would often be sent to monitor their actions and punish them like Bishop Biagio Busoni following the Orsola Church Battle. After joining Necessarius, Agnese Forces was relieved of Vatican control until the end of World War III but javen't been deployed since then. 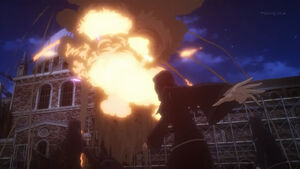 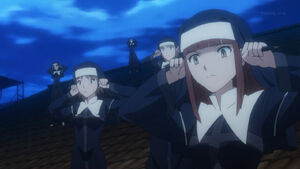 Retrieved from "https://villains.fandom.com/wiki/Agnese_Forces?oldid=3344424"
Community content is available under CC-BY-SA unless otherwise noted.