Figurehead of the Deadmans

Revive and be accepted by Giff (formerly).
Be killed by Sakura (formerly).
Find a place to belong.

Aguilera is the figurehead of the demon-worshipping cult known as the Deadmans and a major antagonist in Kamen Rider Revice, the third series of the Reiwa Era of the Kamen Rider franchise. She is the psychotic fiancee of the ancestor of all demons, Giff, and seeks to revive him in order to spread chaos throughout the Earth.

When disguised as a civilian, Aguilera uses the identity of Hana Natsuki.

It is later revealed Aguilera is actually a puppet ruler and her true purpose is to be the sixth sacrifice needed to revive Giff. She later uses the Queen Bee Vistamp to become the Queen Bee Deadman.

She is portrayed by Yui Asakura.

From a young age, Aguilera was indoctrinated into the Deadmans and raised by them. As a child, she was selected by Giff to be his "fiancee" and spent her life being groomed to be his bride. As an adult, she was used by the Deadmans as a puppet to rally people behind, while Olteca and others in the Deadmans handled the cult's affairs. While told she would be Giff's sacrifice, unbeknownst to her, she was actually intended to be the sixth sacrifice needed to revive Giff.

Even when she learned the truth, Aguilera chose to go forward with the sacrificial ritual out of her love for Giff. However, the ritual was interrupted by the Kamen Riders and the Deadmans Base was destroyed, leading Aguilera to become the Queen Bee Deadman in a fury to get revenge. Having been used as a pawn by Olteca, Aguilera left the Deadmans with Julio to begin working to revive Giff on her own terms.

After being saved by Sakura and having her Deadman contract nullified, Aguilera became a member of Weekend.

After joining Weekend, Hana Natsuki wears a black jacket along with an orange scarf with a black "W" pattern and white thigh-high boots.

Aguilera appeared as a beautiful and cute woman in her seemingly early-20s. She wears a beautiful red sleeveless dress that tends to be used by Flamenco Dancers, along with ankle-high boots.

As Giff's bride, Aguilera wears a red wedding dress with plumes resembling roses, as well as a pair of maroon gloves and red high heels. She also wears a red bow in her hair.

Aguilera is shown to be a cheerful girl in all situations, whether it be while she's holding a ceremony in the Deadmans Base or when she's leading an attack against Fenix. Her cheerfulness highlights her cruel personality underneath due to the fact that she has no hesitations to bring chaos across Earth once she revives her fiancee from his slumber. Because she is the fiancee of Giff, it is shown she has an obsession towards him and reviving him. She does seem to love him to a certain degree after expressing her feelings that she truly misses him at the end of Episode 1 as she has an intention to revive him from the slumber so that they could be together. During Episode 2, it was shown that she is rather confused about her origins were and what her true nature is as shown when she talked to her fiancee. She is also shown to be very protective of Giff's casket and gets furious whenever someone touches it.

After Giff was seemingly destroyed in the destruction of the Deadmans Base, Aguilera becomes much more frantic and furious. She is prone to wrathful outbursts. However, she becomes more and more depressed after her position as the leader of Deadman have lost, refusing to working for others. Aguilera however does have kindness within her, as she is the one who brought Go Tamaki into Deadman when he was at his lowest, and she asked Sakura to protect him after his contract got nullified. She has shown an odd attachment toward Sakura and enjoys fighting her, wishing for her to be the one to kill her.

After having her Deadmans contract voided by Sakura, Aguilera joins the Deadmans and becomes much nicer. She begins using her civilian alias "Hana Natsuki" as her real name and was initially ashamed of her past as the Deadmans' queen of evil, until Masumi Karizaki encouraged her to take pride in her past and gave her the attuned Queen Bee Vistamp to become a Kamen Rider. 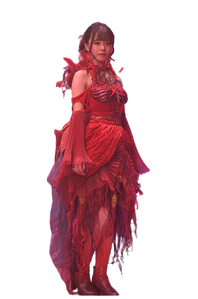 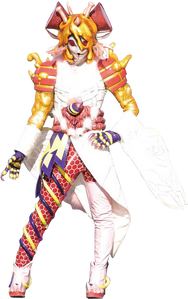