Aguilla Beckersted is one of the two main antagonists of the 1986 comedy film One Crazy Summer.

Aguilla Beckersted is a wealthy man who lives on the island of Nantucket with his son Teddy and Aquilla's father lives at Nantucket, too. Aguilla owns a restaurant chain called "Lobster Log" and has plans to build another one on the site where Mr. Eldridge has a house where he takes care of people there. Cassandra Eldridge, who is the granddaughter of Mr. Eldridge, now owns the house has to pay the $3000 mortgage on the house by a certain date. Aguilla came to talk to Teddy while he was doing his laps in the pool. Aqguilla grabs Teddy by the ear whenever he needs Teddy's attention. Aguilla tells Teddy about the regatta coming up soon and and he better win it or otherwise his dad will take away everything they own and tells Teddy that no more Ferrari, no more pool and Teddy will have to go to "work", a word Teddy hates. Teddy tells him that if Cassandra does not come up with the money, he gets the house.

Aguilla plans not only to build another Lobster Log, but plans to build Beckersted Etates, condominiums near the site of the Eldridge house. Aguilla has a reception at his house for the upcoming development with Teddy there and the bank president Chrong Freen. Aguilla has a talk with Teddy about Cassandra's performing at the Dew Drop Inn and try to make plans to stop her from singing cause she will make money. Aguilla manages to forclose on the Eldridge house. At the house, he sees Cassandra, a long with Hoops McCann, George Calamari with his sister Squid and her dog Boscoe. He would tell them that the house is now his and "get this ugly mutt off my property" and kicks Boscoe.

Leter on, the regatta is going on and Teddy, along with his friends would race the team of Hoops McCann, George Calamari, Clay and Egg Stork, and Ack Ack Raymond. There are others in the race, too. Aguilla would stow away aboard Teddy's boat and would use his crossbow to take out the mast. Hoops manages to get it repaired. Aguilla has Teddy take out the Australian boat, which the nmast gets damaged and causes one of the crew to fall into the ocean, but is saved by Ack Ack. Aguilla tries to take out Hoops's boat but is stopped when Squid, who is using the mechanical dolphin from the "Foam II" movie set and gets Aguilla for what he did to Boscoe. Aguilla shouting for help. Teddy loses the race Hoops and his friends celebrate the victory—they are awarded the prize, Squid's dog turns out okay (after giving birth to puppies), George hooks up with Cookie, and Ack-Ack wins his stern father’s approval for his heroics. Despite winning, Hoops offers the prize to Teddy if he spares Cassandra's house, but Teddy immediately backs out on his promise. However, Old Man Beckersted gives back the prize and spares Cassandra's house, stating he wasn't going to "put a dime" in the Beckersted Estates, before dragging Teddy away by his ear. 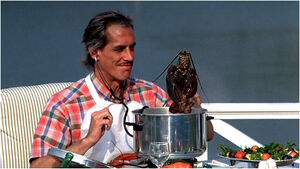 Aguilla about to cook a lobster. 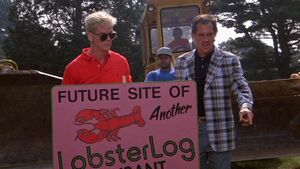 Aguilla about to take over the Eldridge land. 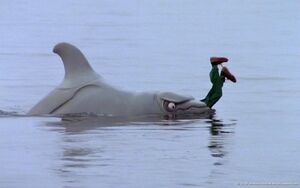 Aguilla in the mouth of the "giant dolphin with rabies".
Add a photo to this gallery
Retrieved from "https://villains.fandom.com/wiki/Aguilla_Beckersted?oldid=4034836"
Community content is available under CC-BY-SA unless otherwise noted.