Colonel of the Mexican Army

Have John Marston participate in the Mexican Revolution.

With the addition of the Liars and Cheats DLC pack, Colonel Allende is also a Multiplayer character model that may be selected in the 'Damnation' section of the Outfitter.

He was voiced by Gary Carlos Cervantes in motion capture.

Little is known about Agustin's past. It is known that he was born into a peasant family in Mexico and he lived quite poorly. Unknown prior to or during the army, he became an idealist, but he ultimately became a violent cynic, eventually enlisting in the army, where he rose to the rank of colonel. Then, either for military merit or for some other reason, he was able to become governor of Nuevo Paraiso.

He began to live in the luxurious and upscale fortified mansion of Escalera, which was convenient for him, since he could monitor his city without leaving the mansion and without putting himself in danger. In addition, Agustin became a corrupt and brutal dictator who not only suppressed any uprisings, but also made citizens poor and hungry.

He then provides defense to Javier Escuella and Bill Williamson, members of John Marston's gang.

Currently, Agustin is dating John, who has arrived in Mexico for Bill and Javier. Agustin decides to use him to destroy the rogue led by Abraham Reyes and promises to help him find Escuella and Williamson.Agustin sends John on various missions, along with his entourage Captain Vincente De Santa de Santa and Captain Espinoza, to eliminate the rebels and capture the women for his personal pleasure.

Agustin then decides to get rid of John by ambushing him. He meets with him and informs him that he managed to capture Escuella and Williamson and they are in the church. However, when Zhdon arrived there, he was seized by De Santa, who, on the orders of Agustin, intends to execute Marston. However, the execution fails as Reyes arrives on time with the rebels and rescues John. De Sante escapes, and Espinoza is killed along with his men at the hands of John and Reyes.

Then dark times come for Agustin. John, joining the rebels, helps them fight Agustin's troops, while Reyes promises John to find Escuella and Williamson. After completing various missions and destroying Agustin's troops, John is in the process of finding and killing De Sante and captures / kills Escuella. John then, with the support of the rebels, attacks Agustin's mansion. Agustin, seeing that he has lost the war, escapes with Williamson into an armored stagecoach. But Marston and Reyes, on horses, catch up with them. They kill all the guards and the stagecoach driver. Realizing that he has lost, Agustin pins Williamson to the ground, and tries to convince John and Reyes to save his life by giving John Williamson,and to Reyes that he would flee the country. However, in the end, he, along with Williamson, kill either John or Reyes, ending Agustin's dictatorship. 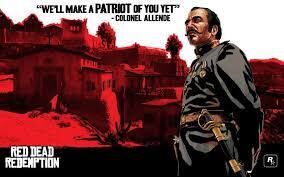 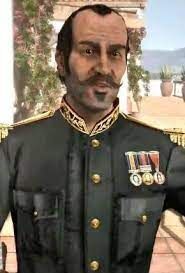 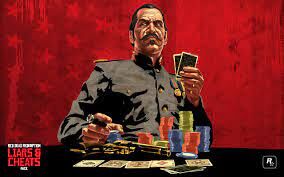 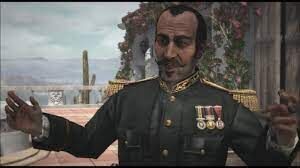