Lord of the Mayan Underworld

Searching for corpses for his army.

Fill the Nine Hells with all of the souls on Earth, including other gods.

Eradicate all life on Earth.

Ah Puch is a playable antagonist in the MOBA Smite. He is the Mayan god of death, darkness, and disaster. He is the lord of the ninth hell, the lowest and most horrible of them all, and king of the Mayan Underworld.

Deep within the earth lays the many hells beneath it, hope to the tortured souls inside it, evil creatures, and at the ninth and bottom most hell, Ah Puch himself. Ah Puch is a sadistic, nightmarish figure, stalking the night to drag unlucky humans to the underworld, so he can torture their corpses. The only people he spares are those already suffering from his servant's effects. Ah Puch even desires to drag the other deities into his hell, so he can be able to torture them for all eternity.

Ah Puch's abilities center around his deadly magical prowess over corpses. He can revive corpses to serve his bidding with Undead Surge, make them explode with Corpse Explosion, use Hollow Ground when over them to lower the cooldown for the former move and restore some of his health/mana, enhance the strength of one of his corpse minions with Fleeting Breath, and summon a fury of wraiths with Empty the Crypts.

Ah Puch haves a great wish for dragging souls into his domain. As it shows in his vocal lines, Ah Puch is not only selfish, but also psychopathic, narcissistic, megalomaniacal, and probably has a God Complex (This last fact is not so strange since he is truly a god, but he shows to enjoy his persona too much), as he speaks of himself in the third person, or calling himself "master", and speak of his zombies (and sometimes his other ally gods as well) as "servants" or "minions". He is shown to be very nihilistic, sadistic, and cruel. Although he wants to expand his army of "minions", he doesn't really care about them and only uses them for his own profit. The same feelings can be applied to his allies, since his command of "Sorry", which usually is used when someone of the team dies, Ah Puch using the same command only says "A pity." Besides all these traits, he seems to actually believe that his doings are righteousness only because of his god condition. 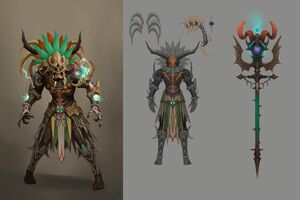 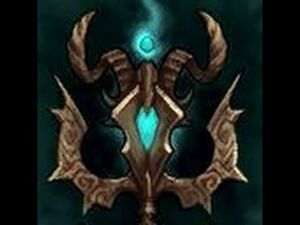 One of Ah Puch's zombies.

One of Ah Puch's wraiths. 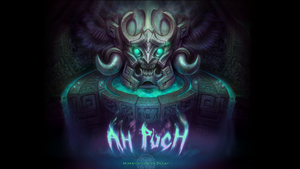 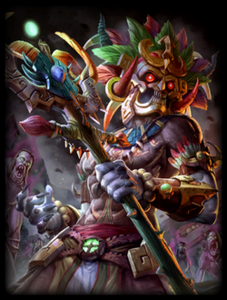 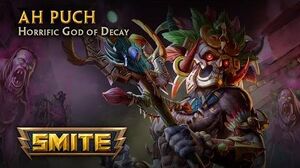