Continue to rule Balbadd as king

He was voiced by Kōki Miyata in the Japanese version, and Sam Riegel in the English dubbed version.

Ahbmad was a very selfish and sadistic ruler who never had any care for the people of his country. He only cared about staying prosperous and rich in his monarchy even if it means that his own people had to suffer. In fact, he devised a plan to sell his own citizens to slave traders as a way to help the economy of Balbadd. As a monarch, he thinks of himself as the most important thing in his country and sees all of the citizens below him as useless trash. He even views his brother, Alibaba Saluja, as disgusting trash because he came from the slums and on numerous times ignored the latter's pleas to save the citizens. Most of the times he can get annoyed at Alibaba and would desire for him to die since he is a hindrance to him. When his younger brother, Sahbmad Saluja, tried to reason with him to tell him what he was doing was wrong, Ahbmad did not take him seriously. However, when Sahbmad continued with a coup d'etat, Ahbmad wanted him dead for interfering with his way of ruling Balbadd.

After losing his position as king, Ahbmad was initially angry but after the events of the Fog Troupe invasion and meeting their father in spirit, Ahbmad began to think over his actions. As an archaeologist at the Torran village, Ahbmad is overall blunt but has lost his egotistical personality as he is interested in studying the Torran culture.

Ahbmad was a part of the Saluja monarchy that ruled over Balbadd. After his father's death he inheritted the thrown as the new king of Balbadd. Over time, Balbadd's social classes have been splitting apart rapidly because of Ahbmad's despotic rule and Markkio's influence. As the ruler of Balbadd, Ahbmad began to sell his citizens off as slaves to boost up the economy.

Ahbmad first appears in a meeting with Sinbad discussing how to deal with the Fog Troupe. Ahbmad states that his overall solution to the problems in Balbadd was to raise the tax. He later reappears in his palace where he decides to hear out Alibaba's pleas on helping his citizens but ignored him and ordered his men to remove him from the palace as he does not want to listen to trash from the slums.

As Alibaba storms into the palace to force Ahbmad to stop what he was doing, Ahbmad decides to unleash the men from the Kou Empire to eliminate him. After defeating the men, Alibaba proceeds to negotiate with Ahbmad's men and everyone else to try to remove Ahbmad from his position as king. After some quarreling among his men and even his brother, Sahbmad Saluja, everyone there decide to evict Ahbmad from his position on the thrown. After negotiating with Kougyoku Ren, a princess of the Kou Empire, it was now decided that the monarchy system in Balbadd was going to get removed which prevent Ahbmad from marrying the princess (since he is no longer a king). When the Fog Troupe invaded the palace, Kassim and his men were attempting to kill Ahbmad, Sahbmad, and anyone else who supported the royalty even though it does not exist anymore. When the Fog Troupe invasion was over, Ahbmad was later seen with his brother, Sahbmad, politely acknowledging the spirit of their father.

Since the Kou Empire took control of Balbadd and since the monarchy system was abolished, Ahbmad along with his brother and the rest of their family were exiled from Balbadd. At this time, Ahbmad has been thinking over his past actions.

Ahbmad and Sahbmad are now archaeologists who studies the Torran culture on Torran island. Ahbmad helped pay for the Alibaba and Hakuryuu's items since he understands the language from the children. Alibaba thanked him but Ahbmad admits that it was nothing as this is what he can now do. 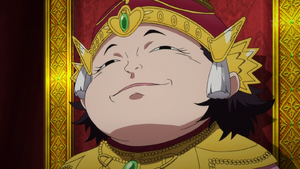 Ahbmad Saluja in the anime.