Ahri, also known as The Nine-Tailed Fox, is a villainous playable assassin character and mascot of the multiplayer online battle arena game League of Legends.

A Vastaya, Ahri has the unique ability to turn magic and life essence into orbs of raw energy and mainly uses these powers to manipulate other's emotions before devouring their life-force.

The 89th champion added in the game, Ahri was released on December 14, 2011, and is most commonly played in the mid lane.

She is voiced by Laura Post, who also voiced Queen Azshara in World of Warcraft, Harley Quinn in Batman: The Enemy Within, and Ragyō Kiryūin in Kill la Kill.

Ahri has long dark brown hair and a pair of amber eyes that change color to aquamarine blue upon collecting a soul. She appears to be in her mid twenties, but is actually around forty years of age. Despite her young looks, her voice is mature and slightly deep. Her ears are a darker shade of grey and her nine tails are a cool shade of white going from darker grey to whiter tones. She appears in elegant oriental-type clothing.

Ahri was abandoned by her original family in the snowy woods of northern Ionia, with the only thing they leave for Ahri were two gemstones. Joining a group of ice foxes for their own family, she learned her own magic (Be it to soothe others to not have a fight or more powerful blasts) and quick reflexes.

Ahri first encountered humans through a camp of soldiers, watching them from a distance and growing attacked in a hunter among the group. Upon an arrow piercing him and causing him to perish, Ahri absorbed the dying man's life force and emotions. Ever since then, she became transfixed on it, seeking out prey to toy with before consuming their life-force across Ionia.

Through this life force, she saw their lives and learned of their history as they laid dying, and grew remorseful over her actions. She tried to only do small bits of life force between times at first, but she soon fell victim to her urges and devoured the essence of everyone in a village. Feeling an immense sense of guilt, Ahri banished herself for some time, before returning to experience the world on her own and seek other beings like her. She may devour bits of the essence, but she chose not to use them to kill others in that manner.

In-game, Ahri is a burst-type champion, burning down her opponents with powerful spells. Her passive, Vastayan Grace, increases her movement speed if she hits an enemy twice. She can deal with magic damage using Orb of Deception, and blast fox-fires at enemies with Fox-Fire. Ahri can also Charm enemies by blowing a kiss to them, as they temporarily lose control of their own movement. Ahri's ultimate, Spirit Rush, lets her dash forward three times whilst firing essence bolts at her opponents.

Ahri could be self-centered and often thought only about herself and her own interests but she is generally a calm woman. She enjoys learning new things and seems to find satisfaction in her crimes. She doesn't fully depend on her predator instincts as she is shown feeling some empathy towards her prey, especially after killing her lover out of a pure thirst for his soul.

Ahri in "Garden of Forgetting". 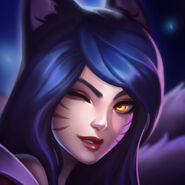 A portrait of Ahri. 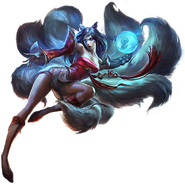