Start a Wiki
The Ahuizotl (or Ahuitzotl) is a legendary creature in Aztec mythology.

It was described as dog-like, with hands capable of manipulation and an additional hand on its tail. The ahuizotl was feared due to its liking for human flesh, especially nails, eyes, and teeth. It was said to live in or near the water and uses the hand on the end of its tail to snatch its prey.

The ahuizotl included within Book 11 of the Florentine Codex, which describes it as: 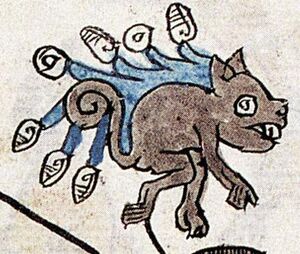 Retrieved from "https://villains.fandom.com/wiki/Ahuizotl_(mythology)?oldid=3355205"
Community content is available under CC-BY-SA unless otherwise noted.