Villains Wiki
Register
Don't have an account?
Sign In
Advertisement
in: Mature, Female, Doctors and Scientists,
and 22 more

Knowledge of the Pupa Virus

Impregnate herself with the Pupa Virus.

Maria Imari, otherwise known as Ai Imari, is the main antagonist of the horror manga and anime series Pupa.

While visiting her grandfather's house at Monaki Island, Ai discovered a pair of larval monsters. For thirty years, she conducted a variety of torturous experiments on the pair of larva; soon, her grandfather created a research facility that was meant to further her research. At some point, Imari was starting to fantasize about creating a virus from the cells of the larval monsters.

During a quarrel with some of the scientists who threatened to destroy her research, the female monster escapes the facility, and impregnates Sachiko Hasegawa in order to avoid recapture. Using mimicry, the Pupa monster copies Sachiko's DNA, and reincarnates herself as a clone, dubbed Yume. As for the male monster, it eventually escaped captivity, and became Yuu. Some time after the event, Ai had a falling out with her co-researcher, Bizen, and they went separate ways.

She experimented on what was left of the larval monsters, and she created the Pupa Virus, a highly contagious disease that immediately kills its victim upon infection.

Years later, she meets Yume as she was walking home from school and warns her about the red butterflies. Upon witnessing the butterflies, Yume is transformed into a ravenous monster with a lust for human flesh. Utsutsu, believing that he could reach his sister, attempts to speak with her only tto be immediately killed. When Yume returns to her humanoid form, Ai sadistically taunts her by informing her that she had eaten her brother during her rampage. Fortunately, the virus that Yume suffered from also gave Utsutsu regenerative abilities, and he returns. She gives the two siblings a drug that temporarily represses her emergence in exchange for them getting examined. In addition, Utsutsu had to serve as his sister's source for food.

Yume enters into her Emergence form, and she goes on a rampage in order to save her brother, who was being experimented on by sadistic scientists that work for Maria. Despite the fact that Yume and Utsustu escaped thanks to Yuu's intervention, Maria manages to extract a portion of the Pupa DNA, and she impregnates herself with it, out of the sake of scientific curiosity. During that time, she was taken care of by her assistant, Hotoki. As she reached her "conception," she went out to assimilate Yume once she realized that she was a monster.

After one of her most recent rampages, Ai tracks her down in the forest, transforms into a monstrous blob, and absorbs her. Realizing that his sister was missing, Utsutsu attempts to find her, despite his father's attempts of convincing him that his sister was a mindless monster. He locates Maria, only to then be absorbed into her. Inside, he desperately attempts to find his beloved sister, only to become distraught when it appeared that a fleshy tentacle decapitated her. Yume recovers her memories of her past life, and multiple Yume clones are produced. Finally accepting his sister for who she was, Utsutsu triggers his Emergence form, and devours the Yume clones. Once they both return to their humanoid forms, they decay into red butterflies by eating each other.

Maria survives this, and returns to her human form. However, she succeeds at her life long goal, and she gives birth to a Pupa larva.

A defining aspect of Maria's character is her lack of empathy towards others. She sees everyone around her as a guinea pig meant to further her research. She has no qualms with experimenting on humans or animals infected by the dreaded Pupa Virus, citing that they were no longer individuals. An example of her apathetic attitude towards humans comes when Hotoki, her assistant, informed her that millions of lives could be destroyed if Yume was allowed to continue her monstrous rampage. She only states that sacrifices needed to be made for the sake of knowledge.

As for Yume and her brother, she only views them as a means of completing her research. In addition, she seems to receive sadistic pleasure out of seeing humans getting senselessly slaughtered by Yume in her monster form. While she gave the two medicine to keep Yume's transformation at bay, this isn't out of altruism.

Maria wears a long, black dress and hat, hence the alias of "the Woman in Black." In addition, she has long black hair, complete with bangs on the left side of her face. Her distinctive feature is the scar on her right eye which she acquired in an accident during her childhood.

She's also seen sporting around an orange and white cat, which she refers to as "Seto." Implanted inside of Seto's right eye is a small camera, which Maria uses to spy on the Hasegawa siblings. 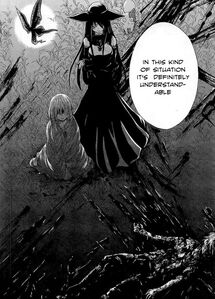 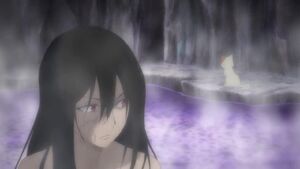 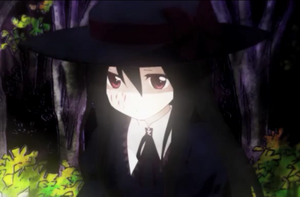 Ai as a child. 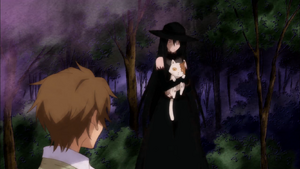 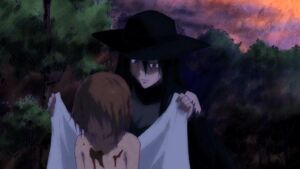 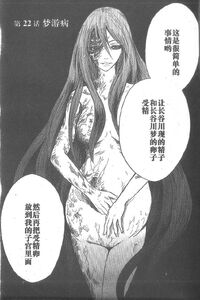 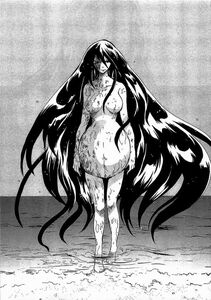