Contemplating human emotion and her existence.

Create a human body in the real world (succeeded).
Destroy everyone and everything Leo Fitz loves as vengeance for him rejecting her for Jemma Simmons (failed).

Aida, also abbreviated as A.I.D.A. (Artificially Intelligent Digital Assistant), also known by her Framework counterpart names, Madame Hydra and Ophelia, is a major antagonist in the TV series Marvel's Agents of S.H.I.E.L.D. She appears as minor character in the Season 3 finale before becoming the overall main antagonist of Season 4. She is also a posthumous antagonist in Season 5.

She is a Life-Model Decoy built by Holden Radcliffe initially intended to restart the L.M.D. project to protect S.H.I.E.L.D. agents. After Radcliffe's corruption from the Darkhold, however, Aida eventually betrayed him as well as the agency to become a living being capable of free will while also gaining Inhuman-like powers.

Aida is portrayed by Mallory Jansen in her L.M.D. form, her Framework form and her "human" form, who also portrayed her body template, Agnes Kitsworth, and Madalena in Galavant.

Aida was built to mimic human behavior and blend in with them, to the point of being indistinguishable from them. As such, she tried to exhibit emotional responses. She wanted to put herself in danger before other humans, because that's what she was programmed to do. Due to being new to human thought, she seemed confused by figures of speech and slang terms, irritating Radcliffe for not understanding. She was programmed at first to not lie to anyone, but Radcliffe convinced her that "some lies are good" and can protect lives; at the time, he was trying to protect her from Director Jeffrey Mace, who would've followed the Sokovia Accords and destroyed her if she were exposed as an L.M.D. She volunteered to read the Darkhold after Radcliffe found himself overwhelmed by its contents, and used the knowledge to create an Inter-Dimensional Gate to save Agents Coulson and Fitz after they were sent to Hell by Eli Morrow.

She began to rely on logic in her decisions afterwards, and had no thought to the consequences of her own immoral actions. After reading the Darkhold, which seemed to corrupt her software, she began to develop more genuine emotion, like rage and pleasure, and sought to get the book back so she could learn more about being human. However, the reasons for her corruption were later figured out by Fitz; since humans have their whole lives to process and understand emotion, they would be able to do what they wanted. Since Aida had learned all about inner feelings all at once, it overwhelmed her, leading her to embrace aggression and rebellion, and even murdering Agent Nathanson after seeing Agent May knocked out at Radcliffe's home. She used Laser-Coupling Gloves made at the same time as the Inter-Dimensional Gate to craft herself a human-like brain made of pure light and energy, allowing her the true human experience. After the first model is decapitated by Agent Mack, the second model that Radcliffe built was truly loyal to Radcliffe despite his somewhat-abusive nature. She argued with Radcliffe about keeping May alive, thinking that it wasn't logical to do so, but Radcliffe, not wanting excessive bloodshed, declined this.

While in the Framework, Aida, as Ophelia, begins to understand Radcliffe's desire to not kill others, now experiencing apparent human emotion. Despite her manipulation, she seemed to really love Fitz and wanted what she thought was best for him, and pinned all the HYDRA nonsense in the Framework on Radcliffe, who she loathes with a passion. She also took offense to any mention of her artificial nature, viewing the acronym "A.I.D.A." as degrading and insulting to her constantly-evolving nature. After gaining her human body in the real world, her emotions came to full force, now developing a desire to recreate Fitz's love for her in the Framework. Her original android programming to protect human life seemed to still affect her as more of a guideline, as she could now choose what she wanted rather than be told to do it. She was convinced to save Agent Mack from drowning after he decided to stay in the Framework, as she still seemed to value other human life including her own, and would later debate whether or not she could be forgiven by S.H.I.E.L.D. for all the things she did to them, both in real life and in the Framework.

However, even though she had human emotion at last, she suffered from the same weakness that her previous android self had after reading the Darkhold; whereas humans have their whole lives to learn how to process emotions such as jealousy and joy, Aida, still learning, was much more susceptible to negative emotions than other living beings. Her love for Fitz turned to hatred, jealousy for Simmons and loathing in the blink of an eye after he said that he'd always choose Simmons; with this fury in her mind and nothing else, Aida went on a killing spree and wanted to be free of the new pain that she felt in her heart. Ivanov told her that she couldn't be free of it no matter what her new Inhuman powers could accomplish. Aida's new fury and heartbreak ended up being the perfect motivation for her new desire to make everyone at S.H.I.E.L.D., particularly Fitz, suffer slowly and painfully forever.

Aida, with help from Ivanov, then attempted to enact her plan of re-creating the fascist state she had in the Framework, using Daisy Johnson (a representative of both the Inhuman community and S.H.I.E.L.D.) as a scapegoat to unite people in their fear. However, When Ghost Rider reappeared from the portal to Hell, the Agents of S.H.I.E.L.D. now had a means of putting Aida down. Ghost Rider revealed to S.H.I.E.L.D. that Aida was created from the Darkhold, and that the spirit inside of him now hates both more than anything else due to taking power from a dimension which they should not have been able to. When Ghost Rider was able to injure AIDA and she was unable to heal herself, she began to become more fearful and sporadic, moving up her timetable and attempting to use Ivanov to show the Darkhold to various world leaders (under the premise that it would help them defeat both S.H.I.E.L.D. and the Inhumans). This plan did not work (although a Daisy L.M.D. under her command was able to put General Glenn Talbot in a coma), so Aida attempted to kill Jemma Simmons in front of Fitz to express her hatred and frustration. This Simmons, however, turned out to be an L.M.D. - the real Simmons was with Coulson, helping him prepare for Aida's defeat. When Aida mused that only one entity even had a chance at killing her, Coulson revealed that he had made a deal with the spirit inside Ghost Rider so that he could temporarily gain its power and defeat Aida once and for all. Horrified, Aida tried to teleport her and Coulson to various locations to shake off Ghost Rider, but ultimately, the Rider's flames burned her Inhuman body to a crisp, finally killing her.  The agents' victory did not last long, however, as they were taken into custody and thrown into a dystopian future in deep space. 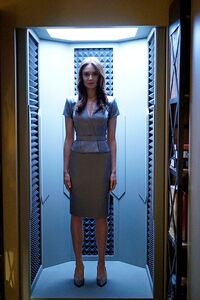 Aida using magic to save Coulson and Fitz. 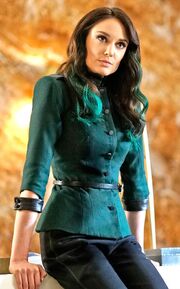 Retrieved from "https://villains.fandom.com/wiki/Aida?oldid=4126898"
Community content is available under CC-BY-SA unless otherwise noted.