Give information to the LCPD to lower his sentence (failed)

Aiden O'Malley is a minor antagonist in Grand Theft Auto IV, being the main antagonist of the mission "Tunnel of Death".

He was voiced by Jarlath Conroy.

Aiden O'Malley was born in 1959 or 1960 and raised in the country of Ireland where he eventually became good friends with Derrick McReary and also began working for the IRA, a known terrorist group within Ireland and the United Kingdom. In 1995, after Aiden had moved to America, he was arrested for being involved in a string of robberies after Derrick turned him in for the reward money to buy drugs. Aiden was then sentenced to prison for the next twenty years.

In 2008, in order to prevent Aiden from giving information to the LCPD that would put Derrick in prison, Packie McCreary enlists the help of Niko Bellic in stealing two large trucks and blocking a police blockade from both sides inside a tunnel, then killing all of the guards. Niko and Packie steal the van Aiden is being held in and after escaping the police, steal another car to take Aiden to the cliffs in Leftwood, claiming they're with one of Aiden's old friends who are helping him escape the country.

After arriving at he cliffs, Aiden asks who it was that helped him escape, to which Packie reveals it was his brother Derrick. Aiden is left shocked as Packie then orders Niko to kill Aiden. After shooting him, Aiden's body falls into the ocean, never to be found again. 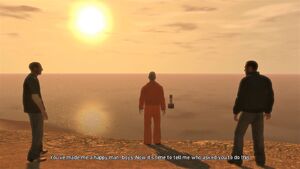 Aiden after being freed by Niko and Packie. 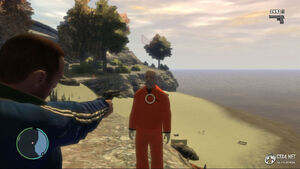 Niko aiming his pistol at Aiden, moments before killing him.