Become a god (both failed).

Aido Kagerou is the main antagonist of Junji Ito's manga Travelogue of the Succubus/Sensor. He is the leader of the cult called Indigo Shadow who tries to unravel the secrets of the universe by trying to kidnap the mysterious woman with long, gold hair named Byakuya Kyoko who has the clairvoyance powers and the key to open the Akashic Records in order to become a god.

Aido at first appears as a rather charming man with long, black hair and rather weary eyes and also has his shirt and pants colored in black all over. However, after he survived the ritual that nearly killed him due to the God that he worshiped giving him a second chance to live and another power, his face suddenly became bandaged and underneath those bandages lies a rather monstrous face as his hair becomes even more curlier. As a mysterious wandering monk in the Edo Period where religions are prohibited, he wears an outfit similar to a Japanese wanderer back in Edo Period.

Aido at first appeared as a rather polite man who knows everything due to the awakening of his powers by the God of the Dark Beyond and the Akashic Records that he opened thanks to Byakuya Kyoko's clairvoyance powers. However, despite his seemingly fanatical devotion towards the God of the Dark Beyond, it was soon revealed that Aido is merely a man with a twisted God Complex who tries to become the next creator of the Universe after he accessed the Akashic Records successfully with the help of Byakuya Kyoko's clairvoyance powers and shows no empathy when seeing the people he executed in order to become the God of the Universe.

Aido and his cult, Indigo Shadow, was first introduced by capturing the mysterious beautiful girl with golden hair who was awaken from her slumber from the Sengoku Mountain eruption, Byakuya Kyoko, and a reporter, Wataru Tsuchiyado, during the latter's pursuit on Byakuya in order to interview the weird things that happened in the Sengoku Mountain such as the jet-black cloud that appeared before him. It was then revealed that Byakuya Kyoko is the girl during Chapter 1 who traveled through a village near Sengoku Mountain known as Kyokami Village as they worshiped an entity known as Lord Amagami or better known as the Jet-Black God from Outer Beyond which resulted in Byakuya Kyoko partaking in the ascension ritual performed by the villagers to meet with him as the villagers possibly ended up being devoured by Amagami with his sable hair which also resulted in Byakuya Kyoko having a slumber for the next 60 years, gaining a power of clairvoyance.

After he and his cult captured Byakuya and Wataru, he revealed himself towards them while tying Byakuya Kyoko in a cross in order to obtain her clairvoyance powers which is a key to open an Akashic Records, a library that consists of all of the universe's secrets. He orders all of his cult members to meditate in order to retrieve an Akashic Records which took the shape of a jet-black cloud that Wataru tried to investigate earlier. However, Byakuya then warns the cult members that their efforts are futile and it will contain severe consequences. Aido, ignoring Byakuya's warning, continues to meditate along with the rest of the cult members which resulted in them getting crushed by the Akashic Records.

However, it was revealed that Aido Kagerou survived the incident with his face getting bandaged after the incident due to the severe burn marks that he had in his face as he was saved by Lord Amagami itself but left his old cult members crushed by the Akashic Records. After surviving, he then amasses a brand new cult members for Indigo Shadow in order to start anew, including Wataru's psychotic stalker, Beniko Yamaoka. Still determined to know the secrets of the universe, he then orders his cult members to fine-tuning the curved mirrors across Japan by committing several series of hit-and-run towards the pole of the curved mirrors which also causes mass hysteria towards people across Japan in order to make their mark known not only across Japan, but also the world and the universe. In addition, he and his cult members also kidnapped several innocent people that Wataru had met before because of their encounter with Byakuya Kyoko in order to track her whereabouts such as Dr. Kurodera who was revealed to be the survivor of Mt. Sengoku eruption that happened 62 years ago that emits the jet-black hair bestowed by Lord Amagami which killed several people in Kyokami Village.

After the cult members captured the innocent people who had encountered Byakuya including Wataru himself and waiting for the Sengoku Mountain erupted again, Aido then orders his cult members to perform an excruciating ritual towards the innocent people, with Wataru being one of them as Beniko becomes his mating partner, by staring and meditating towards them in order to track Byakuya Kyoko's whereabouts. As the Sengoku Mountain erupted, both the cult members and the innocent people were covered in jet-black hair that were extracted from the eruption. As the ritual was finished, the cultists became much more insane and the innocent people that they projected themselves into had their bodies shriveled into becoming nothing but skeletons. At the same time however, Wataru manages to escape from Beniko's grasp and transported himself to the Edo period in a different universe.

After meeting Byakuya Kyoko for the second time, it was soon revealed that Aido was also transported to the Edo period, the period where religions are banned, and disguises himself as a mysterious wandering monk. Telling the shogunate during the period about the hideout location of a Christian missionary named Miguel and his followers which includes Byakuya Kyoko, it was soon revealed that Aido's intentions is to execute them one by one by making them jumping into the Sengoku Mountain with them being tied by a crucifixes while climbing the mountain.

Before Miguel and his followers were kicked into the Sengoku Mountain, he asked Miguel about the person who created the universe. When Miguel answered it was the God Almighty who created the universe, Aido then scoffs Miguel's answer as he said that it was going to be him that will create the universe from the scratch by attempting to get Byakuya's clairvoyance powers for the second time after he executes Miguel, his followers and Byakuya and reveals his true, nightmarish face. However, Byakuya then kills him by shooting a powerful beam light. Despite Aido's defeat, Miguel, Byakuya and the rest of Miguel's followers disappeared into the darkness as they jumped into the Sengoku Mountain and Wataru himself returned to the present day. It is possible that in the end, Aido himself is reincarnated as an evil Lord Amagami during the first chapter as they were devoured by Amagami by his sable hair during their ritual of ascension.

Being the leader of the cult, Aido Kagerou has several powers on his disposal that made him a rather intimidating figure such as: 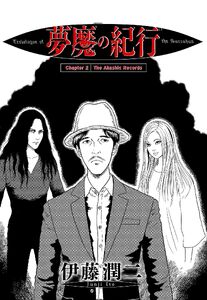 Aido (Left) as he appears in Chapter 2's cover of the manga. 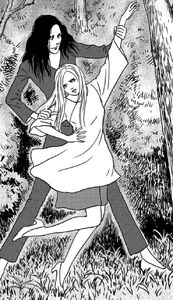 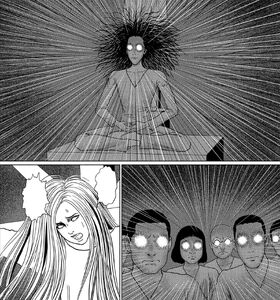 Aido and his cult meditating. 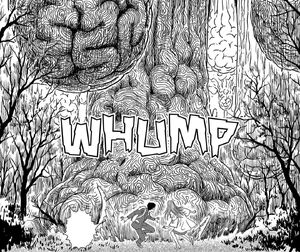 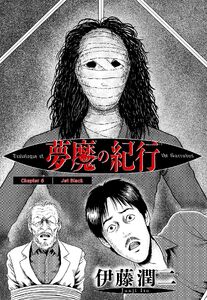 Aido's face bandaged as he appears in Chapter 6's cover of the manga. 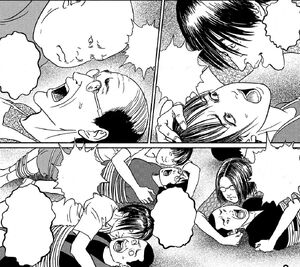 The members of Aido's cult attempting a horrific ritual by meditating. 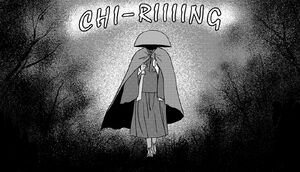 Aido disguised as a mysterious wandering monk during the Edo Period. 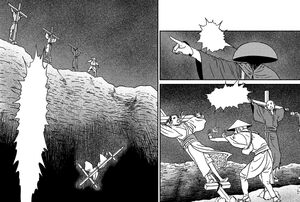 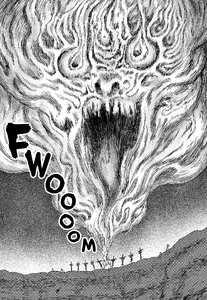