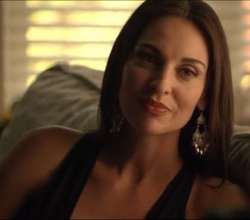 Aife is the main antagonist of the first season of the television series, Lost Girl.  She is portrayed by Inga Cadranel.

Aife and her father, Trick, were Light Fae of Clan Finn Arvin. She is also the mother of Bo, the series protagonist.

Trick, who was the Blood King had the ability to make events come to pass by writing with his blood. But it always came at a price. In this case, Trick used his blood to write the laws of the Fae to force an end to the Great Fae War. The price was Aife. She refused to let go of her hate and assassinated a Dark Fae Noble. She came to her father and begged him for sanctuary. However, doing so would have caused another war, so he reluctantly gave her to the Dark for execution.

Unbeknownst to Trick, however, the Dark did not execute her. The Dark King thought killing her would be a waste and so instead, she was imprisoned and sexually abused for many centuries. Aife eventually escaped and planned revenge on her father and all the fae ever since.

At one point, under the name, Saskia, she encountered Bo who was on a case investigating the suicide of a human. Bo was really excited to meet one of her own kin. Bo learned that succubi could breathe her chi back into those who were injured.

Bo learned from "Saskia" that the suicides were done by an Albaster, the succubi's natural enemy. After discovering the Albaster, Bertram, they captured and playfully tormented him for a while. Bo then learned of "Saskia's" true nature when she drained Bertram's life force, killing him. Bo tried pleading with her to no avail. Their friendship came to a quick end.

Bo met "Saskia" again attacking her then-boyfriend, Dyson. After fending her off, Bo learned of "Saskia's" real name and that she is her mother.

Despite Trick and Dyson's protests, Bo set out to find Aife and hear her side of the story, only to be later drugged and captured by her. Waking up in Aife's house, she found that Aife had strong men who followed her every whim (Bo would later learn in Season 2 that she and Aife can enslave people with their blood.) After talking with Aife for a while, Bo learned that Aife planned to overthrow the Light and the Dark. At that same moment, one of Aife's thralls attacked the Light Fae council in a suicide bombing. Realizing that Trick and Dyson were right, Bo escaped and prepared herself for battle.

Bo went back to Aife's home, this time armed and prepared, and attempted to reason with her, but Aife would not listen. They engaged in battle. Initially Aife had the upper hand, but Bo ultimately won with the indirect help of Dyson, (who made a deal with the Norn, an ancient fae woman who granted people their deepest desires in return for what they love most, to lend Bo his strength) and Trick, (who used his blood writings to cause Aife to stop fighting). Aife then let herself fall to the ground. Bo then saw an unknown figure carry her away.

In Season 3, the unknown figure was revealed to be Dr. Isaac Taft, a scientist who performed horrific experiments on Fae. Aife had lost much of her sanity while in Taft's prison.

Retrieved from "https://villains.fandom.com/wiki/Aife?oldid=3532313"
Community content is available under CC-BY-SA unless otherwise noted.