Sorrowful Knight Aigaron is a knight of the Deboth Army and a major antagonist in Zyuden Sentai Kyoryuger. As the Sorrowful Knight, he cries all the time but has fierce tactics and fights with a battle axe.

Aigaron is the first of the Deboth Army's generals to be revived, donning a cloak, Aigaron went to Europe to steal a gem. In the process, Aigaron murdered Ian Yorkland's friend Shiro Mifune.

Aigaron later launched a full assault on the Kyoryugers while they were without Daigo. Due to Hyogakki's plot, Aigaron couldn't cry lest he gets frozen, so decided to use a new emotion: anger. He eventually became so angry, that he glowed red at one point and exploded in a last attempt to get rid of the Kyoryugers, though they were saved by Ian's quick thinking.

Much to Ian's frustration at Aigaron, it later turned out that Deboss had saved his life when he exploded. However, Aigaron had suffered a mental side effect from self destructing, becoming extremely psychotic and gaining black eyes and tar-like tears whenever he got mad. It is only his feelings for Candelilla that Aigaron caused to attempt self restraint when he is about to be consumed in rage.

After Deboth had evolved into his newest form, Aigaron overheard the leaders of the Deboth Army discussing Luckyuro running away and Candelilla running off to find her. After hey agreed that Candelilla needed to be destroyed and they discovered Aigaron listening in on the meeting. It was then revealed that the two new knights, Icerondo and Killborero, were to be replacements as knights of Joy and Sorrow. Aigaron escaped the Frozen Castle and found Luckyuro and Candelilla, warning them of Deboth's plan for them.

The three were pursued by Icerondo and later ran into the Kyoryugers. Aigaron pleaded with the Kyoryugers to protect Candelilla and Luckyuro, as they never killed any humans. Icerondo then revealed that Aigaron had died when he exploded, but because his armor was so strong, his soul was trapped inside it and did not pass on. He was brought back by Chaos's power as an undead servant, which was why he had psychotic episodes of rage. Icerondo then mocked Aigaron, telling him that as an undead being, all the emotions of love he's been feeling aren't real. He then tries to kill Candelilla, but Aigaron takes the hit, mortally wounding him in the process. As Candelilla and Luckyuro mourn over him, Aigaron confesses his feelings of love to Candelilla. Ian then approaches Aigaron and drills through Aigaron's armor, breaking it and releasing Aigaron's soul.

Shortly after, Ian and the others then attacked Icerondo in a rage, with Ian using Aigaron's axe to deal the final blow. Ian stated that the axe holds more sorrow than Icerondo could ever handle, causing the axe to cry, and implying Ian has forgiven Aigaron as Icerondo collapsed and exploded.

In the year 2114 Remorseful Knight Arslevan takes Aigaron's body, and puts a new soul into it, reincarnating him into Jealousy Knight Hoshigaron.

Aigaron wields a short one-handed blue ax decorated with eyes on the flat sides of the weapon. His fighting style usually consists of him having his arms close to his body in a Muay Thai style. He is not hesitant on using his kicks in a close-combat fight. 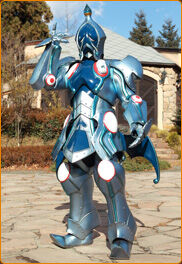