He was designed by Dr. Wily for combat. His design was unusual, yet intimidating, as he had his face built on his torso rather than on a head. This design would be used for other Robot Masters later in the series. Using the propeller in his torso, he can generate powerful winds, which he generally uses to push or pull his opponent towards him during his fights.

Air Man is egotistical and pompous. He likes to talk about how great he is for a long period of time, which usually bores his friends. His hobbies include Wind Surfing and playing the Japanese card game Menko (which he is rather skilled at). He has a strong dislike for autumn because the falling leaves clog up his propeller.

Air Man is basically considered as one of the hardest bosses in the Mega Man series. His stage takes place in the sky. During the battle, he creates six tornadoes and shoots them in Mega Man's direction. He will jump to the other side of the room after doing this process three times and then repeat it. Air Man's weakness is the Leaf Shield. 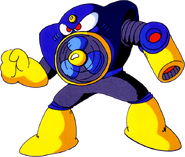 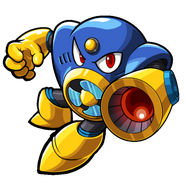