Plunder and take over Cape Suzette.

Greedy Pirates
The Air Pirates are recurring antagonists of the 1990 Disney cartoon series TaleSpin. They are the minons of Don Karnage, serving as the arch-nemesis of Baloo.

They also appeared in the DuckTales reboot episodes "Sky Pirates...In the Sky!" and "GlomTales!"

As the gang serving for Don Karnage, the Air Pirates' long-term goal is to plunder the city of Cape Suzette, but they are often thwarted... either by the cargo pilot Baloo and his navigator Kit Cloudkicker, by the pirates' own incompetence, or by the defenses of Cape Suzette, most notably the cliff guns. Most prominently featured among Karnage's pirates are Mad Dog and Dumptruck, as they most regularly accompany Karnage.

Most of the Air Pirates' schemes involve taking over Cape Suzette. In the "Plunder and Lightning" story arc, they stole a valuable gem that generates electricity, and Karnage exploits the gem's power to power a weapon that causes so much damage to many buildings around Cape Suzette. Another time was in the episode "From Here to Machinery", when they learn that Shere Khan is replacing all pilots with robots called the Auto Aviators (created by Professor Torque), and upon learning that the robots cane never deviate from their programming, they exploited this in an attempt to hijack Khan's airplan. Another time was in "A Bad Reflection on You", where they exploited the usage of mirrors to stage disappearances of pilots (including Khan's very own pilots) during their travel through a dangerous air route called the Master Run.

The Air Pirates appeared in the episode "Sky Pirates...in the Sky!", where they launched a raid on the Sunchaser. While Scrooge, Webby and Huey, Dewey and Louie prepare for battle, the Air Pirates distract them with a song and dance number while robbing them blind and escaped afterwards. Back in the Iron Vulture, they soon learned that Dewey has stowed away to regain his hat. However, Dewey ends up befriending the pirates, who turned against Karnage and made Dewey their captain, though they end up turning against Dewey before Karnage regained his role as their captain. However, the Air Pirates end up crashing their plane at a mountain while the heroes escape, leaving an angry Karnage to curse Dewey for his actions.

They reappear in "GlomTales!", where they didn't team up with Flintheart Glomgold, Ma Beagle and her Beagle Boys, Mark Beaks, and Magica De Spell to exact their revenge against Clan McDuck. 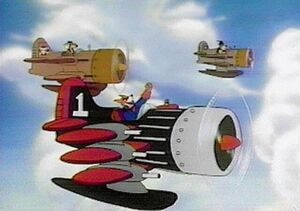 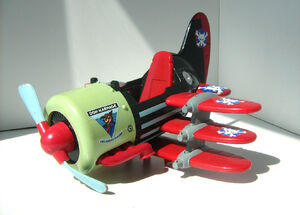 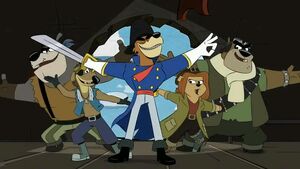 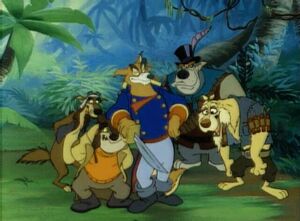 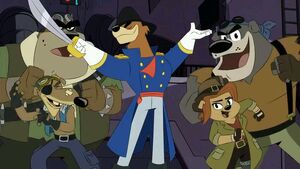 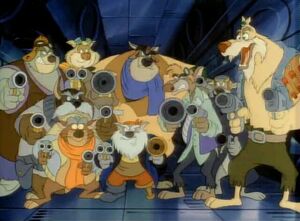