Expertise in the field of torture

Kill Arcee and everyone whom she loves, including Tailgate and Jack Darby.

Collect and kill every rare species in the galaxy, including humans.
Overthrow and kill Megatron.
Destroy both the Autobots and the Decepticons.

She was a former Decepticon and Megatron's rogue commander who left and decided to hunt endangered species just for the thrill of hunting. She originally took the form of a half-spider creature, but recently, in order for her to escape, she took the form of a helicopter. She is also Arcee's arch-nemesis, due to murdering her first partner, Tailgate and hunting her human partner, Jack, like an animal.

She was voiced by Gina Torres, who also played Jasmine in the Buffy the Vampire Slayer spin-off Angel and voiced Superwoman in Justice League: Crisis on Two-Earths (later reprising the same role in Lego DC Super-Villains).

Arcee and Jack were investigating the crash landing of Airachnid's ship when they encountered her. She entrapped Arcee again and this time attempted to capture Jack in order to claim his head as her trophy. Jack evaded Airachnid and succeeded in blowing up the ship along with Airachnid. She survived and retreated underground.

When Airachnid was surrounded by the terrorist group, M.E.C.H., she made a deal with them: if they helped her capture both Jack and Arcee, she would let them dissect Arcee so they could learn more about Cybertronians. Doing so, they captured Jack's mother and forced Jack and Arcee to meet at a warehouse. Airachnid struck a deal with Jack: if Jack could rescue his mother before midnight, she would release both of them (notably not promising that Arcee would be released). Jack managed to call Agent William Fowler while searching for his mother. When Arcee broke free of Airachnid's web and got away from M.E.C.H., she rescued both Jack and his mother while fighting Airachnid. When Fowler came with a small army, Airachnid took the form of a helicopter and retreated, again.

Airacnid appeared again, seaching for a Polarity Gauntlet. But another Decepticon named Breakdown was searching for it as well, to prove his continued worth to Megatron. They formed a temporary alliance to fight Arcee and Bulkhead, but were defeated and magnetized together by the Polarity Gauntlet, forcing Airachnid's return to the ranks of the Decepticons.

In One Shall Rise, Part 3, Megatron went into the core of the Earth to stop Unicron from taking over the planet so that he could conquer the planet himself. Airachnid wanted to abandon Megatron there and demanded that a course be set for Regulon 4, thus attempting to take control of the army. The attempt was blocked by Soundwave; Airachnid tried to attack him, but Soundwave's speed and strength prevented her from reaching the ship controls. She announced, "I'll tear out your spark for that!" before Laserbeak came out and shot her down with his lasers. This left her defeated with Soundwave resuming the search for Megatron.

She later left Megatron and the Decepticons, dismantled Breakdown when he and Dreadwing came after her, and found an army of Insecticons, thus creating a separate faction and becoming one of the main villains. She tried to kill off her nemesis Arcee, but Starscream got to Airachnid first. She attempted to kill Megatron with an Insecticon, but he soon overpowered and destroyed it. She was attacked by Arcee, but fled. After sending her entire army after the warship, Arcee tracked her down and battled her one final time, resulting in Airachnid falling into an Insecticon stasis pod and getting sealed inside, completely frozen, ending her role in Season 2.

Her frozen body later discovered by the Decepticons when they were scavenging the remains of the Autobots' base, but did not revive her for her past actions. While it appeared that her comeuppance for her evil actions (including either killing Tailgate in cold blood or did similar thing on June Darby) was to remain frozen in the stasis pod, her later fate proved to be worse than her own actions.

Chaos ensued on the Nemesis as a result of Starscream’s foolishness in meddling with the experiment where they combined the Dark Energon and imperfect Synthetic Energon in Cylas. The resulting compound ended up turning Cylas into a Terrorcon. During his rampage, he infected a number of Vehicons on board and freed Airachnid from her stasis prison. Upon gaining her freedom, she killed who she believed to be Breakdown and proceeded to tear open his chest, only to discover the dying Cylas inside. Cylas thanked her for putting him out of his misery, which only prompted her to mutter, "Whatever".

Having gained her freedom once more, she retook control of the Insecticons on board the Nemesis. She instructed them to destroy all of the Decepticons. However, the group first encountered Soundwave, who used the space bridge to transport them all to one of Cybertron's moons. Having been infected by Cylas while fighting him (via a small scratch on her neck), Airachnid soon became a Terrorcon herself. She then ordered the Insecticons to approach and serve their queen, as she drained their Energon. 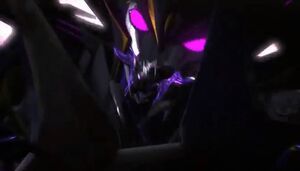 Airachnid in her Terrorcon form as she drained her minions' energon. 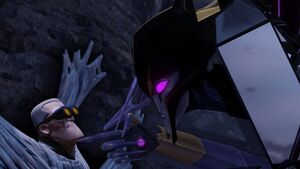 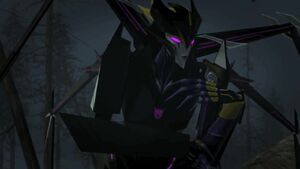 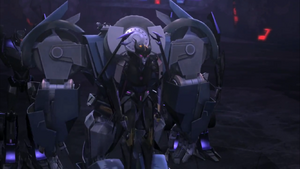 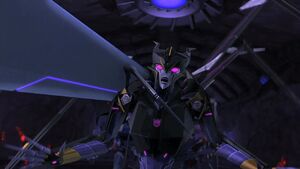 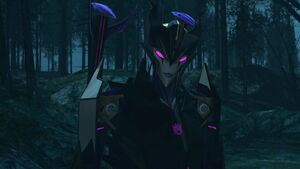 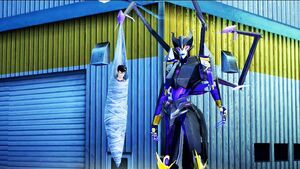 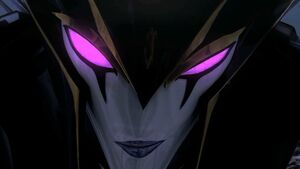 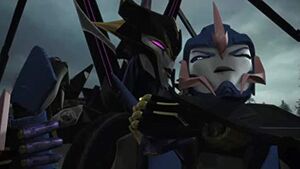